A lack of melody is good for the soul.

In the absence of popular music’s dominating thread, the full dynamic possibilities of every other sonic parameter can be explored. Just as the image of artist Sir Frederic Leighton’s Flaming June feeds the insipid house fire in UK outfit Nurse With Wound’s suburban trauma visuals, a potentially over-consuming foreground is destroyed, allowing the texture of the background and antique frame to shift into focus.

First up at Saturday’s Unsound concert at the Queen’s Theatre was UK composer Lee Gamble, manipulating dissonant sub-bass grooves and R2D2 blips. The screen behind undulated like a series of endlessly evolving Rorschach images bound to both the abstract and rhythmic elements of the sound, which was a disemboweled techno experiment with the feel of a mystery stroll into a mechanical mind.

William Bennett, known for his work in ’80s extremist outfit Whitehouse, eased into his set as Cut Hands (his current solo project) with the voodoo-possession ambience of “Witness the Spread of the Dream” from 2012’s Black Mamba. This set up the cold clashing beat and chime of the next track, “No Spare No Soul”.

Bennett, an elder industrial wolf, grooved and sarcastically fauned while his cascading, nihilistic bombast hammered the crowd. There were several all-out, high-speed bangers, though, such as “Madwoman” from 2011’s Afro-Noise 1 album.

This Englishman in black is the electronic priest in a voodoo ritual at an Apple Mac plinth beneath a towering altar – the screen, which flashes mobile silhouettes of a scissor-wielding Nubian goddess, a dancer, a black cat and scrolling transcripts of esoteric chants.

Re-entering the hall after time had eaten its way through three cigarettes, I discovered the atmosphere was absolutely transformed. A cosy, mellow vibe had beautifully infiltrated the venue. 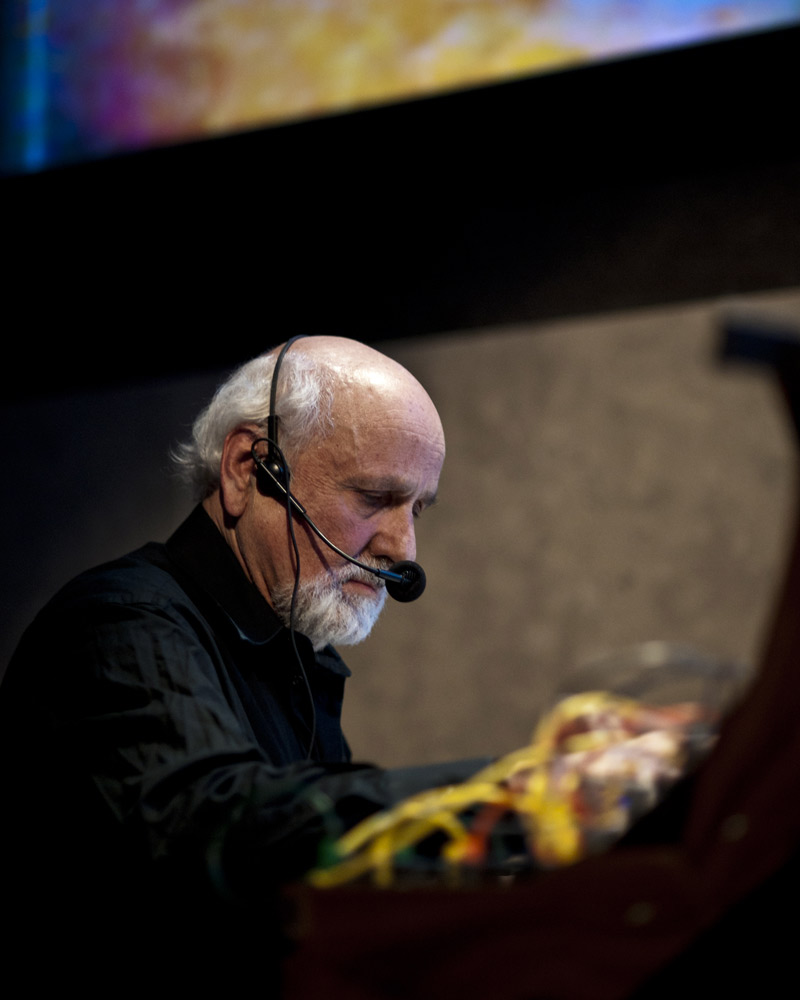 Vintage space bleeps and warm planet-hopping synth punctuated the now-screenless dark. Even through such rudimentary wares, the funnelling of a harmonious personality into electronic sound had occurred seamlessly. Towards the climax, the abstract swathe became rhythmic and built up into warm, holistic techno bubbles.

This was the crescendo of electronic music pioneer Morton Subotnick’s 1967 album Silver Apples of the Moon, sounding fresh like potent light beams arriving as-new from a distant galaxy they left almost 50 years ago.

The journey toward Nurse With Wound’s performance had been long and twisted, and when Hungarian vocalist Attila Csihar (Sunn 0))) / Mayhem) made his appearance, it was clear they planned to deliver. The sparse crashes and creeps of NWW’s beginnings gradually whirled up into an electric fire seance with Atilla’s ultimate vocal range at the helm – from searing high-pitched eagle calls to the deepest, gnarliest oak-encrusted tones. He was an undead space pharaoh standing before the pyramid of NWW on a plain of creeping sonic terror.

For their finale, Nurse With Wound switched obliquely into the dubbed-out repetitious “Rock n Roll Station” and introduced the first guitar of the evening, which devastated.

This concert was part of a series of Unsound Adelaide performances in the Adelaide Festival.