Improv Now’s Theatresports show was a sell-out success last year, and judging by audience numbers on Sunday, it’s likely to repeat that achievement again this year.

The four teams compete under the somewhat dubious names of Scriptease, The Dick Van Jennifers, Wolf and The Creeks, and Simon and The Fury.

Those familiar with the popular TV show Whose Line Is It Anyway will instantly relate to the talent of the performers, who have little or no time to adopt a character or situation and begin acting out scenarios given to them by the audience. 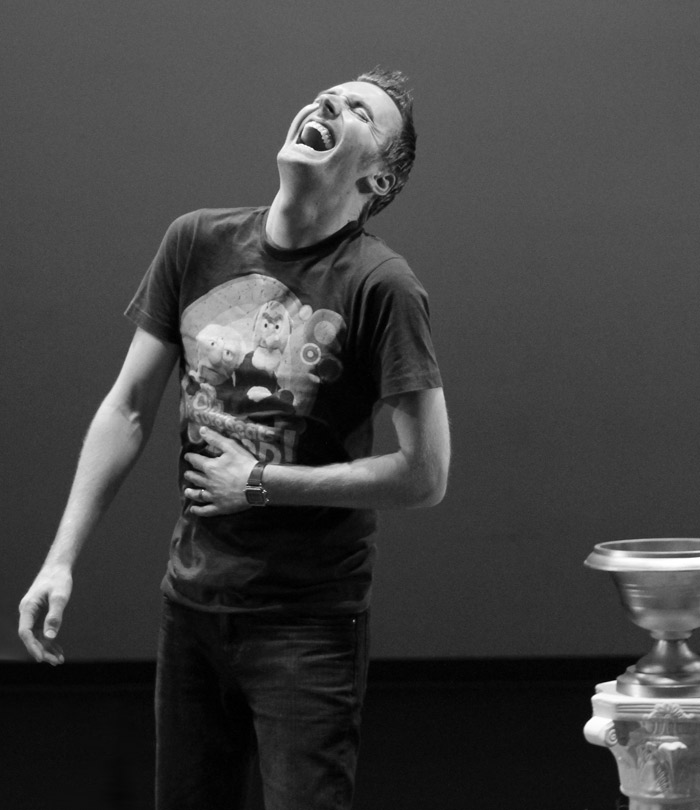 Imagine, if you will, monosyllabic Shakespeare with Russian accents set in Byron Bay … or perhaps an interview with a two-headed, single-voiced expert on the subject of astronomy. This gives you an idea of Theatresports improvisation.

Host and compere Phil Cowie does a great job of maintaining order for the (almost) two-hour show, while judges “Mish” and “The Hanging Judge” (Boo Hiss) silently impart their scores at the end of each scenario.

What I particularly like about this show is the self-enforced discipline, which keeps it family-friendly, a rarity in typical Fringe shows.

For the performers, Clash of the Theatre Titans is an opportunity to hone their improvisation skills. All are involved in other Fringe shows, so this is like a good excuse for getting together on a Sunday afternoon and having fun.

Fun is indeed the word, and the very nature of improvisation means that it’s mostly unexpected and all the funnier for being so.

Adding some musical dramatic texture on the keyboard was Sydney-based musician Bryce Halliday, who volunteered his services to be part of the show.

For the record, Simon and The Fury were last Sunday’s well-deserved winners.

Adelaide 2014 Theatresports Clash of the Theatre Titans is playing at Palace Nova in Rundle Street at 2pm every Sunday until March 16.