In 2010 the earth’s crust moved three centimetres under an Icelandic icecap. The ensuing volcanic eruption spewed ash hundreds of metres into the air, closing airspace over 20 countries and disrupting a multitude of travel plans: a small tectonic movement with dramatic consequences.

One year later, a brilliant young Israeli conductor took over as music director of the Iceland Symphony Orchestra. A passionate supporter of experimental music, Ilan Volkov had a keen understanding of how small shifts can signal radical changes. How in 1952, for example, John Cage’s “silent” work 4’33” re-defined the word “music”. And in Volkov’s role as curator of the Tectonics Festival, he has been trying to re-define the role of the symphony orchestra in the 20st century.

The first Tectonics Festival (in 2013 in Iceland’s capital, Reykjavik) emerged from Volkov’s dual roles as symphonic conductor and experimental music promoter. He co-owns a small Tel Aviv club where, in between orchestral engagements, he showcases cutting-edge improvising musicians such as Oren Ambarchi, Stephen O’Malley and Jon Rose.

Volkov has also been curious to find out if “an orchestra, the 19th-century beast, (can) be more radical and experimental”. The only way to find out was to bring his two musical worlds together. “Hence the tectonics idea,” he says, “of two plates crashing into each other.”

“At 26 he was the youngest-ever chief conductor to be appointed to a BBC orchestra. The players fell in love with him,” says Lord.

“He was like a whirlwind in Glasgow. Such incredible energy, always questioning why we were doing things in certain ways and suggesting new genres of concert-giving.” 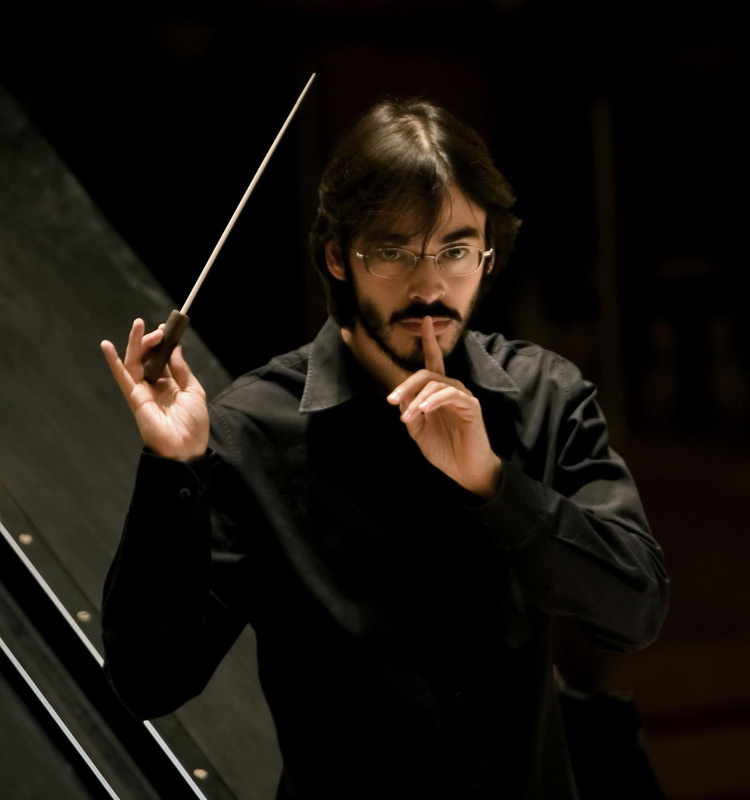 Two years ago, Lord introduced Volkov to Adelaide Festival artistic director David Sefton. As a result of their meeting, the decision was taken that the Adelaide Festival would host the first Australian incarnation of Tectonics.

“It’s similar to the approach I took with the Meltdown festival in London, having a high-profile artist curating the program and asking: ‘What are you allowed to do with an orchestra?’”

One answer to that question will be revealed when Australian electric guitarist Oren Ambarchi performs with the double bass and brass sections of the ASO and the Speak Percussion ensemble. The work will be amplified, largely improvised, and conducted by Volkov using a series of hand signals.

Ambarchi’s approach to the Tectonics metaphor is a physical one: “I like to use lots of low-end, sub-harmonic frequencies when I play. It can make the space resonate; shake the room in a seismic way.”

With fellow guitarist Stephen O’Malley, Ambarchi will also perform a piece by American composer Alvin Lucier which premiered at Glasgow’s 2013 Tectonics Festival. Lucier is perhaps best known for his 1965 work “Music for Solo Performer”, for which he attached electrodes to his scalp and used percussion instruments to “play” the alpha waves generated by his brain.

Ambarchi explains: “Ilan asked Lucier if he’d like to write something specifically for the two of us, and he agreed. Lucier has been doing beautiful, innovative things since the ’60s. His work is so simple, almost like a scientific experiment with sound, but the results are mysterious and mystical. They’re also ego-less, in that he sets it up for something to happen without interfering too much. A lot of composers seem to need to express themselves all the time, but it’s not always necessary.”

The mystical qualities of Lucier’s work will resonate with Volkov’s unofficial theme for Adelaide’s Tectonics Festival.

“I’m interested in how composers in the 20th century and today have been exploring the idea of rituals,” says Volkov.

“Both Iannis Xenakis and Giacinto Scelsi are working with an almost pagan ritualism. Scelsi’s pieces have a way of concentrating on one note so that it feels like ancient music, with a very powerful force. Lucier also has a ritualistic way of doing music, distilling sound until the listener is in a state of trance. It’s not an outward pouring of happiness, more a kind of spiritual search.”

Volkov has programmed two works by the late Australian composer David Ahern, including “After Mallarme”, written in 1966 when Ahern was only 19.

“Ahern was an amazing pioneer. He worked with Stockhausen but he died young and had no one to champion his music, so he is rarely played in Australia.”

The program also includes a new commission by Elena Kats-Chernin for the Adelaide Symphony Orchestra with improvising soloist Jon Rose.

Lord admits the orchestra could be challenged by some of the contemporary works.

“Some of the techniques are going to be quite new to them, even quite shocking. I don’t think this orchestra has played a huge amount of Xenakis, for example, so it’s going to be quite a journey for some players. But they’re professionals, they will approach it as they’d approach a Beethoven symphony.”

Lord says without the partnership between the ASO and the Adelaide Festival, the orchestra wouldn’t have been able to present such a challenging program.

“With a festival audience you can present new cutting-edge work and sometimes you can even be allowed to ‘fail’. You don’t know what will happen with a world premiere. Some great composers have written works that have ‘failed’ in their first performance, but it’s one of the things orchestras need to be allowed to do.”

Volkov agrees: “There is a lot of risk-taking in the program. It will be demanding, but you can’t worry about the audience getting tired.

“People can come in and out if they want, but it will always be changing. We’ll have strong, beguiling and magical performers, mixing acoustic, amplified, electronic, orchestral, visual and vocal performances, so you’ll get an amazing and emotional experience of what music can be.”

Sian Prior is an arts journalist, broadcaster and musician commissioned by the Adelaide Festival to write about the Tectonics series.

Tectonics Adelaide will take place on March 9 at the Grainger Studio and March 10 at the Queen’s Theatre during the Adelaide Festival.