Whether a small balcony, private garden, shared rooftop or public open space, there is no question that access to green outdoor spaces has become a priority in the COVID-19 climate-change era.

As temperatures rise and our cities become more densely populated, innovative ways of incorporating green elements into the built environment are emerging to provide a key role for landscape architects in South Australia. Each year the Australian Institute of Landscape Architects (AILA ) awards program showcases outstanding examples of this important work, and this year is no exception.

Access to open space is essential to our physical and mental health, as these shared spaces connect us with Country, inspire us, and bring us together. This is nowhere more evident than at Wangayarta, the 2ha memorial park co-designed by the Kaurna Yerta Aboriginal Corporation, members of the broader Kaurna community and Oxigen, to create a culturally safe place for the sensitive repatriation and reburial of Kaurna ancestors disturbed from their original burial locations. At the forefront of the concept was the idea of spreading soils from across the Adelaide Plains where those ancestors once walked.

Nine sandstone boulders carved by Alan Sumner mark the entry to the park, which includes a central lawn ceremony area in the shape of the Kaurna Shield, a symbol of protection. Four burial areas on the edge of the lawn reflect the size and extent of Kaurna Country, commemorating the challenges, fortitude and tenacity of Kaurna People, so that truth-telling is clear and reconciliation authentic. 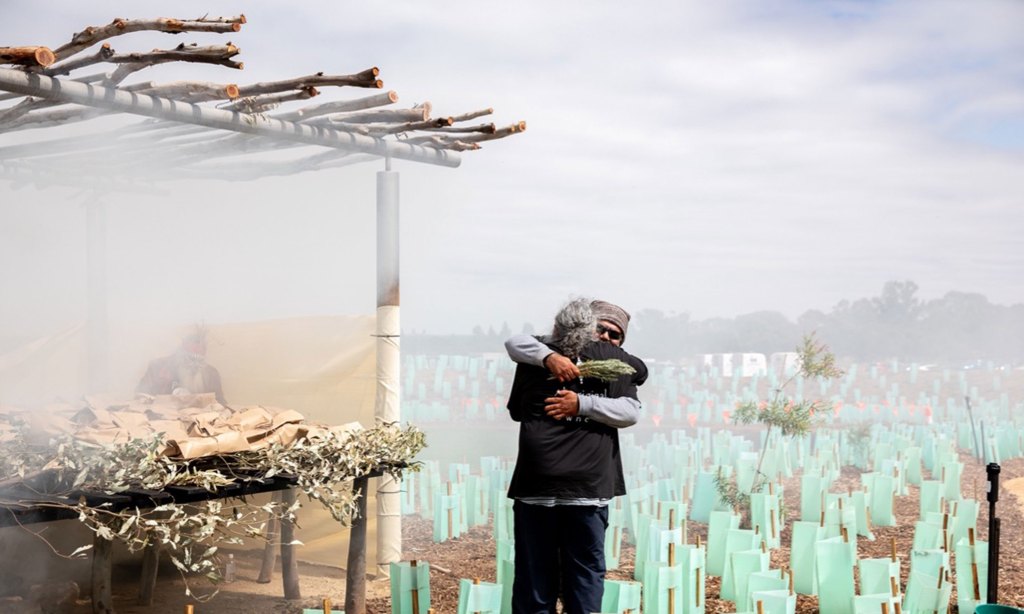 Growing cities, and specifically Adelaide’s middle and outer-ring suburbs and peri-urban areas, are too often the legacies of poor urban design. Car-centric, they are hotter, with lower levels of tree canopy and pedestrian amenity, and lower levels of biodiversity and habitat protection than the city’s older inner rim. This has been made worse with the watering down of South Australia’s once world-leading tree protection laws over the past 10 years.

The 2022 AILA SA President’s award recognises the work and advocacy of the Conservation Council of South Australia in highlighting these issues, and many of the 2022 award winners showcase plans and projects that incorporate quality green landscapes and low-carbon active transport into new developments.

ASPECT Studios’ North-South Corridor: Regency Road to Pym Street (R2P) Green Infrastructure Plan guided the design and delivery of urban amenity and greening in the context of construction of a dominant multi-lane road corridor. Its landscape plan resulted in thoughtful plantings and visually stimulating public art elements around cycling and walking paths, paving the way for a larger role for landscape architects in the planning of major transport infrastructure in South Australia. 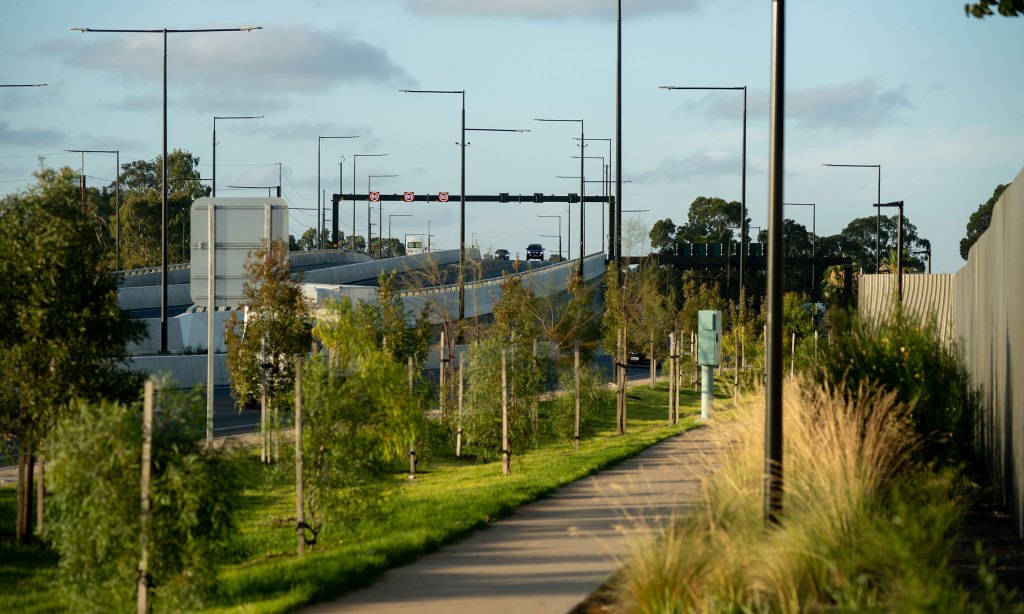 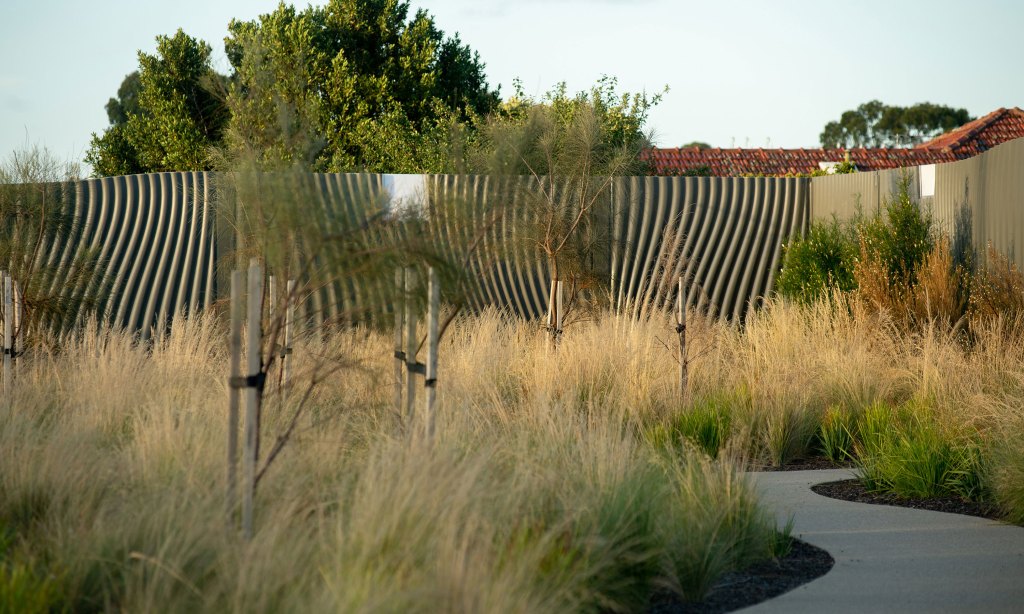 At Port Pirie, a collaboration between SA Water, Aurecon and Water Sensitive SA set out to steer policy change in a town with a severe lack of shade and an abundance of dust. Ever-increasing fuel prices in this car-reliant town further emphasised the need for cooler and more walkable streets. 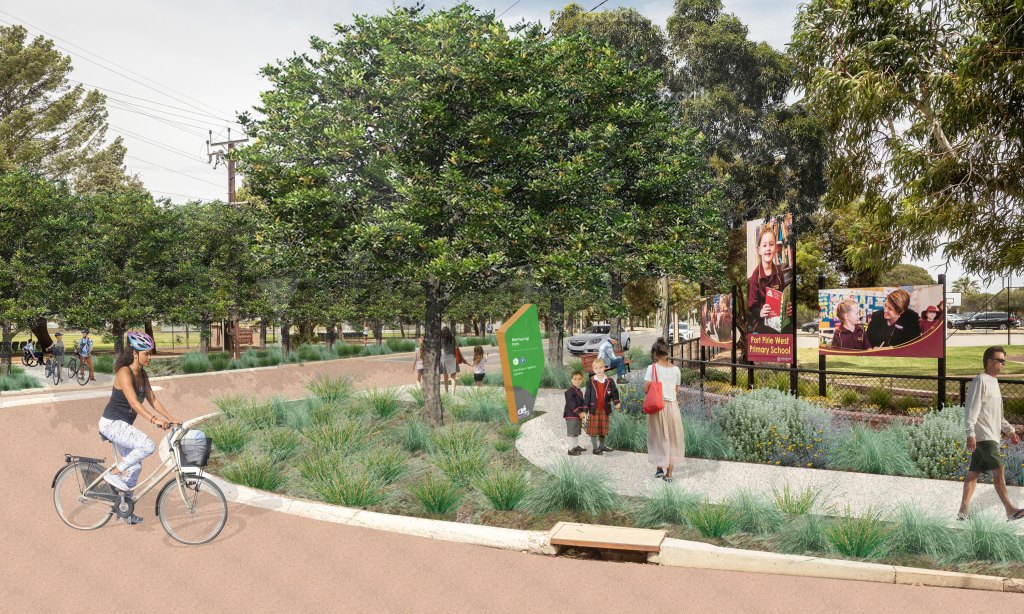 ASPECT Studios’ design for the Lightsview Linear Park similarly integrates storm-water management, wild spaces, wetlands, a lake, an adventure playground, and cycle and walking paths into a large medium-density housing development. The park demonstrates how a shared commitment from developer, council and design team can turn an infrastructure project into a valued community asset.

The City of Mitcham’s integration of stormwater works and green open space into the redevelopment of the Mitcham Library earned ASPECT another accolade. Here, the “rewilding” of the previously concrete-and-stone-lined creek enhances ecological values and encourages its use as an informal nature-based play space. 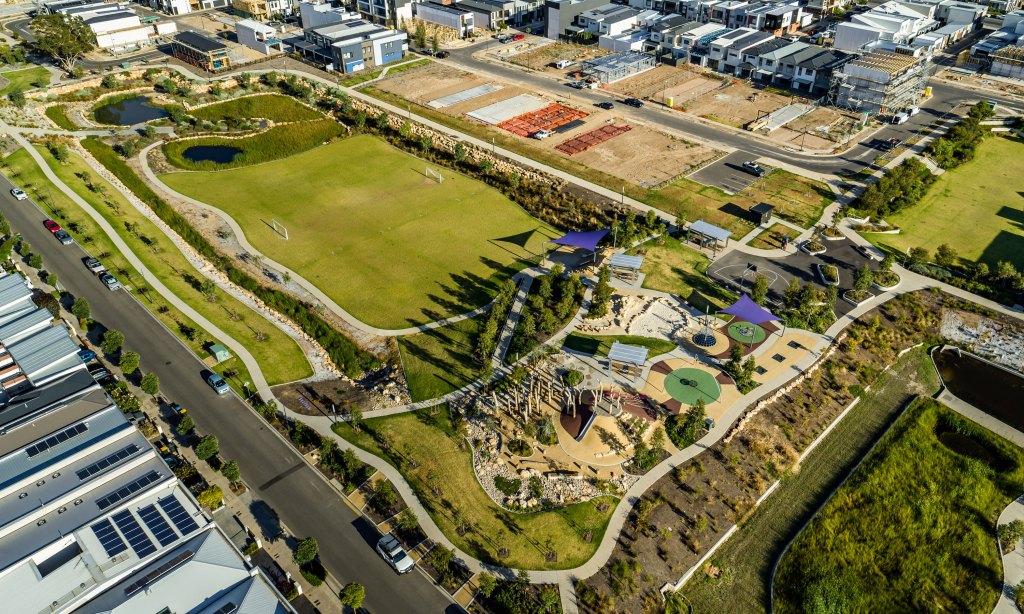 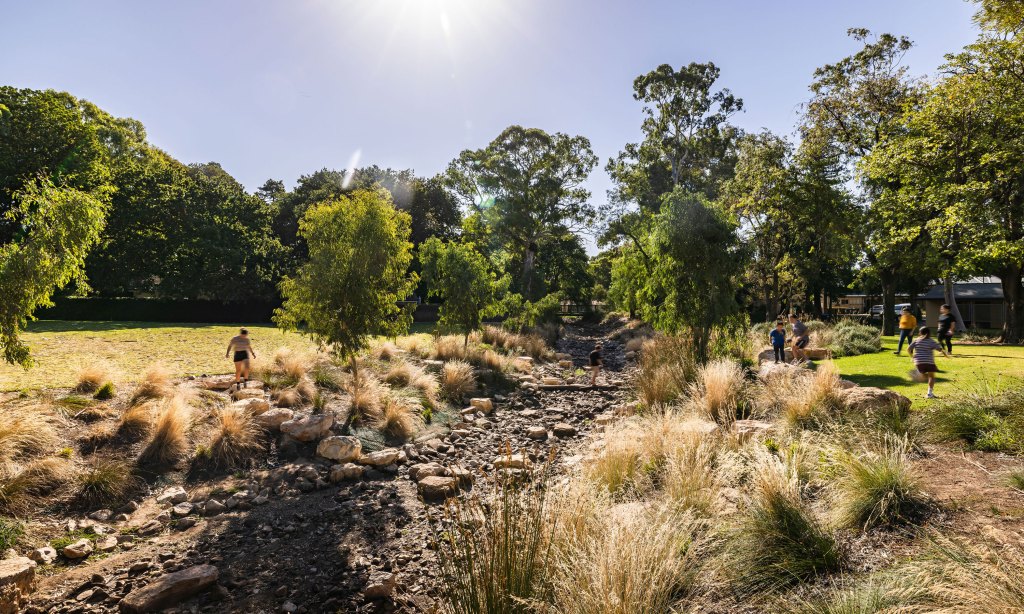 The City of Marion’s Open Space team has been responsible for a wide range of rewilding and regreening initiatives over the past decade, and now the Oaklands Wetland is home to a diversity of wildlife including birds, aquatic life and protected species such as the grey-headed flying fox and the purple-spotted gudgeon.

The wetland also provides a clean water supply to more than 30 local reserves, including the nearby George Street Reserve. A recent upgrade of this play space, located in the Marion Historic Village, references a century of brickmaking from the 1840s through to the 1940s. Elements such as the sandpit and water play area reference the use of the site as a “pug” (a place for mixing clay) and the drawing of water from Sturt River for brick-making. 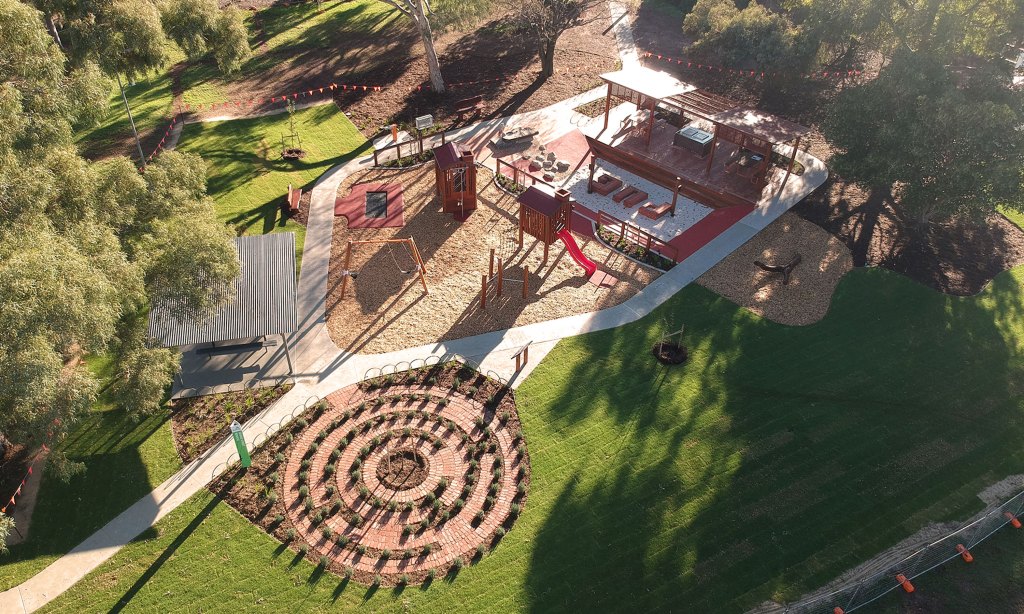 The historic railway station is now framed by an inviting new public space, which welcomes visitors from the Cockle Train and accommodates a program of events. Thoughtful detailing, material selection, interpretive elements and plantings reflect the site’s historic context. 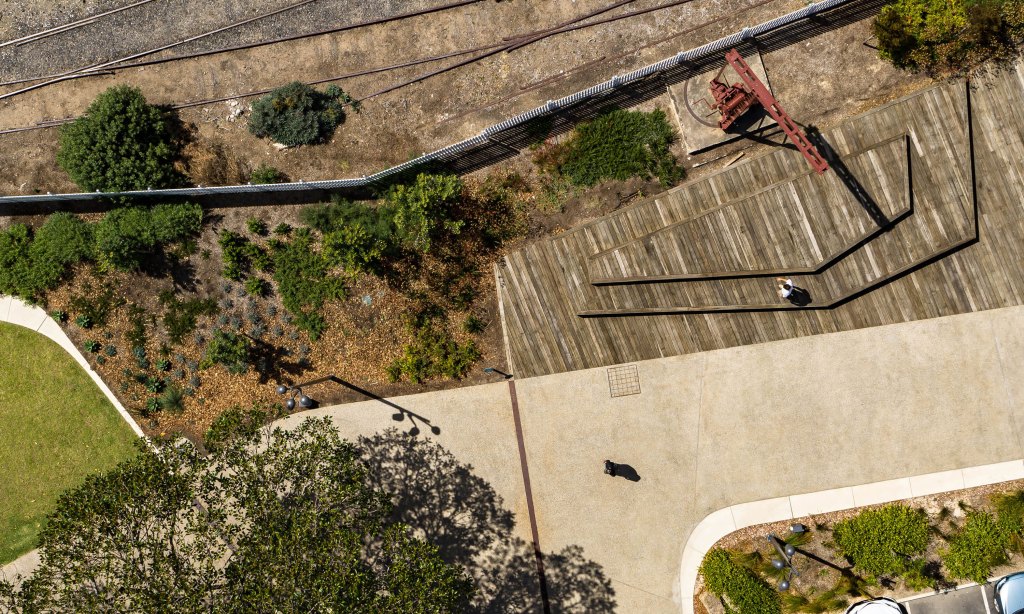 Each year, AILA’s Future Leaders category recognises up-and-coming landscape architects, and this year Outerspace Landscape Architects’ Wenxuan Zhang was in that group. Her recent winning design for the “Unpaving Paradise” Bonython Park/ Tulya Wardli re-greening pilot project highlights an all-too-rare initiative by the Adelaide Park Lands Association to restore and reinstate public parkland that has been lost to car parking.

In the spirit of recognition and reconciliation, the design is loosely inspired by waadla-warnka-ti, the annual migration of Kaurna people to the plains, where they constructed wardli to house themselves over the winter months. 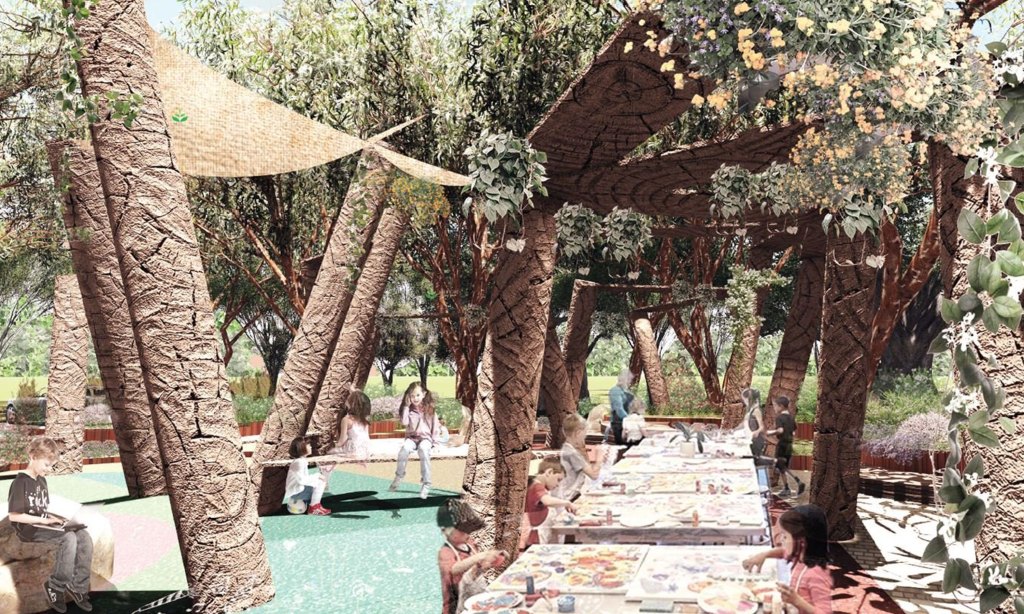