In the coastal category, Tridente Boyce’s “Henley Residence” is a standout with its daring, brooding form sited on a steep, elevated sandhill.  Three distinct living zones respond to the prevailing topography while an elegant cantilever staircase provides the salient internal feature. 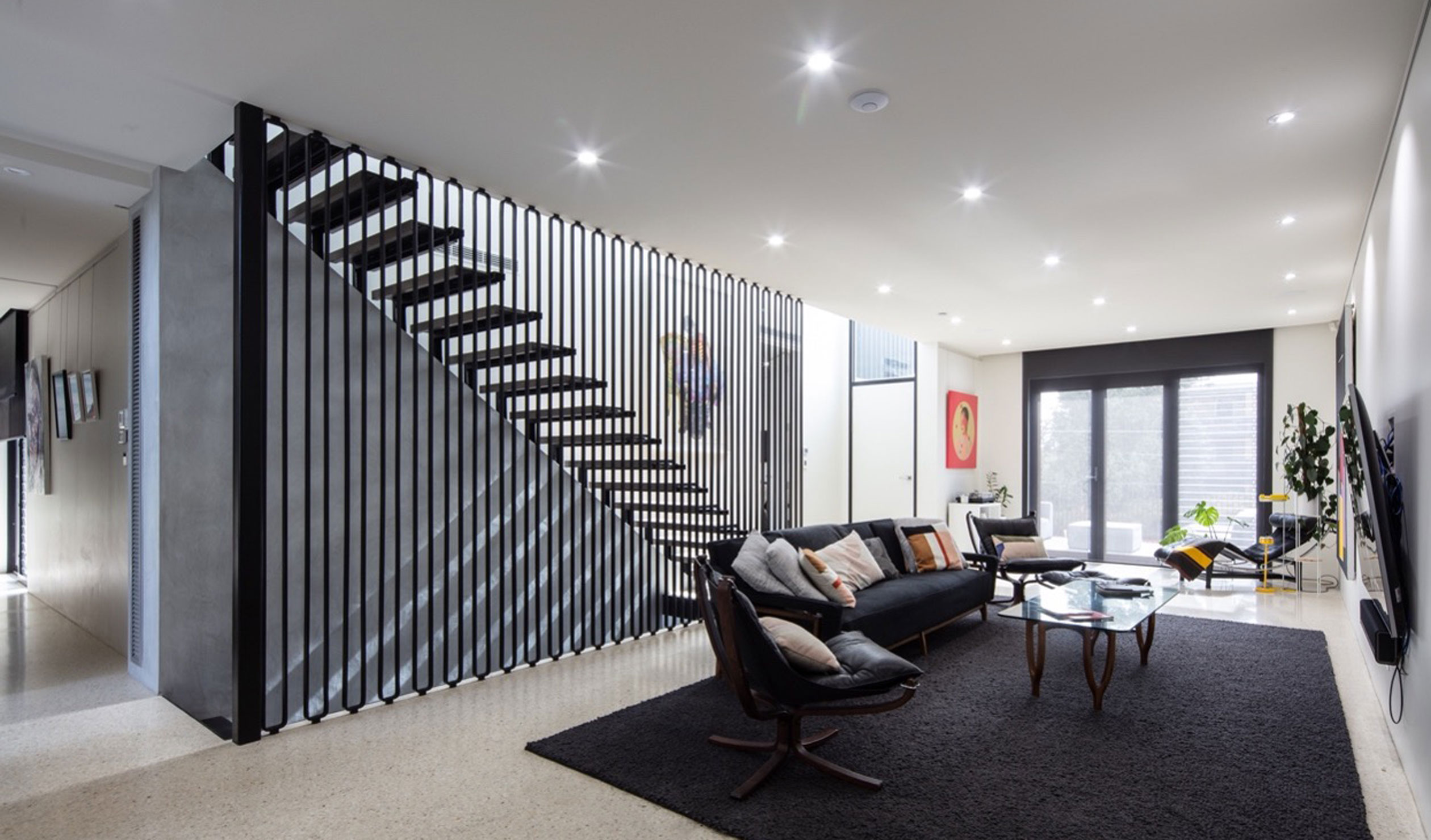 Situated on the busy foreshore strip between Brighton and Hove, Black Rabbit’s “number 106a” is very much in the public eye, its multiple monochrome aspects saying: “Look at me… I’m a little bit different!”

Decked with neutral tones and textures, the light, airy interior creates an easy transition between living, socialising and personal spaces to support an inspiring work-from-home lifestyle. 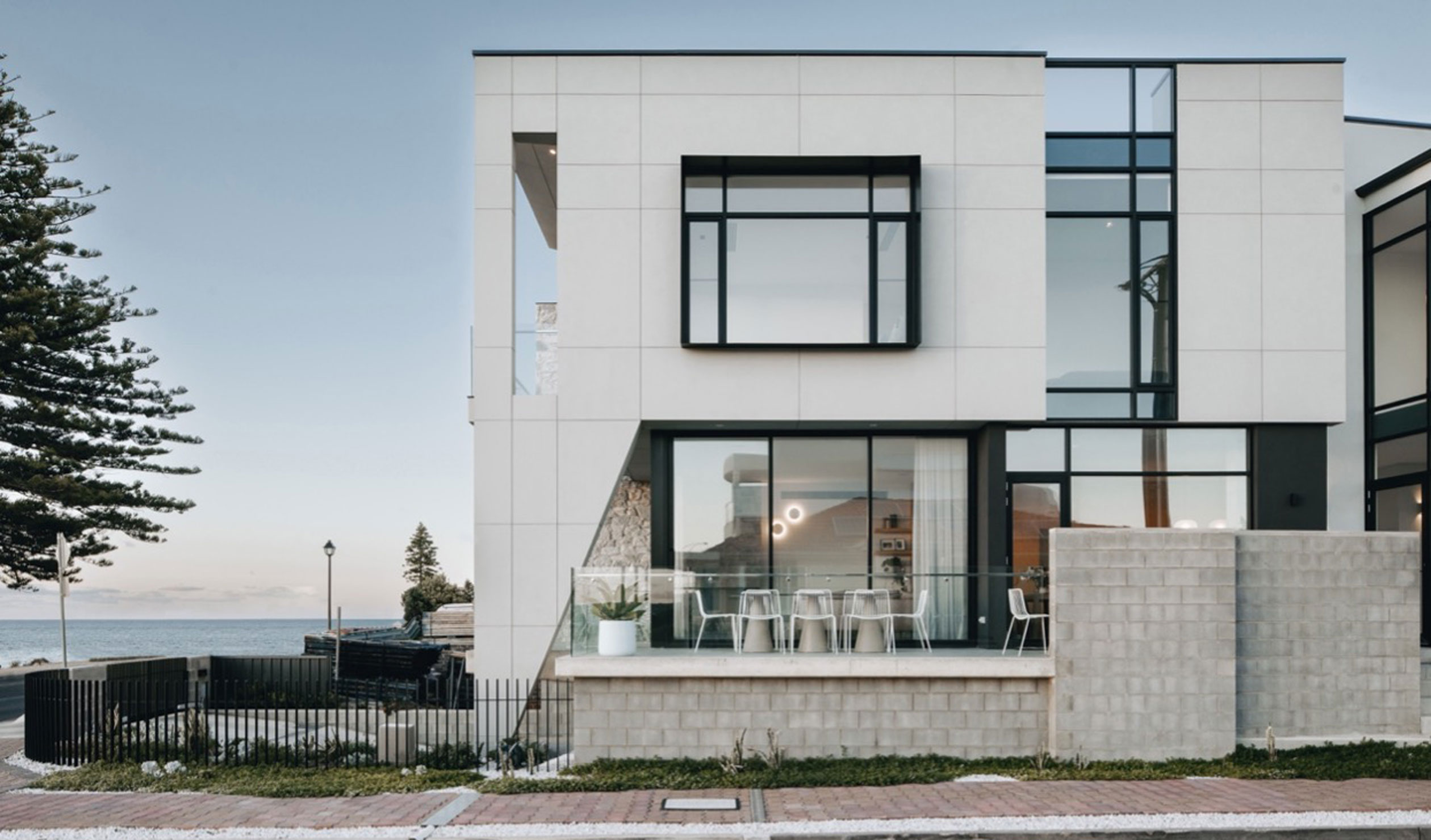 ‘Number 106a’, by Black Rabbit, at Hove. Photo: Christopher Morrison

Further south along the coast, BB Architects’ “Aldinga Beach House” is designed to function as a holiday house for multiple generations for the time being, and to become a main place of residence in the longer term.

In a generous design on this large esplanade block, the main living and entertainment areas take in expansive ocean views, while self-contained guest quarters embrace the hills aspect to the east. A swimming pool and spa are nestled into the north side of the house, avoiding the prevailing winds and capturing the winter sun. 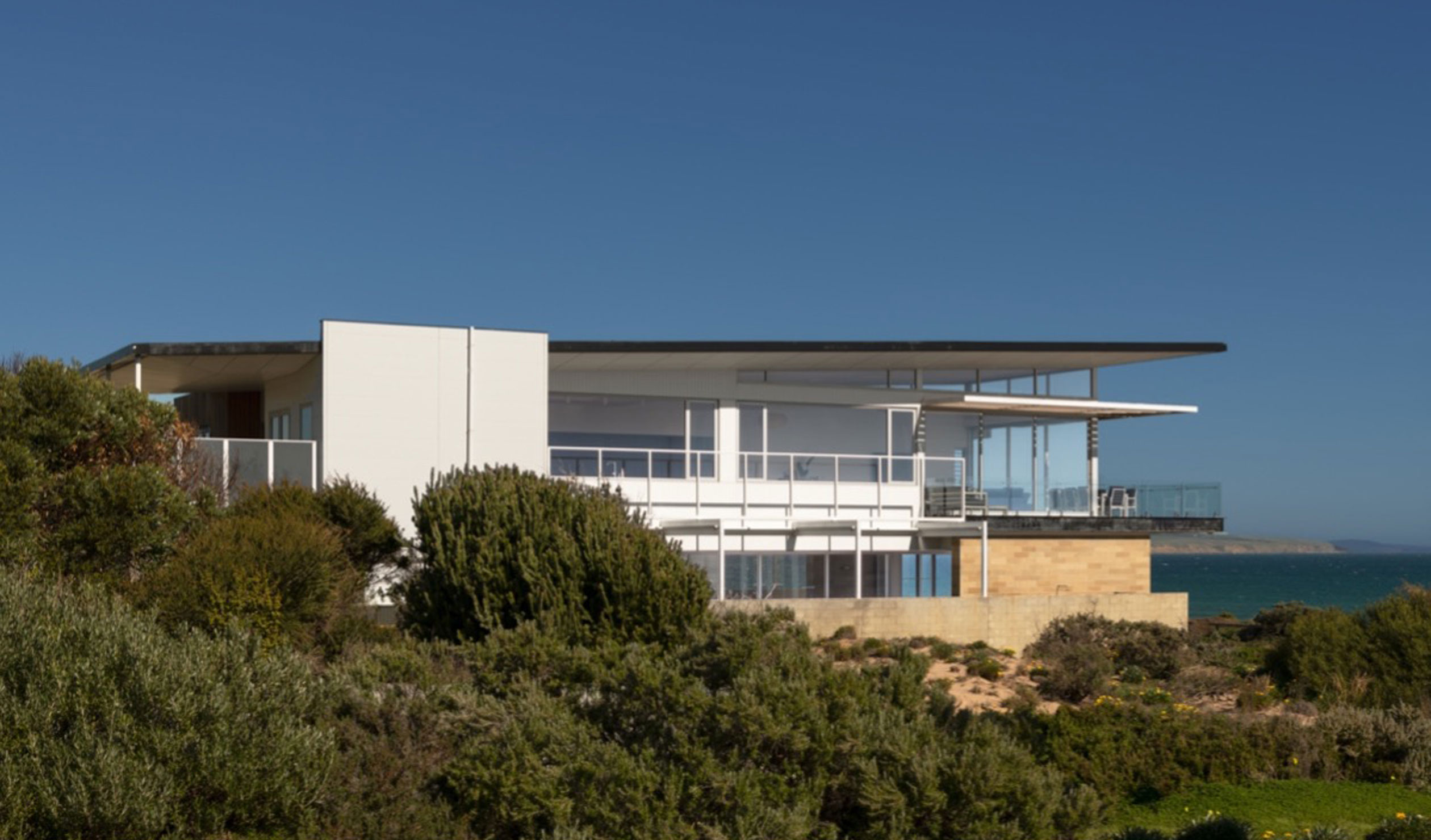 Even more grandiose is another “forever home” with scope to accommodate present and future generations at Balhannah. Evoking a luxury tourism resort, Atelier Bond’s aptly named “Big House on the Hill” extends for 65 metres through three distinct pavilions boasting uninterrupted Adelaide Hills views from every room.

The roofline of the “Big House” is increasingly pitched, folding upwards to capture the full morning sun, while a carefully considered textural mix softens the interior, forming intimate experiences on a grand scale. 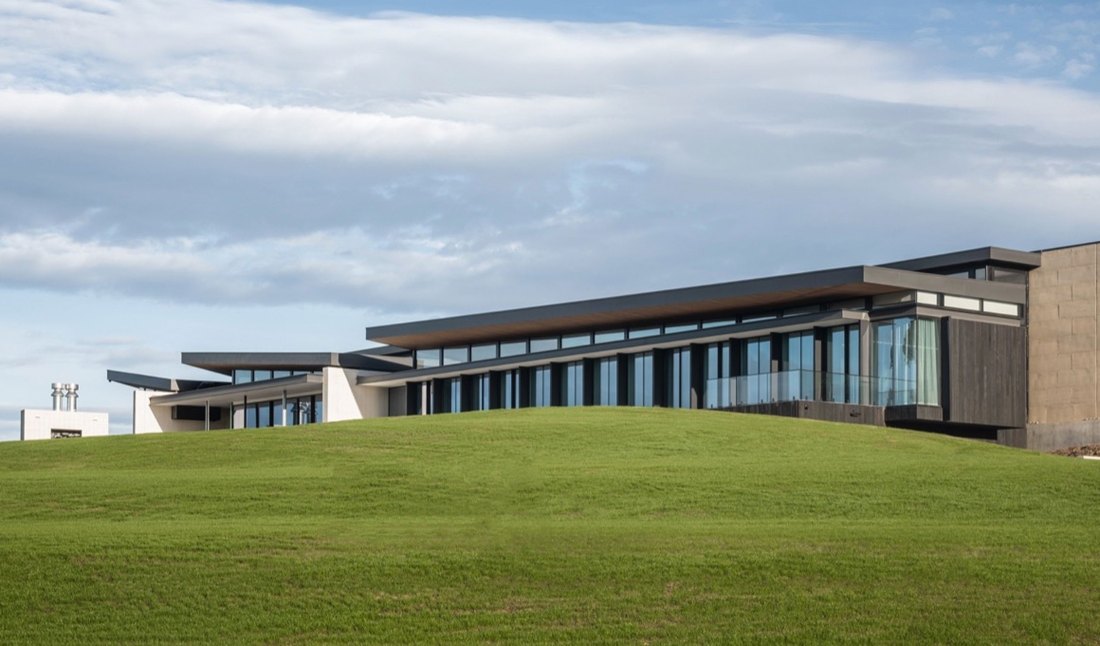 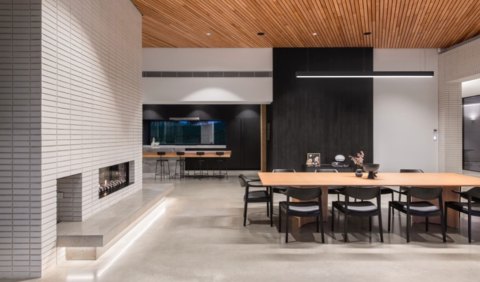 Inside the ‘Big House on the Hill’. Photo: David Sievers

Moving into the milieu of the heritage streetscape are a number of contemporary architectural insertions that respond to their surroundings in distinctive ways.

At the understated end of the spectrum is Max Pritchard Gunner’s “Brook Bridge” in Willunga, which disappears behind a cluster of silver birch trees in deference to its heritage-listed elderly neighbour. Behind the hidden façade, a delightfully simple linear house with expansive roof overhang spans the creek and garden.

Winter light and double glazing on the northern aspect keep the occupants warm, while the overhang provides summer protection, in a quintessentially joyful Pritchard Gunner design.

Back in the city, imaginative approaches by Das Studio, Con Bastiras and Ashley Halliday Architects echo the rhythm, forms and detailing of their respective character neighbourhoods while producing solutions that are uncompromisingly contemporary.

Das Studio’s “Iron Chef” house at Millswood uses a double-height void to create a generous connection between levels – framing a view to the red gums behind – while Bastiras discretely tucks a second storey under the hipped roof line of his “Norwood House”. 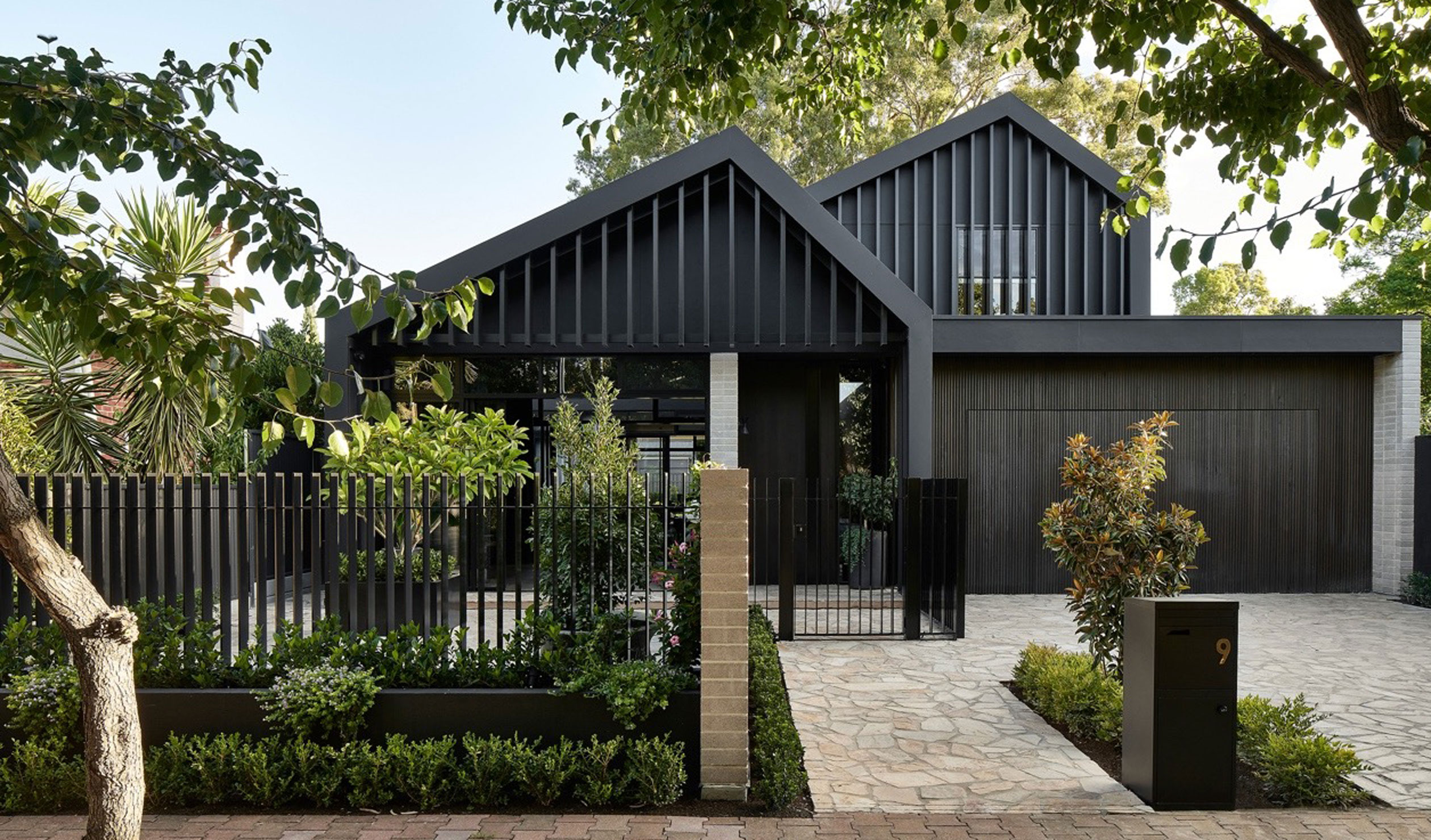 A second entry from Black Rabbit (“number 14”) confidently asserts itself among the traditional housing typology of a leafy Adelaide suburb, nodding its head to the original bungalow it replaced. Monochromatic juxtapositions of texture and form stand watch over the street, beckoning visitors to enter the warm and inviting interior. 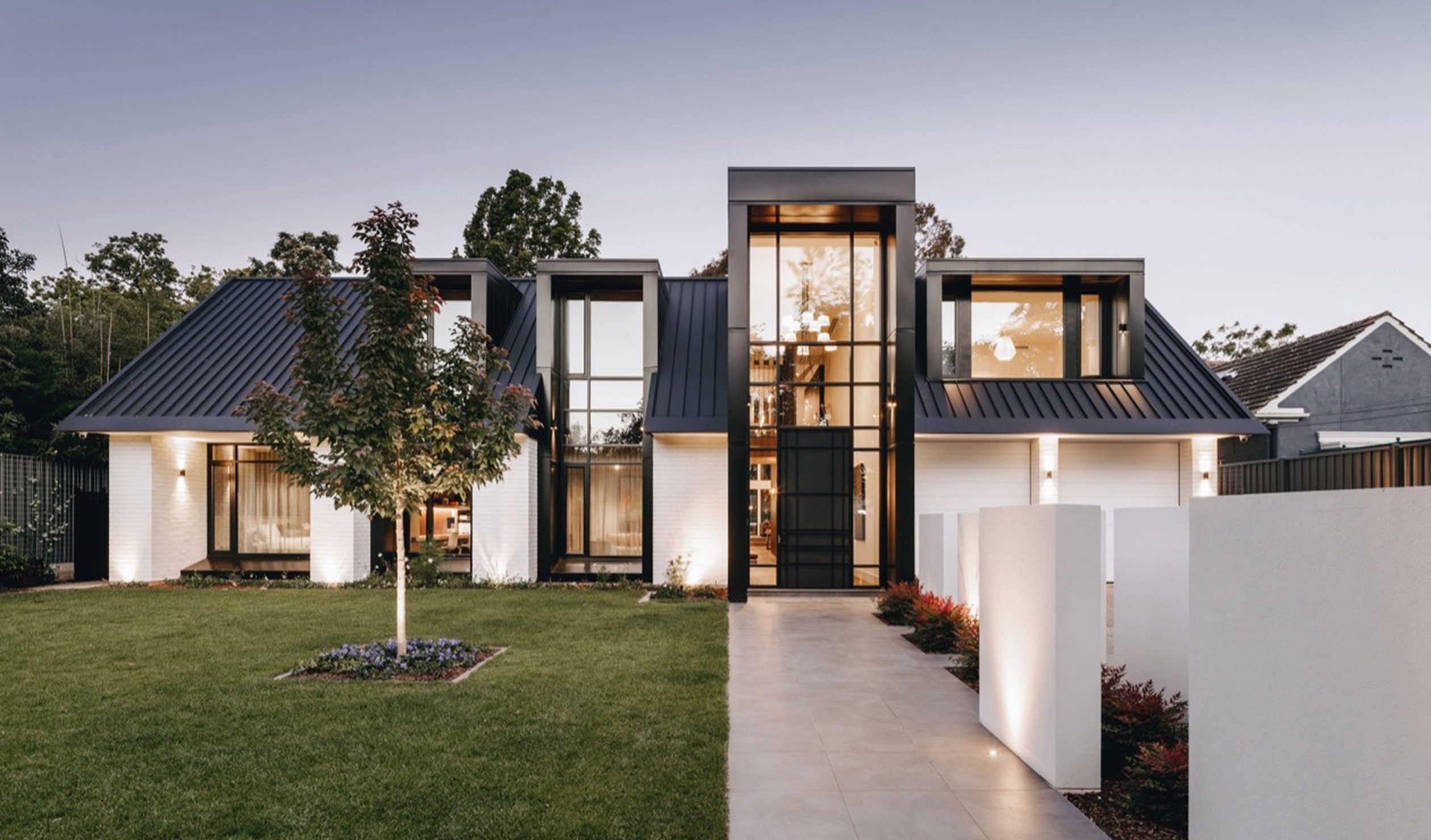 In another nearby leafy suburb, “Jacaranda House” by Architects Ink is made up of a series of modernist masonry volumes that radiate around an existing jacaranda tree. The variation in floor levels and ceiling heights, along with carefully considered courtyards, voids, openings and skylights, create a daily dance of light to showcase the textural and tonal architecture and enrich the spatial experience. 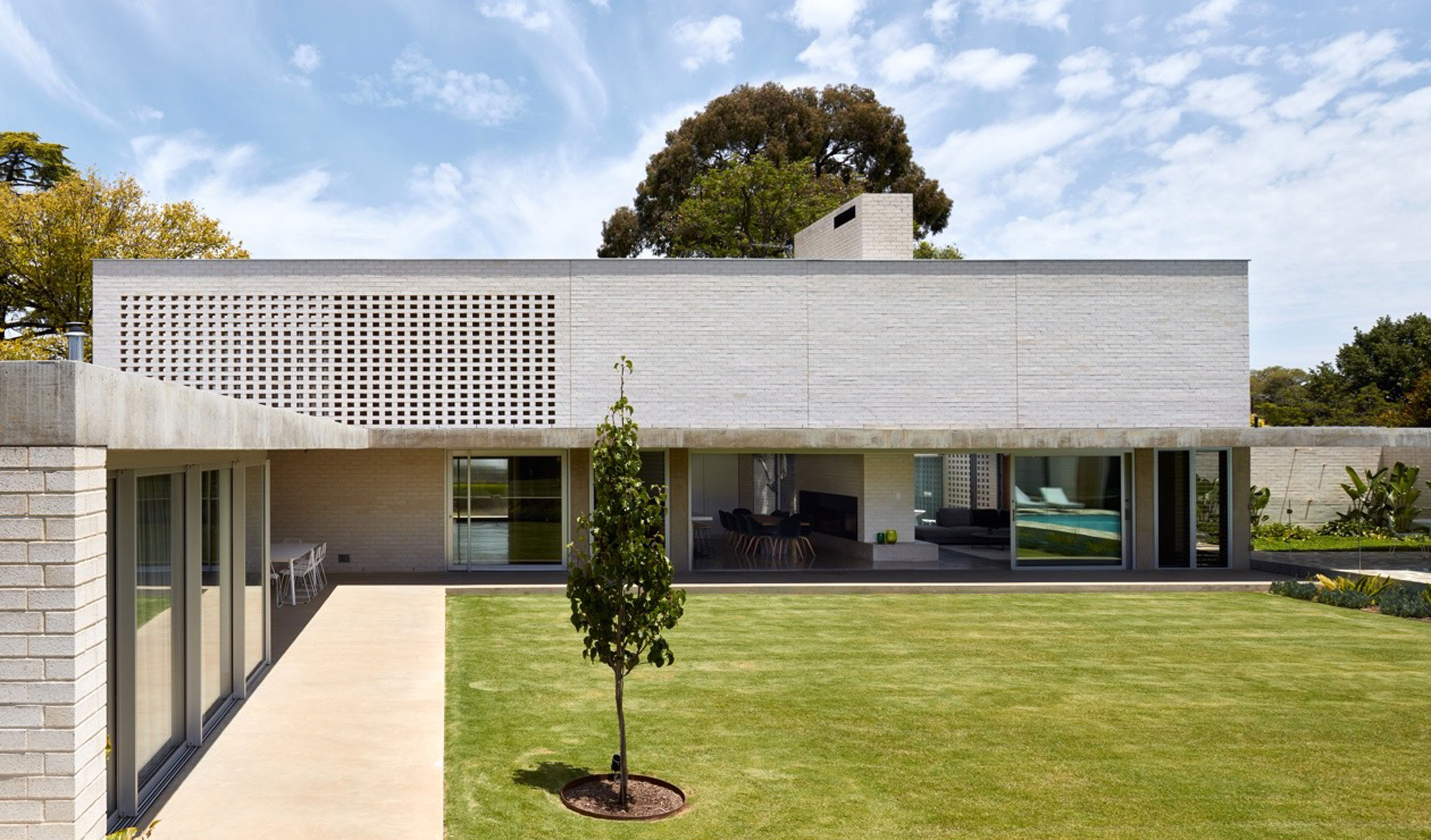 The theme of insertion continues into the apartment housing category. In a hitherto neglected location between Victoria Square and Hurtle Square, Penny Place Apartments follows sister development Kodo Apartments to deliver a new inner-city residential precinct that integrates with the existing neighbourhood and squares through pedestrian and cyclist paths and sensitive podium setbacks. 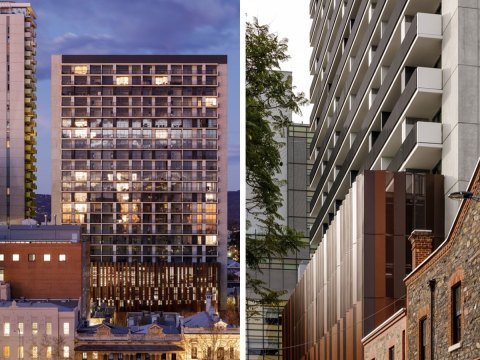 PACT architects’ residential tower at Brougham Place sits respectfully behind the reactivated state heritage-listed house and stables, its use of zinc and stone referencing the heritage context, while JPE’s One On The Park restores and retains state-heritage-listed St Margaret’s House in a higher-density, mixed-use community. The residential building’s alternating angular walls act as apertures for views of the Parklands and Adelaide hills, creating a dynamic exterior facade of light and shade.

A smaller-scale office building and group of townhouses take their cues from the heritage building, while consistency of materiality and the grouping of elements establish a single identity across the site. 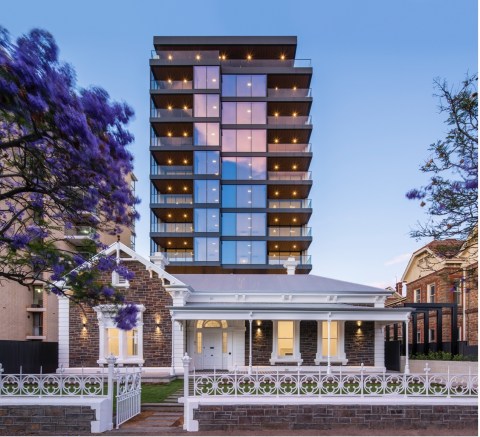 ‘The Brougham’, by PACT Architects. 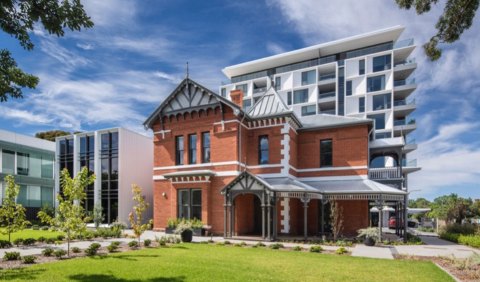 Finally, on a hill at Angaston, sits a contextual insertion of a different kind. Here, three houses organised around a central linear axis incorporate universal access between different levels to accommodate four generations. The resultant series of pavilions respect traditional roof forms and maximise northern exposure, cross-ventilation, and views to the township and hills landscape beyond. 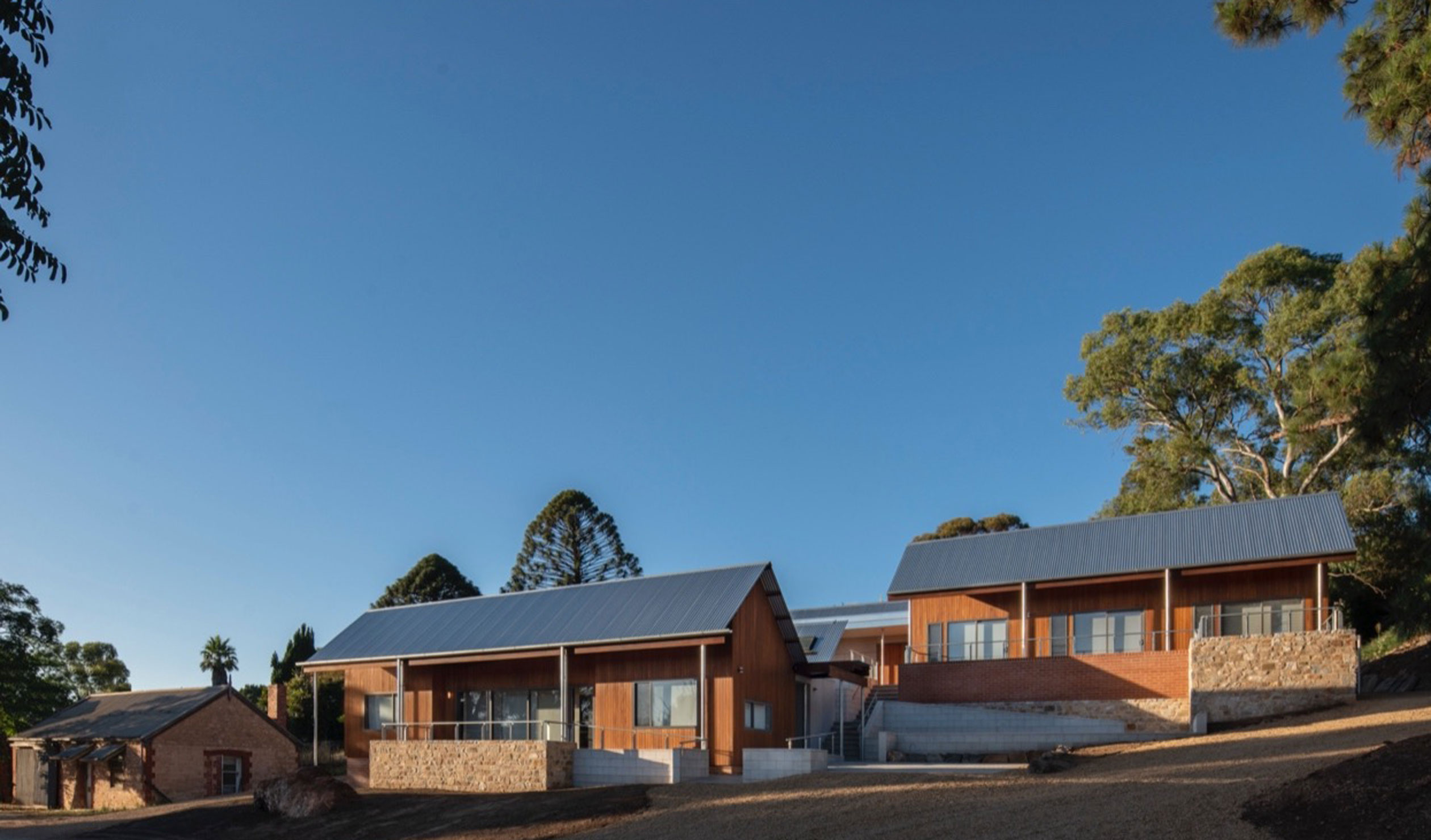 Most of the winners in the 2022 SA Architecture Awards will be revealed on June 16, with the architecture medal (overall winner) to be announced at a live event on June 28.