A great sheet made of crinkled silver space blankets hangs front of stage like a proscenium curtain, texturing the yellow-green stage lights that move across it and blocking the view of the stage behind. The performance begins with the amplified sound of a sigh, then another, until there is only the sound of life, of slow breathing, and then snap to downlight: six dancers, exposed, stand in pools of light on a dark stage through the now-translucent silvery screen.

A fragile scrape of strings takes over the melancholic mood and the dancers, semi-clothed and vulnerable in half-shadow and wearing seemingly colourless undergarments, gaze upwards into the light, vulnerable. They begin to clothe themselves and, vulnerability protected, they start stretching upwards towards the light.

There are only dancers on a stark stage in neutral colours, a simple melody on strings, a silvery space sheet, yet the simple lift and tilt of the silver curtain to low horizontal creates an ethereal change; blue-white crosslights bounce off the smoky haze and sculpt each of the dancers now rolling prone across the floor, trapped between the ground and the silvery sky as if at the mercy of the tides. 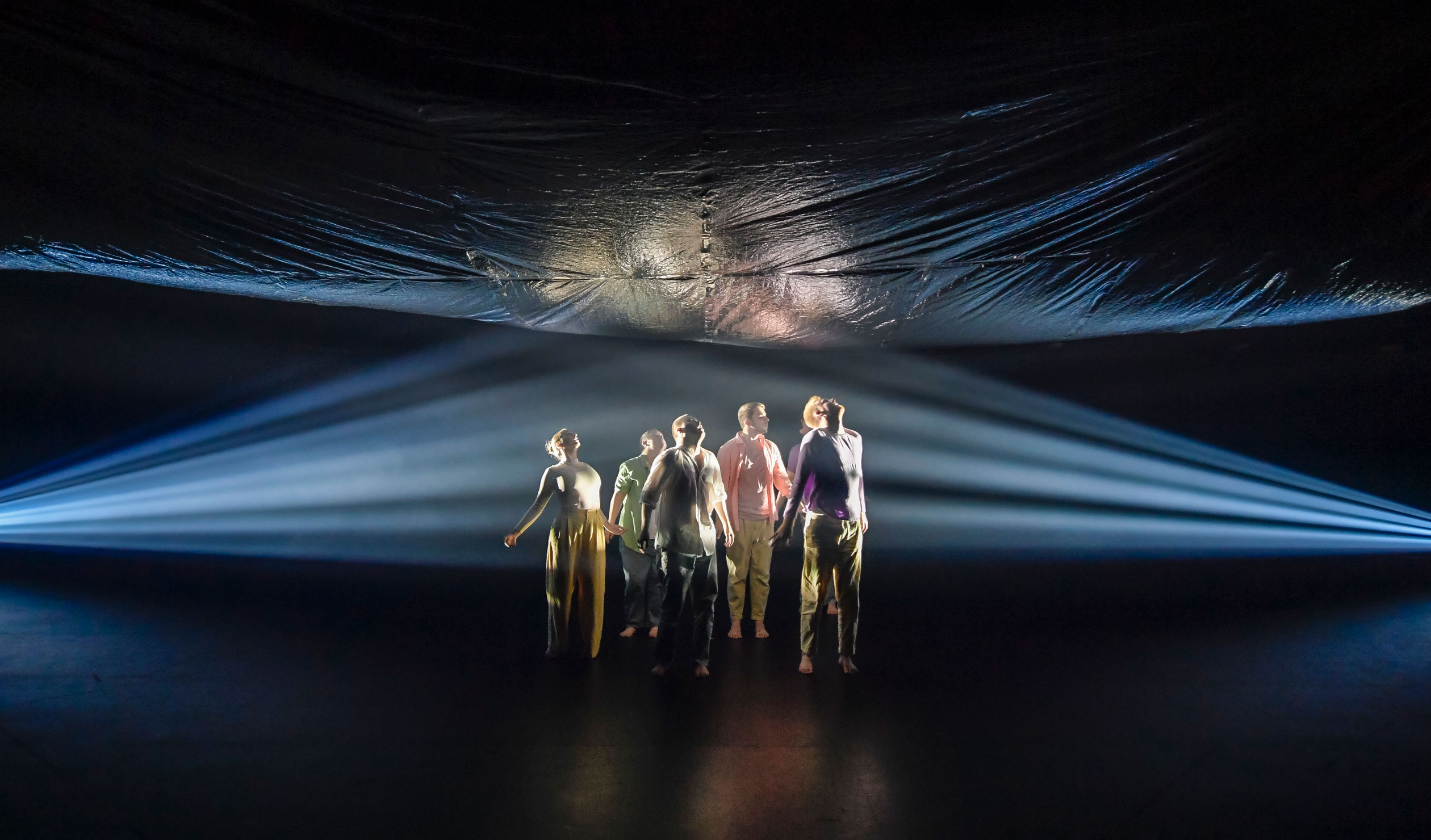 Isolated and fearful at first, each dancer expresses their internal journey from fear and distrust to the courage needed to be vulnerable and open to interaction with one another; the mood transforms from trepidation, sometimes even despair, to warmth and connection. The soundscape mirrors this with an increase in tempo; a faster staccato beat of bow on string provides a percussive rhythm to a more joyful tune. The lights glow from cold blue to rich pinks and reds, and there’s a moment of extraordinary beauty when the silver screen is flipped to reveal the golden glow on its other side, and the dancers’ previously neutral-coloured costumes miraculously acquire soft shades of pastel pinks, blues and yellows through a change in lighting.

There are heart-stoppingly tender duets from the luminous Charlie Wilkins and Madalene Macera, solo expressions of emotional authenticity by Darcy Carpenter, Bhodi Hudson, Alexis Luke and Michael Noble – all a joy to watch as they slowly join together into a caring community in which each dancer finds their safe space.

There would have been seven, and before that, there would have been eight; there is an announcement just before the performance that Michael Hodyl has had to withdraw at the last minute due to injury – a disappointment he would have shared with fellow Exposed company dancer Jianna Georgiou, who had been similarly indisposed.

Director Michelle Ryan and assistant director Larissa McGowan had just one hour to rehearse an adapted choreography with the dancers before the performance began, but any changes made were undetectable. A joy to watch, the performance is a perfect synchronisation of the dancers’ movements with a simple and effective stage setting and strings-only soundscape.

Exposed serves to emphasise profound emotional truths; that those whose disabilities make it challenging to find safe spaces in public places can sometimes find that safe space within, fortified with courage and strengthened through compassion, understanding and connection with others.

Restless Dance Theatre’s Exposed is being presented at the Adelaide Festival Centre’s Space Theatre until April 9.