Long-time collaborators and Progress Report co-directors Alison Currie and Alisdair Macindoe had their original “lightbulb moment” about polystyrene while working together in a studio many years ago. A sheet of the plastic was being blown about by a fan and they realised it could be an interesting material to play with choreographically.

The idea was shelved for a time, but then explored by the pair at Vitalstatistix’s Adhocracy national arts hothouse in 2017, before being commissioned through Vitals’ Incubator program in 2019. Now, Progress Report is having its premiere on stage at Waterside in Port Adelaide and promises to be a powerful reminder of the need to reconsider the value of garbage.

Macindoe, a Melbourne-based dancer, sound designer and choreographer, says the way in which the polystyrene “just happened to be there” in the studio with the artists years ago is a kind of microcosm for how it is in society.

“It’s such an integral part of everyone’s life, especially living in an urban environment, that it’s kind of seeped into our work in the same way it’s just seeped into everyone’s lives. We take it for granted, so we’ve used this as an opportunity to review that situation and meditate a bit on it creatively.”

Adelaide-based choreographer and performer Currie ­says Progress Report also uses other plastics, including large rubbish bags. Most of the polystyrene/Styrofoam was intercepted midway through the recycling process at Adelaide company Coolfoam (and will ultimately be recycled by it), with some of the soft plastics also coming from members of the public and community groups.

Currie says while the ideas behind the work started with the material of polystyrene, “they’ve grown to be quite all-consuming, about consumerism and waste and climate change and our current situation, and also future imagined scenarios”.

Progress Report is a solo show, performed on alternate nights by Macindoe and local dancer Cazna Brass. Designer Meg Wilson has created upcycled plastic costumes for them by ironing soft plastic waste together to create fabric.

Mirroring the change that occurs through the recycling process, the performers, objects and choreography are in a state of flux. To begin with, says Macindoe, the performance is like a choreographic study into the “physiological properties” of the polystyrene – “how it acts under air, how light it is, how it falls when you drop it, what it’s like to move it along your body or bend and twist it”.

As the show progresses, the plastic objects come to represent different things, from sacred objects to symbols, architectural forms and even people, with the performer seeming at times to be talking to the polystyrene and vice versa. The interactions convey emotions such as tenderness, isolation and loneliness.

“We are able to reuse the objects on stage in many ways so it’s a way to explore and represent the very complex and intertwined relationship we have with consumerism and objects and the way in which this relationship bites deep in our psychology,” Macindoe says.

“The objects we own really connect to an interior world both personally and on a large scale in human history… we’re sort of using polystyrene as one object to do many, many things to talk about society’s relationship with trash.”

Fans are an integral part of the performance. In one instance, they are used to animate the polystyrene suspended onto the dancer’s body, while in another they create a vortex of wind on stage to create a beautiful moment in which a large black plastic sheet does a dance solo.

Macindoe has worked with SA-based sound designer Sascha Budimski to create the soundscape for the work. It features text spoken by the performer and recorded sounds, including some made using polystyrene instruments that the pair created.

“There is a live [percussion] instrument on stage made entirely with polystyrene, played by the performer, and we’ve been calling it the Styrophone,” Macindoe  says, explaining that, when struck, it makes a kind of pitched, muted gong sound. 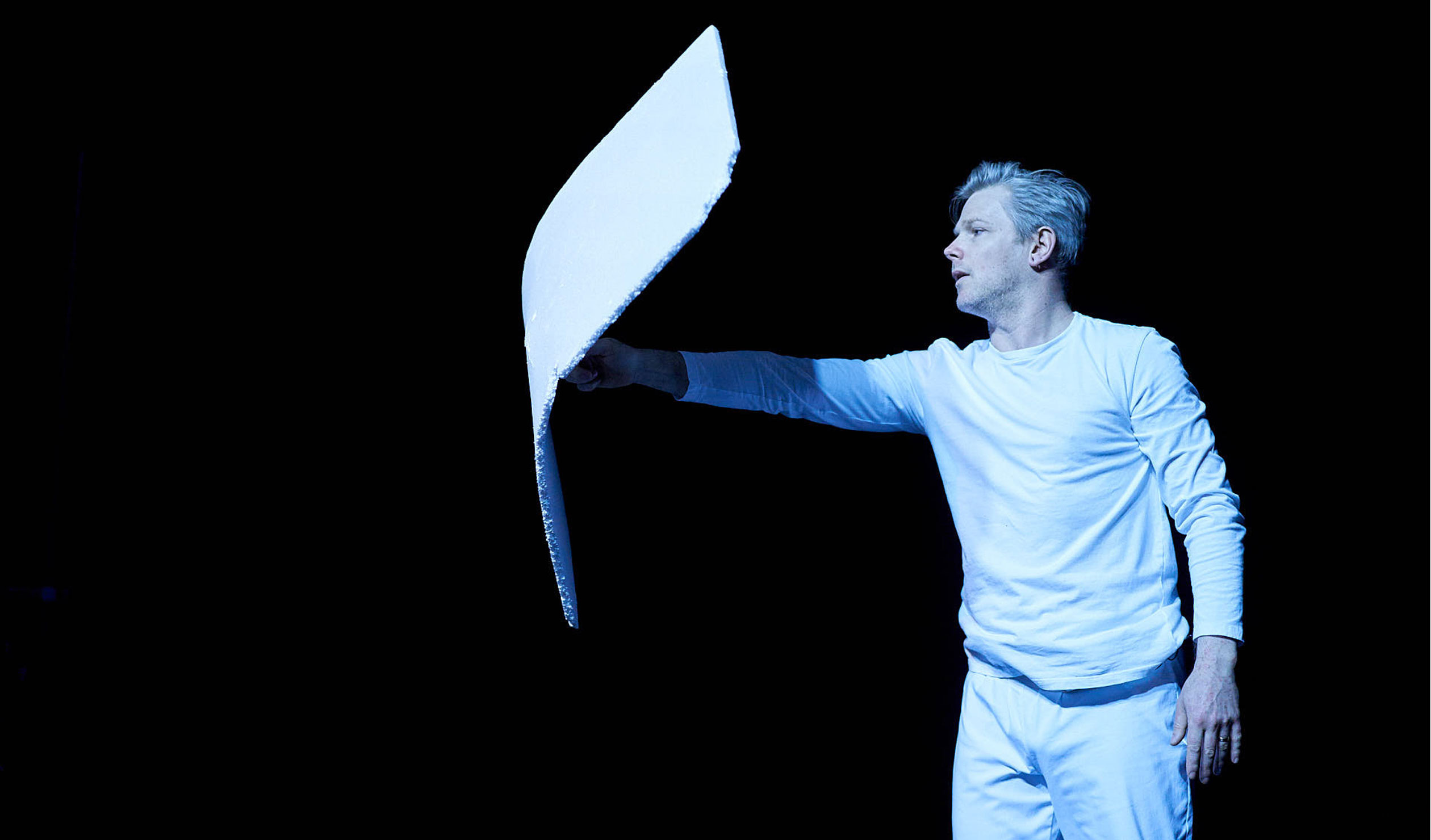 The interactions between performer and objects convey a range of emotions.  Photo: Sam Roberts

The last time Macindoe and Currie collaborated was when he created the electronic sound score for her work Concrete Impermanence, in which the dancers performed with pleated cardboard in an exploration of grief and trauma. Last year, Currie repurposed giant goon sacks for Of All Things, presented by Australian Dance Theatre.

“I have been working with objects quite a lot for a number of years,” she says.

“There’s something about how it can change the relationship with the human on stage… [in Progress Report] the Styrofoam can be many different things throughout. I enjoy that process and finding how the performer or performers are part of that picture and when the objects are more dominant in the space and when the performer has more of the limelight.”

The result, in this instance, promises to be at times funny, thought-provoking and moving.

Asked what they hope audiences might take away from Progress Report, Macindoe says it feels like the work is “almost an expression of the mental state you might find yourself in when confronting the reality of climate change”.

“I hope people will leave the work feeling that there’s a sort of unifying sense about that future and that we’re not alone when we are confronting the terrible challenge of moving forward given the existence of man-made climate change.”

Progress Report will be presented by Insite Arts and Vitalstatistix at Waterside in Port Adelaide from August 17-22. The performance on Sunday (August 22) will be audio-described and sign-interpreted, with a sensory tour also available at 6pm. Details here.