In our tumultuous society, notions of what it means to “be a man” are being righty questioned, leaving many young men grappling with issues of identity and masculinity.

Confronting these issues head-on are five young male dancers ­– Lorcan Hopper, Joshua Campton, Kayah Guenther, Max McAuley and Zakaria Ghomri – with a new disability-led dance-theatre production called OF BOYS AND MEN (the men of shadows) that draws on their own experiences.

The five men, who all have Down Syndrome and affectionately dub themselves The Brotherhood, met in Sydney in 2015 during an Accessible Arts residency program open to emerging artists who have disabilities.

“We did some dance workshops with lots of mentors who showed us the way to express ourselves and showed us what to improve on,” says Campton who, like Hopper, is based in South Australia.

“We built friendships; we had to stay close and in contact. Once we did that, we started collaborating for the show.”

The performers partnered with SA director Paul Gazzola in 2018 to create OF BOYS AND MEN (the men of shadows), which explores themes of manhood and identity through the lens of male dancers with disabilities. Now in its third stage of development, the production has come to Adelaide for two shows, which will be performed at the Goodwood Theatre and Studios this weekend.

“The performance is based on five men, three from NSW and two from SA,” Campton says. “We’ve collaborated with our director, Paul, and we’ve worked on some themes of what it’s like to be a man.

“We want to challenge what people think men do. We want to show them that it’s normal for men to dance and that it doesn’t make us any less of a man if our passion is dancing.” 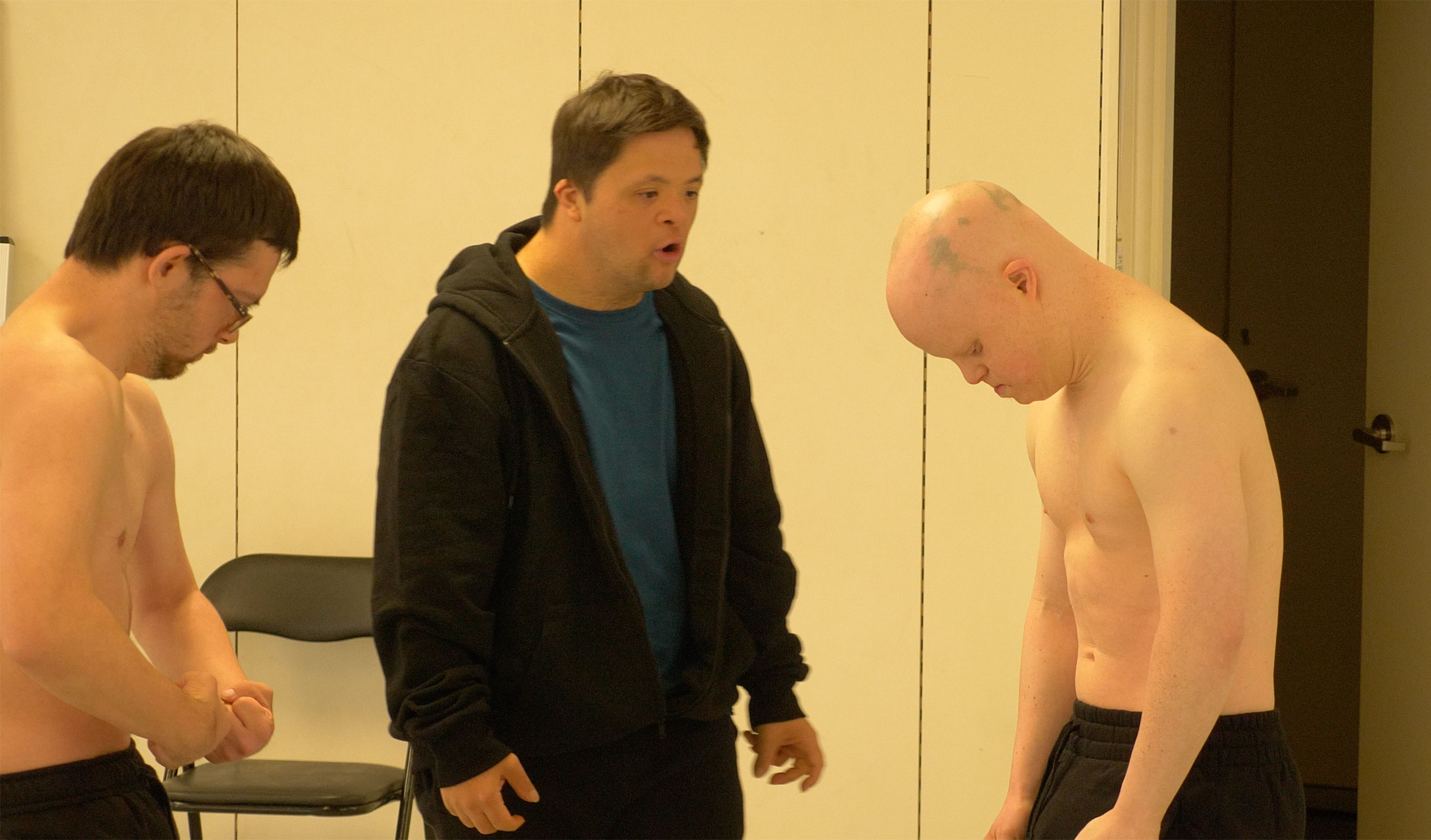 Gazzola describes the dancing as a mixture of set choreography and improvisation, supported by “defined texts” that the dancers read out alongside their dance routines.

The performers have complete artistic control over the content of the production, from developing their own choreography to choosing the music. Gazzola ­– an experienced artist and curator who is currently artistic director of Adelaide-based OSCA (Open Space Contemporary Arts) ­– plays a guiding and supporting role, with the creative team also including SA designer Gaelle Mellis and composer and producer DJ TR!P.

“I know full well that it’s not really my show, it’s for the five of them, so I’ve become kind of this intermediary, and they’ll tell me if they don’t want to do something and that’s really cool,” Gazzola says.

“All the musical choices are their own – they’re using them as drivers for all the emotions they want to convey and represent, like difference, empowerment, friendship, individuality, yet simultaneously togetherness, too.”

Those musical choices are mainly pop songs, including Will Smith’s “Men in Black”, Queen’s “We are the Champions”, Sam Smith’s “I’m Not the Only One”, and David Bowie’s “Boys Keep Swinging”. DJ TR!P has created new compositions that are also incorporated in the score, and has collaborated with the dancers on a beatboxing section.

For Campton, the strong friendship and shared connection between the dancers is the catalyst for their joint decisions on the direction of the show.

“There are differences, but we all have similar tastes, and that’s absolutely important. We bond very well together and have built a friendship around the show.”

Breaking into the performing arts industry can be especially difficult for artists with a disability, and the bond that has developed between these five is grounded partly in this common experience. Their enthusiasm and dedication to their craft is unwavering.

“Men like us find it fundamentally hard to get into the dance industry… and we do like dance, it’s our passion,” Campton says.

The title of the show reflects the barriers they face.

“The title came about in that time of the five of them deciding to explore these themes of masculinity and how they see themselves within society, and the men of shadows part came about during a rehearsal,” Gazzola explains. “I think that’s their little take on how they feel about themselves, kind of being pushed to the side a little bit, not heard a bit, that they sort of feel they’re in the dark. I find it really apt in a way.”

While the performance is presented as being “disability-led”, Gazzola says the fact the men have Down Syndrome hasn’t affected the way in which the production runs.

“There’s often this line that’s drawn about their [the dancers’] sensibility as guys with Down Syndrome and what that really means, but no one’s talking about the legacy or the impact of that; they’re treated like any artist. They’re just like anyone else in dance-theatre – they’re professional artists.”

Gazzola and the team hope the show will attract interest from industry representatives from across the country so that it can tour nationally.

“The intention is always to try and get this out there into the world – it would be great to get another opportunity to perform somewhere.”

OF BOYS AND MEN (the men of shadows) will have its final work-in-progress showing at 2pm tomorrow (Friday) and Saturday at the Goodwood Theatre and Studios.