It was Victorian Opera, then under the artistic direction of Richard Gill, that first brought Kathy Lette’s racy novel How to Kill Your Husband to the stage in 2011. The satirical tale of sex, love, murder and marriage was adapted by Timothy Daly, with Australian composer Alan John creating the music and Daly and John co-writing the libretto.

In a Victorian Opera video that accompanied the Melbourne premiere, Daly says the playful element in Lette’s writing inspired him to turn it into “a type of sardonic witty cabaret where anything can happen”. John describes the resulting show as good adult fun – an “in-your-face kind of piece”, with scenes which are both racy and absurd.

On the eve of How to Kill Your Husband’s return to the stage during this month’s Adelaide Cabaret Festival, Lette herself tells InReview that the creative union of Daly and John was a match made in heaven.

“They wedded a pithy and witty libretto with a cerebral and cheeky score,” she says. “If opera is not to become a musty, fusty museum piece, then it’s imperative that modern stories are commissioned and staged.”

Dimity Shepherd, who was part of the original Victorian Opera cast for How to Kill Your Husband, will reprise her role as Jazz, with the State Opera cast also including Carla Lippis, Jessica Dean, Henry Choo, Kanen Breen, Rosie Hosking and Nicholas Cannon. 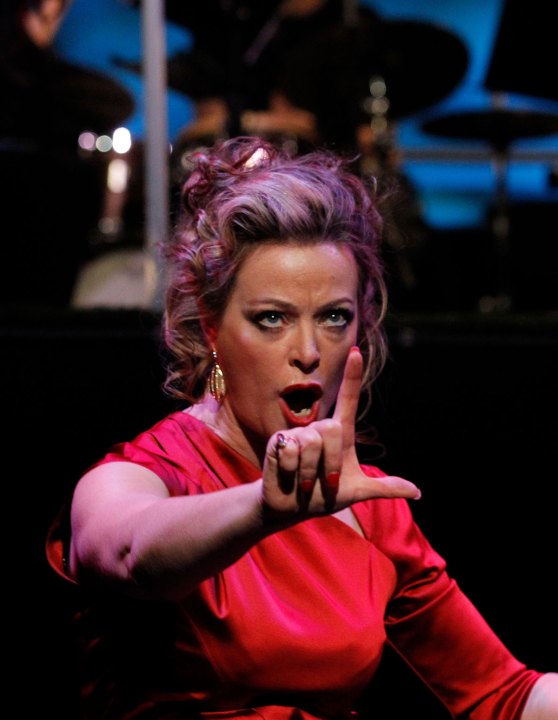 Dimity Shepherd, pictured here in the Victorian Opera premiere of How to Kill Your Husband, will reprise the role of Jazz in the new State Opera production. Photo: Jeff Busby

In this edited email interview with InReview (conducted while she was on holiday in Europe), Lette explains how she came to write How to Kill Your Husband (and other handy household hints), why she thinks it’s still just as relevant in the year 2022, and what audiences can expect from the stage show.

How to Kill Your Husband (and other handy household hints) seems a curious choice for adaptation by an opera company – how did the original Victorian Opera production come about?

Yes, operas are more usually taken from plays, but novels and short stories have also provided much inspiration. The most famous are Carmen, from a Merimee short novel, and Boheme,  adapted from the fictional sketches by Henri Murger (Scene de la Vie de Boheme).

My friend, the wonderful conductor Richard Gill, loved the big themes in How to Kill Your Husband – betrayal, revenge, murder. Many operas are set against a backdrop of war, and this one is no exception. In this case it’s the sex war.

He also enjoyed the black comedy of the tale – and the fact that the protagonists are female. A warning to all male audience members: You will be ovulating by the end of the show!

Why do you think it works as a cabaret opera?

The wonderful librettist has truncated the story and focused on the way married women feel exploited on the domestic front. Not only are women getting concussion hitting our heads on the glass ceiling – and cleaning it whilst we are up there – but we also face a second glass ceiling at home. Even though women make up 50 per cent of the workforce, we’re still doing about 99 per cent of all the housework and childcare. Men always say they’d like to help more around the house, only they can’t multi-task. This is a biological cop-out – no man would have any trouble multi-tasking at, say, an orgy.

Cabaret is the perfect venue for my mischievous material. The creative team have concocted an irreverent mix of Sondheim and Kurt Weill and Sweet Charity. And [Alan] John’s music is sublime.

For those who haven’t read it, how would you describe your novel in a nutshell?

When a Domestic Goddess is arrested on suspicion of the murder of her famous surgeon husband, her two best friends are aghast. Life should begin at 40 – not life imprisonment for killing your spouse. Best friends Cassie and Hannah immediately set about proving their friend’s innocence… uncovering quite a few surprises, twists, betrayals, infidelities, facelifts and toy boys on route.

How to Kill Your Husband (and other handy household hints) is a story about embarrassing things happening to desperate women. It’s a moral tale about women not Having It All, but Doing It All.

It’s also about the fact that love prepares you for marriage the way needlepoint prepares you for round-the-world solo yachting. Our Domestic Goddess thought she had the perfect marriage, until she discovered her husband’s sexual kleptomania.

I was so embarrassed to be sitting next to my dad. In the racier parts, I just removed his glasses so he couldn’t read the autocue!

While caustic and funny and with the thriller element to propel the plot, the opera casts an honest eye on what goes on in the bedrooms and kitchens of ordinary married couples. It also reveals what women talk about when there are no men around, so strikes a chord with married women while also ensuring that their daughters will all read the small print on their marriage licences.

In what way was the original story adapted for the opera?

The plot had to be truncated, obviously, but the pithy, edgy issues that rattle the psychological cages of your typical middle-aged mum are still in the story: menopause, body image, dieting, child raising, career options, thwarted promotions, being taken for granted, lack of foreplay, divorce, adultery…

The opera also emphasises for men that it’s in their interest to help more around the house. I do all my research in an in-depth, scientific fashion – only cocktails with girlfriends. And what I gleaned is that they’re just not having sex with their partners. Mainly because they feel resentful and exhausted. When you’ve worked all day, then come home and done all the housework and child wrangling, by the time you get into bed the one thing you’re fantasising about is sleep – and then you get the hand groping over the sheets.

Here is a man who hasn’t talked to you all day or helped you around the house and he thinks you’re in the mood for love. Men make horror movies called The Blob or The Thing. Wives would like to make horror movies about The Hand – the hand that creeps over from his side of the marital bed, just when you’re on the cusp of sleep. “Oh no! Anything but The Hand.”

What are some of the whackier things audiences can expect to see on stage? In one interview, composer Alan John mentioned a scene where one of the tenors has to pretend to be a dog “in a rather peculiar kind of game with a sex therapist”…

Yes, well, when the opera was staged by the Victorian Opera in Melbourne, my mum, dad and three sisters came to opening night. I’d forgotten about the racier elements of the story (including death by tampon) until the lights went down. Then of course, I was so embarrassed to be sitting next to my dad. In the racier parts, I just removed his glasses so he couldn’t read the autocue!

Some novelists are fortunate enough to have their work adapted for TV or film, but few would get to see their books come to life in an opera. What was that process like for you… and how do you feel about the fact that it is being brought back to the stage by State Opera during the Cabaret Festival?

I loved the process. It was incredibly exciting, hearing the beautiful music take shape. And I’m doubly thrilled that the opera is being re-staged at the Adelaide Cabaret Festival because I love Adelaide. Aged 16, I ran away from school and hitchhiked to Adelaide to perform in a group called The Salami Sisters, at the Adelaide Festival – and to stalk my hero, Spike Milligan. Plus, I performed my one-woman show at the festival three years ago.

And of course, [Cabaret Festival artistic director] Tina Arena is a heroine of mine. What I love best about her, besides her stunningly velvet vocals, is that she’s up there in the stellar realms of celebrity, and yet remains wonderfully grounded and down to earth. Which is why she can relate to HTKYH.

She’s also a feminist and wants to bring women’s stories to the stage. Plus she has a great sense of humour – her humour is drier than an AA clinic. Whenever we get together, we cackle like kookaburras. She also agrees with me, that women are each other’s human wonder bras – uplifting, supportive and making each other look bigger and better.

The novel was originally written in 2010 and a lot has happened in the world since then – including, of course, #MeToo. How well do you think the themes stand up in today?

I wish more had changed! But sadly, women still don’t have equal pay. Plus, we’re still doing the majority of the housework and childcare. The Dunkirk evacuation would have been easier to organise than a working mother getting her kids up and out of the house in the mornings.

Misogyny is still rife, and women must fight back the best way we know how – by comedically knee-capping all sexists. If you can laugh at a bully, you take his power away. Which is why this opera is, above all, funny.

Can you envisage any of your other works being turned into an opera? How about, say, Puberty Blues?

Well, Puberty Blues the musical is currently in development discussions. I hope to soon be driving around town with a casting couch strapped to my roof racks (ha ha)!

Meanwhile, I’m polishing my tiara for opening night. In fact, when the opera opened in Melbourne, Barry Humphries was my date. On the way to the theatre, I got the cab to wait while I dashed into a toy store and bought all their tiaras. Barry and I strode into the opera theatre bedecked in tiaras, and I then proceeded to give one to every opera critic as they arrived – because nobody can be mean to you when they’re wearing a tiara!

Since publication of this article, this weekend’s performances of How to Kill Your Husband have been cancelled due to a COVID-related illness.