Max Savage’s music is grounded in country, blues, rock and story-telling, but in Ern: Australia’s Greatest Hoax, he presents us with something darker. Also featuring composer Ross McHenry and a stellar band, last night’s performance was enigmatic, and if gothic jazz-n-roots was a thing, this would be that thing.

There’s more to the riddle than style, though, so let’s move onto the narrative. True story: in 1944, Adelaide’s Max Harris, of the avant-garde literary journal Angry Penguins, received a letter from “Ethel Malley” saying her brother Ern had died and she’d found some poems hidden away – might Harris be interested in having a look? He absolutely was, touting the unknown poet as a major deal in the modernist movement and publishing a collection of his poems in a special issue. Little did he know Ern Malley was a fictitious creation of James McAuley and Harold Stewart, two soldier poets seeking to publicly ridicule non-traditional poetry.

Although the pair wrote what they thought to be nonsensical verse with a cut-and-paste approach and dismantling of rhythm, the poems gained notoriety and the story of the hoax lives on to this day, making Malley a celebrated figure in creative works.

Savage’s new show Ern: Australia’s Greatest Hoax is his own take on the poems and story that have captivated him since childhood, and sees him share the stage with Adelaide jazz musicians McHenry, Adam Page, Julian Ferraretto, Django Rowe and Josh Baldwin.

With desperate lyrics of being drowned in the river and seeking gold out west, one might ask: Where is the hoax in this production? It could be situated in the points of view of McAuley and Stewart, two writers who might have thought that “The making of power / the making of words / a serious business / the killing of birds” was a rightful damnation of modernist poetry, something that broke from their beloved traditional bush tales and odes to landscape. I can’t be sure, and maybe that’s the point. What is modernism, after all, if not a series of whats and whys.

Unreliability is a central characteristic, so perhaps the show that doesn’t give us an easy version of the folklore is conceptually based on it – a modernist approach to a modernist approach. Savage has said that what he hoped to create was not a simple narrative but “a gestalt, built from improvised music, poetry, songs and painting that brings something new to the labyrinthine history of the Ern Malley Affair”. 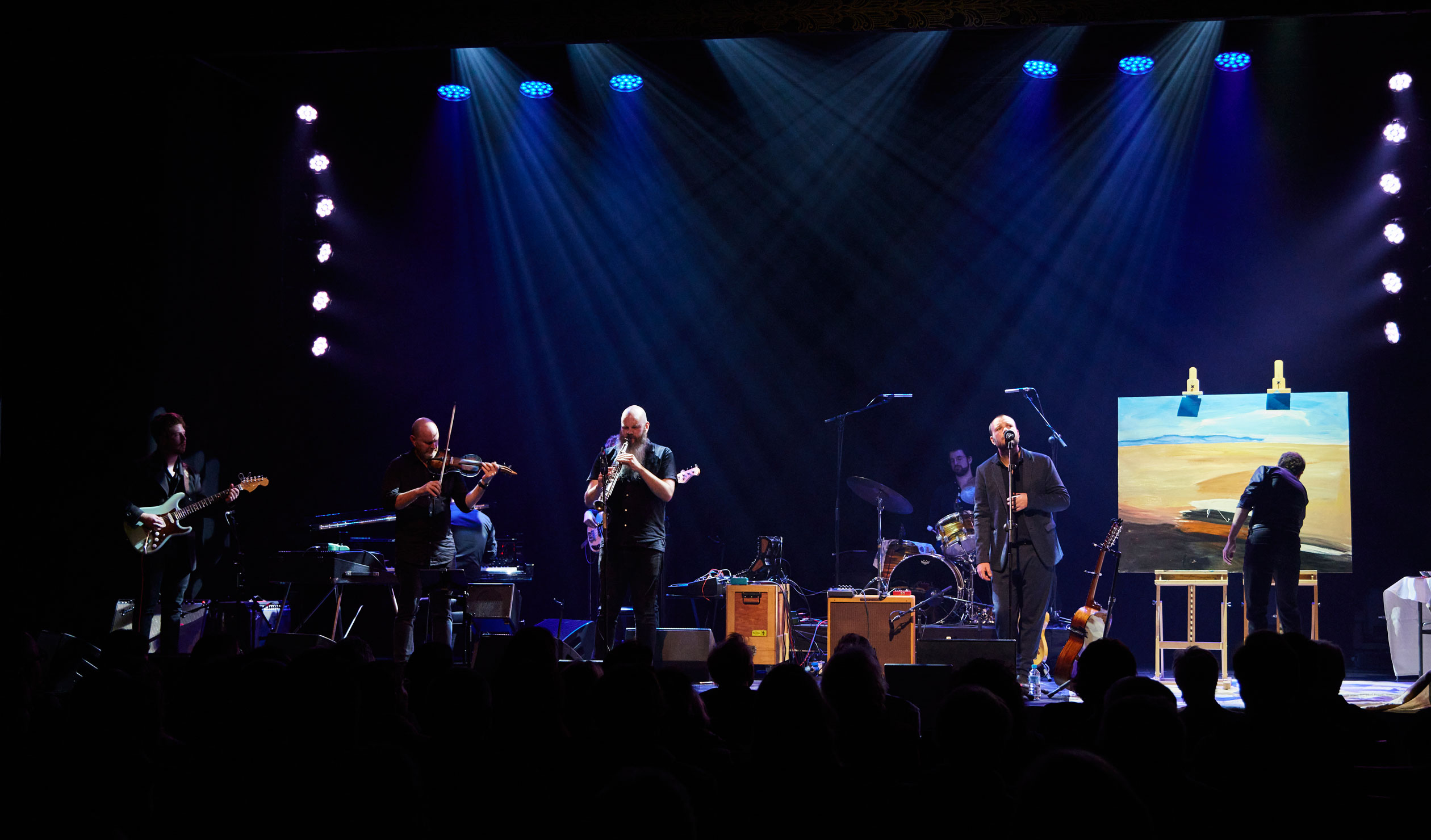 So what’s painting have to do with it, you might, ask as drummer and painter Josh Baldwin gets to work on a blank canvas the moment the music begins. Harris was part of John and Sunday Reed’s Heide Circle, which included painters Sidney Nolan and Arthur Boyd, among others. The group was hugely influential in Australia’s modernist art movement. You’ll even find Nolan’s Ern Malley painting gracing the cover of the original The Darkening Ecliptic, the posthumous surrealist poetry collection from our poet who never lived. As in the show, painting is the rightful backdrop to the Ern Malley affair.

Ern: Australia’s Greatest Hoax is the product of a prestigious Frank Ford Commission, a large grant given to South Australian artists who don’t commonly identify as cabaret performers but do have an interest it, and in this case it’s money very well spent. The musicianship is at the highest level and the live painting is incredible to watch. I’ve still got questions, but sometimes the best art is all about the probe.

Ern: Australia’s Greatest Hoax is being presented again tonight at the Space Theatre at part of the 2021 Adelaide Cabaret Festival.