The diversely talented cast comprises Adelaide Cabaret Festival artistic director Ali McGregor’s pick of carnival artists. Host Miss Frisky warned we were in for some shocking sights and delighted with her extensive vocal range, turning classic songs into cabaret in the style of a torch singer.

It didn’t take long for things to heat up, as Captain Kit showcased his hula-hoop skills while stripping. With beautiful tattoo art and tongue work to rival Mick Jagger, the sexy sailor set the tone for the evening. 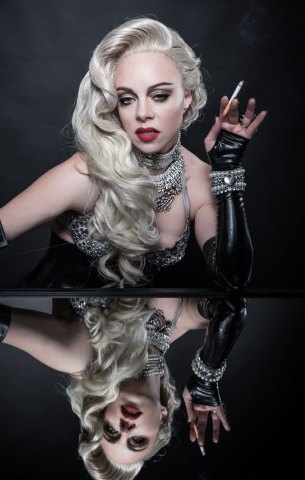 Next was the nerdy schoolboy who proved quite the Rubik’s Cube expert and continued to provide light relief between sets for much of the show. Towards the end, he showed just what a naughty boy he really is with his yo-yo ticks and, yes, you guessed it, stripping. Thank goodness for those tassels!

Imogen Kelly wowed with her graceful dancing reminiscent of French fan dancing and later in a 1920s-style costume — again, there was lots of flesh on display. Magician Lily Paskas went the full monty and did some risqué things with a red scarf. Later, she gave new meaning to having a hot body when she literally set fire to the pasties on her privates.

Two performers who kept their clothes on were Davy Sampford and Captain Frodo. Sampford treated us to a rock star juggling rendition and later demonstrated his total control over 12 spinning plates on vertical sticks. Contortionist Captain Frodo elicited shrieks from the audience in response to his double-jointed antics, and many laughs with his comedic presence and confetti.

There was acrobatics, singing, dancing, magic tricks and nudity, all set to an amazing soundtrack. While certainly one for the adults, Glorious Misfits is professional, impressive and oh so much fun.

If you want to see vaudeville circus done like never before, get along to this show. Highly recommended, just be ready for lots of flesh on display!