“No one would want to see me sing,” Leung admits, despite appearing as a headline act at this year’s Adelaide Cabaret Festival.

“I guess cabaret means different things to different people and if you look at it from a traditional point of view it is smoky bars in the underground parts of New York or even Germany in the Weimar period.

“I think where I sit in the program is that I’m doing something which is a very solo-based performance in a very intimate environment taking people on a mind game journey.”

Leung, the creator and star of ABC TV comedy shows Lawrence Leung’s Unbelievable and Choose Your Own Adventure, will invite sceptics and believers to take a trip into the pseudo-science world of séances and magic as part of his Cabaret Festival show Very Strange Things.

The show is a spin-off of Unbelievable, which featured Leung traveling around the world visiting sites of alleged paranormal activity such as haunted castles and catacombs.

Leung will recreate séances and mind reading games performed by fraudulent magicians and psychics during the Victorian age as part of his cabaret show. He will then invite audiences to decide whether they want him to reveal how he performs the tricks.

“Without giving too much away both myself and audience members get to unlock each other’s pin numbers, we can read each other’s thoughts and minds and no one in the room is psychic, not even me, yet we can do this through very psychological methods which remain either hidden or exposed throughout the show,” Leung says.

“People don’t realise how funny it is when they totally believe in something and they have the curtain revealed – that sort of Wizard of Oz moment. It all comes down to human psychology in the end and that’s what I’m kind of highlighting in the show.”

Leung says his fascination with the paranormal stemmed from his childhood.

“When I was a child I wanted to have superpowers – just like how every kid wants to be a superhero and have the ability to read minds and see UFOs and things like that.

“As I got older I got more invested in it and when I started studying science and psychology I realised I could look at these unexplainable things with another lens, which is rationality.”

Leung learnt to perform some of the tricks for Very Strange Things by looking through his collection of 19th century and early 20th century books on psychics and paranormalists.

“They outline very old school techniques that show how these people were conning people back then to believe that they had super powers. 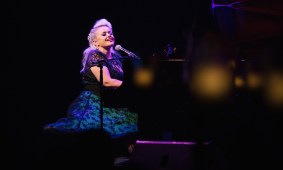 “It’s a bit unethical that they would sort of prey on people and say that they could talk to the dead and just be willing to take money from people.

“On the other hand, I’m doing it for entertainment and I will show you how these techniques looked back then but in a 21st century way.”

Leung says the message to take home is “be careful what you believe”.

“Especially in this age of misinformation and fake news and counter-claims of fake news it might be easier to be scammed.

“A show like this shows that even though we’re done with the technology they used for scams in the old days, the idea of people trying to hoodwink each other is as old as time itself.”

The Adelaide Cabaret Festival will run from June 8-23.