Her Majesty’s Theatre is quite possibly the most beautiful performance space in Adelaide, and a perfect arena for such a polished, professional act.

Jonathan Biggins, Drew Forsythe and Phillip Scott, accompanied by the incredible voice of Amanda Bishop (of Living with Julia fame), have drawn from some of their most famous sketches for a showcase to end all showcases.

The set is black with a mini grand sitting majestically centre-stage, behind which is a large screen projecting video and sound to accompany the actors.

The show begins with the “Fuhrer” John Howard and his gang of cronies: Janette Howard, Peter Dutton and the notorious Peter Costello. The on-stage chemistry that the four performers have built up over their many reincarnations is obvious, ensuring the show oozes with sarcasm and hilarity.

The audience is given a taste of the Wharf Revue across all formats – screen, music and stage. There’s favourites Clive Palmer and Gina Rinehart singing “My Heart Will Go On”, the Mark “Latham Diaries” and former New Zealand prime minister Helen Clarke as the lead singer of a band. 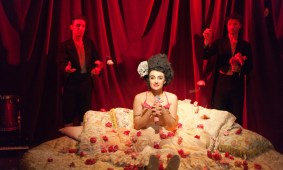 Songs for the Fallen full of delightful debauchery

The highlight, though, is Julia Gillard (Bishop) and Kevin Rudd’s (Scott) tribute to Phantom of the Opera, and Biggins’ Jean Valjean in the revue’s take on Les Miserables characterised as Les Liberales.

These career performers are near impossible to fault, particularly the marvellous Phil Scott, who musically directs and plays piano on stage. The group’s harmonies are impeccable, with Drew Forsythe’s wonderful bass ringing true and adding a wonderful wholesome sound.

I cannot praise this show enough. It is a wonderful celebration of the group’s longevity and finishes far too quickly.

The Wharf Revue: Celebrating 15 Years is being performed at Her Majesty’s Theatre until June 18 as part of the Adelaide Cabaret Festival.