Billed as “a rare, first-person account of surviving a stalker”, Rattled begins with the retelling of Gunn’s deeply unnerving third meeting with her stalker, dubbed “The Man”, when he claims, unconvincingly, that he bumped into her accidentally after spotting her across the park.

Their first two encounters were at an Adelaide auction house, and as the story unfolds readers learn how this stalker turns the writer’s life upside down when she realises she can’t make him stop; nowhere is safe anymore, and as the feelings of fear and powerless ramp up, so too does the impact on her mental health and family life. 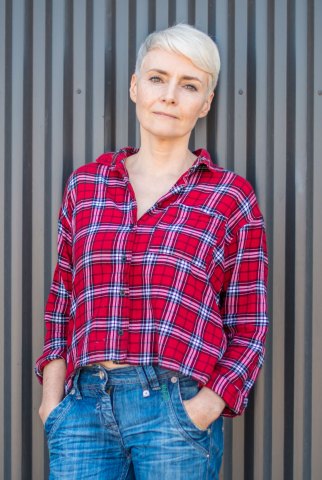 Gunn says that while writing the book in 2019, the stalking story and other incidents of sexual harassment she shares came quickly and easily, but she was also spurred to research the broader stalking phenomenon and what “drove a person to pursue another in this way”.

“I also wanted to understand more about our patriarchal culture, how stalking fitted into this larger structure, and the toll of misogyny on the mental and physical health of women, trans and non-binary people.”

The resulting book – which author Jane Caro’s cover blurb describes as “as gripping as a thriller, as moving as a tragedy, as passionate as a polemic and as practical as a manual” – was published this month by Allen & Unwin. The extract below is the first chapter of Rattled.

In the middle. The third time I met The Man (the park)

I’m walking through a park, on my way home, having just dropped my son off at school. Or not quite ‘just’. I’ve dropped my son off and I’ve been to the little café near the school where the coffee is good and the windows fold open onto a quiet, leafy street and a woman with two sausage dogs sits reading the morning paper while her dogs wait patiently by her chair. I’ve sipped my latte and answered emails and redrafted a poem, and then I’ve gathered my things and walked back past the school, leaf shadows dancing beneath my feet. I’ve crossed over the busy road, and now, now, I’m walking through this park with its vast beds of heavily laden rosebushes and its avenue of cherry-blossom trees, papery petals of rose and cherry drifting like pink snow along the edges of the path.

Someone calls my name.

I turn round and it’s a man on a bicycle, wearing black jeans, black jacket, black bike helmet. He’s silhouetted like a shadow against the pink backdrop of the rose beds. His bike is also black. As I turn towards him, a rainbow lorikeet shoots up from the cherry blossom, followed by a gang of noisy miners that swoop and dive around the anxious lori, shattering the air with their raucous squawking, pursuing it as it flees across the open grass.

The man cycles towards me. Hello, he says. You’re not on your bike today.

The wind suddenly picks up, whipping my hair across my face. I scrape the strands out of my eyes and glance round the park, but there’s no one else here. It’s just me and this man. I turn to look back at the street I just walked along, but there’s no one there either. There are only the glass-fronted office blocks and the solid sandstone of colonial municipal buildings. In the distance, traffic roars along the busier road, but the street that leads from there to here is quiet.

Something dark and clotted heaves inside me but I suppress the urge to lean over and vomit onto the flower beds. Instead, I smile back at the man. No, I say, I had to walk today.

It’s true that I would normally be on my bike. Normally, my son and I cycle to school together. I drop him off, go for a coffee, do a bit of writing, then cycle home. Last night, however, my son left his bike at a friend’s house, so this morning we walked, a change to the usual routine. Although this man is not a complete stranger, is someone I’ve met and spoken to on a couple of occasions, it’s odd that he would know anything about my usual routine.

He dismounts from his bike. Are you on your way home? he asks. Then, without waiting for an answer, I’ll walk with you.

And so, here we are, walking along the avenue of cherry trees that leads to the other side of the park. The blossoms drift down and catch in my hair. Tiny stones of panic rattle inside my rib cage as we leave the park and cross over the road to a wide, empty suburban street.

It’s funny me bumping into you like this, says the man. I saw you across the park. I recognised your pants.

I look down at my trousers. I bought them the weekend before last. I haven’t seen this man since I bought them, I don’t see how he can recognise them as mine. I consider saying, I’m sorry, I’ve forgotten something, and turning round, going back towards the safer, busier road where the everyday traffic is. But I don’t say this, I keep going, caught between the horror of walking alongside him and the fear of angering him by turning back. What might he do? Might he come after me, shove me into a doorway? Would anyone hear me if I screamed? I imagine him chasing me along the deserted street and the dark liquid bubbles up in my throat. I keep walking. He asks me questions and tells me things about himself and I answer politely and engage in conversation and I think how, from the outside, we must look like two people who know each other, who are perhaps even friends, strolling along a suburban street, having a perfectly ordinary conversation, not one person who is potentially psychotic and another who is fighting to hold the wild panic inside herself, who is trying very hard not to ruin the chocolate-box prettiness of the Federation houses with their shiny wrought-iron railings, their clipped lawns and neatly pruned bushes, by spraying the whole damn lot of them with thick, dark, blood-coloured vomit, with thin, bitter bile, with fear and anger and horror.

Rattled, by Ellis Gunn, is published by Allen & Unwin.