Every once in a while, I feel really old. More often than not, those moments are linked to the internet. There was that time a generational debate over skinny jeans went viral, spreading from Twitter arguments to podcasts and even the Guardian – and my generation was too old to even be included. It sent me to Rundle Mall to buy a pair of “mom jeans” (which I’ve worn exactly twice), fearing my faithful skinny jeans had become the equivalent of flares back in the ’80s, when only our daggy drama teacher was unaware they’d drastically dated.

Right now, I’m immersed in a book about what the young folk call being “extremely online” – and while it makes me feel ancient, it’s also riveting. Break the Internet: In Pursuit of Influence (Scribe) is a (sort-of) insider’s guide to the influencer industry by Olivia Yallop, who works at a London digital agency, acting as an intermediary between influencers and brands.

Yallop’s approach, though, is journalistic, moving between interviewing influencers and industry experts, or reporting on trends, and immersion journalism: attending an X-Factor taping where the real show happened outside the studio, as fans screamed for teenage twin TikTok stars filming themselves live; experimenting with becoming an influencer herself, hiring a photographer and trudging around London with a suitcase of fast-fashion outfits; attending (online, of course) an influencer boot-camp with a bunch of teenage gamers far more savvy than herself. 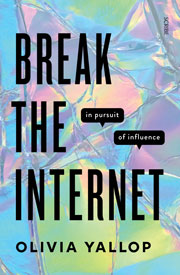 I’m learning things. What a “hype house” is (a carefully curated, deliberately chaotic sharehouse of influencers, whose overlapping online presences result in extra eyeballs for everyone – a more intense version of Big Brother.) Parenting influencers who use their kids’ acne or first periods, or first funerals, as content opportunities. “Junklord YouTube”: a genre where “creators” compete for attention with oversized stunts like “SPENDING 24 HOURS IN A HOT TUB FILLED WITH PEANUT BUTTER”, or, in one case, filling his brother’s house with slime and buying him a new one to make up for it.

But Yallop doesn’t just take cheap shots at the excesses and outrages of influencer culture; she looks at the societal shifts that have contributed to “influencer” becoming an increasingly popular aspiration, including the attrition of media jobs and the precarity of the labour market, making self-employment as a “creator” more attractive and seemingly obtainable.

Early in the book, she describes her career trajectory from a prestigious advertising agency with crumbling budgets and systems, to her current job, working at the cutting edge of digital/influencer culture. And one of the most interesting things about this book, apart from the many weird titbits, is her tracing of our evolution from Hollywood to reality TV to the internet – which then evolved from anonymous Tumblr blogs to Instagram influencers and TikTok stars.

“Early generations of the internet famous were kids who were not 100 per cent popular or confident in real life,” one interviewee tells Yallop. “Influencers are the popular kids now.”

Internet-famous Clementine Ford became a household name as a fierce-witted feminist polemicist, first with her regular columns and then two books about how rigid gender norms hurt us all: her blockbuster debut Fight Like a Girl and its follow-up, Boys Will be Boys. Her new book, How We Love (Allen & Unwin), a series of personal essays that span all kinds of love – for a parent, a child, a friend, a lover, a partner – shows a softer, more vulnerable side than many are used to. 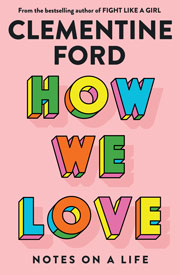 Ford opens with the story of losing her mother to cancer when she was in her 20s, remembering hearing the news at the Exeter Hotel, as she had drinks with friends. The story is infused with complicated love, and the bittersweetness of parenting the young son her mother never met, repeating rituals of her childhood like tucking a story under the pillow at bedtime (books for young Clementine, a cherished Lego catalogue for her son).

She ranges between Adelaide, Melbourne and, in one especially poignant and piercing essay, small-town England, where at 13 she was flattered by the attentions of her adult boss at the ice-cream parlour where she worked after school, until he tried to convert vague flirtations to action. That essay, “Sweetie”, is a multi-layered exploration of how adolescent insecurity and longing to grow up can be exploited.

Ford’s voice is engagingly, sardonically funny, with sharp social observations interwoven with self-deprecating lines like: “I could never really summon the passion for a demanding routine of gothic depression. I occasionally wore black, but only because my mother told me it was slimming.” And while this book is not overtly political, her feminist ideals underlie these stories, particularly in the way they question and subvert traditional gender expectations.

A cross between Caitlin Moran, Nora Ephron and Tina Fey, this charming collection is enriched by an underlying complexity and intelligence. And as an added bonus, Adelaide readers can enjoy details like cycling through the flat streets of the city centre at night, or drinks at The Wheaty. 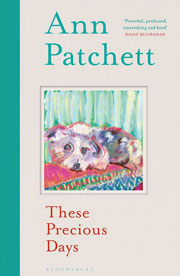 Another book of essays I’ve just snaffled is Ann Patchett’s These Precious Days (Bloomsbury). I’ve read her last essay collection, This is the Story of a Happy Marriage, more than once, and can’t wait to dive into this one, which she apparently wrote during the pandemic because it felt like the wrong time to be starting a novel. The essays, she said, reminded her that she was a writer. Topics include the three men she called her fathers, the unexpected influence of Snoopy, how to answer when someone asks why you don’t have children, and unexpectedly falling into a life-changing friendship with Tom Hanks.

Speaking of being influenced by the internet, next time I’m in the bookshop I am going to bring home the tantalisingly titled short-story collection Today a Woman Went Mad in the Supermarket (Bloomsbury), by Hilma Wolitzer. Why? Many of my fellow booksellers, readers whose taste I trust and follow, have been posting rave reviews that highlight this book’s deft combination of smart, funny and acutely observed. Just what I feel like reading! 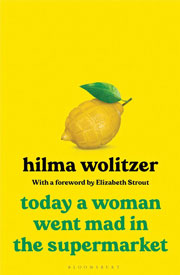 The first story in Wolitzer’s collection was published in 1966, the last written and published in 2020. More than half of the stories follow the marriage of “gloriously ordinary” Paulie and Howard, from their sudden marriage when Paulie found herself “in trouble” at the age of 20 “in those dark ages before legalised abortion”, to the couple catching COVID-19 in 2020. From hasty weddings to meddlesome neighbours, ex-wives who just won’t leave, and sleepless nights spent worrying about unanswered chainmail, she expertly captures the tensions, contradictions and unexpected detours of daily life.

Oh, and the clincher that means I absolutely need this book? I’ve just realised that Hilma Wolitzer is the (91-year-old) mother of Meg Wolitzer, whose novel The Interestings is among my favourites of the past decade.

Getting back (no pun intended) to feeling old, I’ve spent many enjoyable evenings this past week lying in bed with a cup of tea and watching Peter Jackson’s Beatles documentary. I’ve always been a John fan more than a Paul (and remain so), but I was charmed by watching Paul’s creative process, as stray tunes grew into great songs, then gained layers of richness and meaning, over eight hours of film. (I also, controversially, admired the way he kept the band on track, despite their resentment. This is probably also a product of being old.) I was charmed enough that I am tempted to dip into Paul McCartney’s new two-book box-set, The Lyrics (Allen Lane), the closest thing he has to an autobiography. 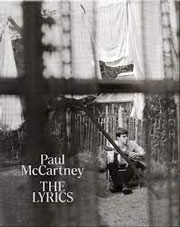 The Lyrics gathers together 154 songs, spanning his boyhood through The Beatles and Wings (hmmm, that’s where he loses me) to now. “More often than I can count, I’ve been asked if I would write an autobiography, but the time has never been right,” McCartney says. “The one thing I’ve always managed to do, whether at home or on the road, is to write new songs. I know that some people, when they get to a certain age, like to go to a diary to recall day-to-day events from the past, but I have no such notebooks. What I do have are my songs, hundreds of them, which I’ve learned serve much the same purpose.” At $155 ($120 at Imprints this summer), it’s not cheap – but would make a terrific Christmas present for fans.