Literary events are back – or, so it seems. And this bookseller has been soaking in them. Thursday night, I was at Marion Cultural Centre, interviewing Hannah Kent about her marvellous queer love story partially set in 19th-century South Australia, Devotion (Picador). Hannah was regal in a peach satin gown, hair artfully upswept, while I was wearing a cockatoo-emblazoned skirt my mother had warned me was quite short when she arrived to drive me across town. (She also asked if I was going to brush my hair. I said no, then I went to the bathroom and brushed it.) While we were standing in the book-signing queue after the event so Mum – a huge fan – could collect Hannah’s signature, Jayne Webster from Marion Libraries enthused about hosting live events again. “I can’t wait for next year,” she said.

Then I spent the weekend at the Australian Short Story Festival, a national event that rotates annually between Melbourne, Perth and Adelaide. I imbibed fragments, as you do at these things. Carol LeFevre talked about connected short-story collections (like her own Murmurations, and Elizabeth Strout’s Olive Kitteridge) as being more like life than novels – because in life, too, there are gaps in the lives of people we encounter, that we imagine ourselves into. “A novel tries to pack everything in. Life is messy.” Which made me think about Helen Garner’s published diaries: their parcelled-out fragments of reflection and observation, the gaps in the narrative, the initials instead of names, so you have to puzzle out who people might be. 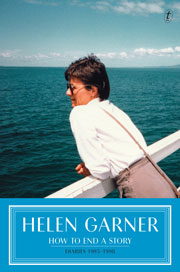 I’ve been deep-diving into How to End a Story: Diaries 1995–1998 (Text), the third volume of Helen Garner’s diaries. I found the first two books meditative, cut through with sublime fragments of truth and insight, tiny perfect observations. Those fragments are still there in How to End a Story, but the mood is restless, eaten-alive anxious, and compellingly propulsive. It’s a devastating portrait of the end of a marriage, told over three difficult years where the moments of connection and joy are outweighed, increasingly, by their opposite. “I think I am in the classic position of a woman artist who in order to maintain a marriage is obliged to trim herself so as not to make her husband feel – what? Something a man is not supposed to have to feel?”

Her husband, “V”, is a high-profile, old-fashioned (proclaimed “modernist”) Australian writer, threatened by her success. One central battle between them is his commandeering of their flat every day, for his work, while she must vacate the premises to work in an office, where she longs for the respite of the domestic comforts he enjoys all day. Another is his incredible gaslighting: an affair he long denies, with a woman painter who lives nearby.

While this volume is rich in small human moments and intimate reflections on being a writer (including on the controversial The First Stone), the central drama gives How to End a Story the quality of a novel. A messy, fragmented one, with gaps for the reader to imagine their way into. Very much like life. 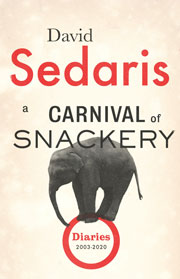 Another extremely well- loved writer, similarly known for their daily habit of diary-keeping, is David Sedaris. He’s a very different writer to Garner, of course, but A Carnival of Snackery: Diaries 2003–2020 (Hachette) is, like hers, fascinating. It’s a great read, but it’s also fascinating how these writers manage to produce such writerly diaries – books that read as if they were designed to be read. Both writers openly talk about mining their diaries for creative inspiration, and for words.

Sedaris’s material, like his New Yorker essays, ranges widely, from his family (a local journalist tells him that whenever he’s in the New Yorker, his dad calls to instruct them to interview him), his partner Hugh, observations and overheard snippets gathered from around the world, and odd moments. He dines with Phyllis Diller. “You’re a stand-up only you don’t know it,” she tells him. This is a collection to dip in and out of at leisure. And yes, the family bits are, as always, Sedaris at his best.

I’m a huge fan of Jeff Sparrow, whose 2019 book Trigger Warnings: Political correctness and the Rise of the Right was one of the best things I read this year – a clear-eyed examination of how our political landscape evolved into the mess that it is, critiquing both the left and the right. A former editor of Overland, Sparrow is firmly in the “left” camp, but he’s also one of the most original thinkers we have, never bound by the orthodoxy of fashionable thought. 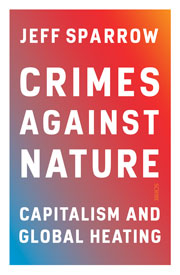 I’ll admit, I find it difficult to read about climate change at the moment, because the problem feels overwhelming and ultimately fatal to all of us. But Crimes Against Nature: Capitalism and Global Heating (Scribe) promises hope. Continuing a central thesis of Trigger Warnings, Sparrow argues that ordinary people are not a collective obstacle to change, but a potentially powerful force: they’ve always overwhelmingly opposed destruction of the environment we live in. It’s also a warning call, directing us to focus our attention away from changing our individual behaviour and towards collective pressure on the systemic culprits of climate-change destruction: the corporations and powerful industries whose interests have always prevailed, shaping the society we live in – from the way we work, the air we breathe and the contents of our waterways, to our infrastructure.

This book is full of alarming and fascinating facts. Did you know electric cars were actually much more common than the now-conventional internal-combustion engines in the early days of the industry? Or that car-industry interest groups deliberately shut down public transport options to eliminate competition? (Side-note: this happened in Adelaide too, with the destruction of our tram network.) The car culture that seems inevitable now, as an essential way of living in our societies, was made – and our societies were then structured around them.

Anti-waste campaigns that coined the term “litterbug”, and the current focus on recycling plastics, were created by industry PR, responding to public hatred of waste by turning the focus and responsibility away from them and onto individuals. Did you know BP invented the “carbon footprint”?  Or that the inherent alienation of working Henry Ford’s production line, with its multiple repetitive tasks replacing a craftsman’s mastery of the whole process, was not an unfortunate by-product of the system, but a deliberate strategy to control workers?

Crimes Against Nature doesn’t offer easy solutions, but it does show how the way we live, and where we’re heading, is not inevitable – how humans made it, and thus have the potential for making a different way, if enough of us can come together to demand it. 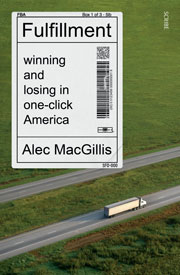 Reading Sparrow has convinced me that my next read will be Fulfillment: Winning and Losing in One-Click America (Alec MacGillis, Scribe), a book that has been on my to-read pile for about a month, and seems the logical next reading step. It’s an investigation into the huge impact of Amazon on America – not just on its workers, but on how it has changed the very structure of the country. It ranges from the businesses and jobs displaced by Amazon’s plentiful, poorly provisioned, precarious workplaces, to Amazon as a force in Washington DC. Having just read about how working conditions were drastically reformed and societies reorganised at the start of the Industrial Revolution, this feels like it will be interesting (and probably terrifying) to compare as a similarly far-reaching development.

Of course, our individual consumer decisions can’t stop this change on a global level, as Sparrow teaches. But I do feel lucky to be working at an independent bookshop, where I can drink coffee at the counter and easily take a bathroom break, and where none of my tasks are timed. Where during my last shift, a regular customer brought Jason a towering sunflower and gave me tips on where I could buy a sequinned mask like his (Adelaide Central Market, if you’re wondering).  Where, when you buy a book, you’re helping to not just sustain a great place to visit, but to keep jobs like mine in existence. Thank you! (Next step: systemic change.)