Devotion, the third novel from Adelaide-based internationally bestselling author Hannah Kent, is a surprise: a 19th-century queer love story with a supernatural twist.

“It’s a love letter,” she says, inspired by the marriage plebiscite and her wife Heidi’s proposal. “There’s no way I would have written this book had I not met Heidi.” She describes their relationship as one of “total recognition” – two words she recorded as a touchstone in one of her notebooks while conceiving this novel.

Kent’s original idea was to write a fast friendship between two women that a modern reader could project ambiguity onto. But then she changed her mind. “I wanted to be really clear about the fact they’re two women who love each other. And I wanted the characters to be fully aware of that. Because that’s what I want to read. What queer communities want to read. We deserve those sorts of narratives now.” 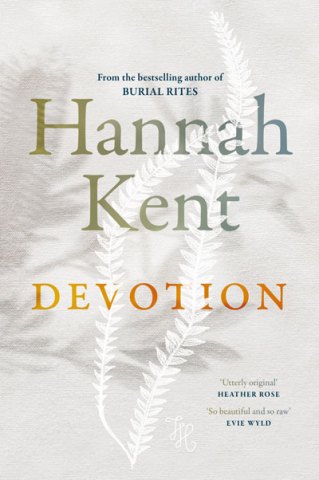 Her first novel set in Australia, Devotion follows Hanne, a nature-worshipping young woman knitted into a close religious community, on her journey from German Prussia to South Australia. Fleeing religious persecution at home, her Lutheran fellow villagers re-establish themselves in the Adelaide Hills, in the settlement that would become Hanhdorf (Bukartilla), displacing the Peramangk traditional owners and their culture in their quest to preserve their own.

Hanne’s life is transformed when Thea, her great love, arrives in her village with her family not long before their migration. Hanne, an outsider, feels recognised on a bone-deep level for the first time – and feels a connection, too, with Thea’s herbalist mother, Anna Maria, rumoured to practise witchcraft.

I’ve known Hannah since before she was famous, when we worked together on the early days of Kill Your Darlings, the literary magazine she co-founded with Rebecca Starford. Having organised this interview through her publicist, I was oddly nervous, unsure how to act. But when she walked through the door of Muratti’s on Prospect Road, wearing a baggy black jumper over faded jeans, eyes smiling over her mask, I immediately relaxed, even before she tried to argue that she should pay for our take-away coffees. Every time I see Hannah over the years, I’m reminded that the only way literary fame has changed her is to make her slightly apologetic for it.

A few doors down at Prospect Library, mask off in a closed meeting room, Hannah says she’s “very grateful, that at least some people might know my name”. We’re talking about the difficulty of releasing a book during COVID, when readers are more likely to stick to authors they know and love, and online interviews and events have replaced book tours… except in Adelaide, where we sit – another thing Hannah is grateful for. She is careful to calibrate any small complaint with these reminders. It’s a product of these COVID times, she reflects: this blend of struggling and being aware of your own privilege.

Like her literary blockbuster debut, Burial Rites, about the last woman executed in Iceland, and The Good People, which explored the tragic result of attempts to “recover” a disabled boy in 19th-century Ireland, Devotion intimately inhabits its historical setting. And like those earlier novels, it uses real events as a jumping-off point to explore enduringly relevant questions of ethics, human behaviour, faith and belief, creating space for the unknown. All three novels centre women on the margins of their societies.

I’ll be a reader all my life. But will I write for my whole life? I don’t know

I ask if it felt risky, with such a huge mainstream commercial following, to write a queer love story.

“Totally!” she says, without hesitation. And not just that, but her experimentations with language (the novel is characterised by exquisite, lushly romantic poetic interludes), and the supernatural elements, which have grown more pronounced with each of Hannah’s novels, each felt like a risk. “It’s like I’ve been running up to the diving board and changing my mind, and finally jumped off. It was a joy to write in that sense.”

Part of what allowed her to write this book, she says, is deciding that she may not always write, which allowed her to be less constricted by the idea of a career. “I’ll be a reader all my life,” she says. “But will I write for my whole life? I don’t know.” She jokes about the idea that, if she were to keep doing the same thing in an effort to keep her readership happy, “people would expect me to pluck a criminal woman from history and write about it every few years”.

The relationship at the novel’s core freed Hannah from the close duty to research that characterised Burial Rites and The Good People, both based on true crimes. It simply wasn’t possible to find the kind of relationship she wanted to explore in the historical record, which has excluded domestic female experience (let alone queer relationships) until very recently.

“I decided I could just prop myself against history, like a leaning board,” she says.

Her anxiety about Australia’s colonial history, and her need to avoid fetishising it, is one reason she’s avoided setting her novels here before now. “I have so much aversion towards our colonial history.” She didn’t want to convey the experiences of First Nations or Aboriginal people. “I’m not Indigenous. It’s not my place.” But she also felt that avoiding those experiences would be to whitewash history. Her consultation with Peramangk Elder Mandy Brown was vitally important to getting the novel right.

While Hannah is uncomfortable with local history, she’s passionately connected to the natural environment of the Adelaide Hills, where she grew up and now lives with Heidi and their two young children. Some of the most beautiful passages in Devotion are descriptions of the natural environment. “We lay there for years. The moon waxed and waned over us, and out hair knitted into the forest floor. Our open palms grew skins of moss.”

“There’s a lot of myself in the younger Hanne,” she says. Hanne connects with her natural environment on a sensual level: she can hear the song of the trees, and the forest in her home village is her personal cathedral. Hannah remembers waking up on winter mornings to sit in the frost in her gumboots, wrapping her arms around her favourite oak tree, and reading outside among the trees. “They were my dreaming places.”

Faith and belief are intrinsic to Devotion: Hanne’s community are persecuted for their beliefs, and in turn they persecute Thea’s mother, Anna Maria, for her suspected use of magic. And in Australia, of course, the beliefs and culture of the Indigenous inhabitants, including the Peramangk traditional owners of the Hanhndorf (Bukartilla) area, are disregarded by the invading villagers – not even perceived as real. It’s a canny parallel with the way Hanne and Thea’s queer love is invisible to those around them – it’s literally unimaginable by their community.

“I don’t think you can write a queer relationship in a historical context without mentioning religion,” says Kent. “It was such a huge part of people’s lives, not just in terms of a belief system, but in terms of how their communities were organised on a day-to-day basis.”

While she wanted to embed her characters in that reality, she also wanted to avoid writing a novel of shame or self-hatred. I won’t reveal how she solves that conundrum, except to say it’s an unconventional, vividly imagined choice that feels deeply real, even as it prompts the reader to question their own beliefs.

I ask Kent about her own beliefs. She reminds me that while she wasn’t raised in a religious household, she started attending church when she was 19. Then she stepped away after coming out as queer, feeling alienated from God and a spiritual life as a result. There was a period of grieving. She’s since circled back, to a certain extent, and considers herself a spiritual person, believing in some kind of “greater being” that is “so much bigger than anything we can possibly imagine”. And while she admires much about Christianity, the faith she is most familiar with, she believes that organised religion is our way of trying to fit something into our lives that we can’t fully comprehend.

“I just think – don’t judge people and try to love everyone,” she concludes, laughing. “Those things are hard enough. Let’s just stick to that, without adding any complications.”

Devotion, by Hannah Kent, is published by Picador Australia and available now.