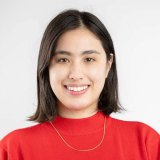 “Some shout about muddy skin because they think it’s funny. Others try to clean you up.” This opening sentiment in Muddy People is repeated throughout the memoir – with Sara El Sayed making allusions to her “muddiness” in various stages of her life.

El Sayed’s skin is different from the pale majority of her classmates, her parents are on different sides of the same religion, and sickness, tradition and conformity is constantly threatening to mess up her clean-cut, white-bread vision of what it means to be Australian.

But despite these serious, painful experiences and anxieties, she navigates her story with a strong sense of humour and refreshing candour. Her use of the colloquial vernacular and cultural references of modern-day Australia (fully sick, Australia’s Next Top Model and servo meat pies, to name a few) make the experience of reading Muddy People comparable to catching up with a friend and listening to them to vent about their family and friends.

El-Sayed’s ability to seamlessly intertwine her Egyptian and Australian culture throughout the novel shines a light on the often confusing, hilarious liminality of the migrant experience.

Her narrator does not approve of the sun-kissed babes of Home and Away’s Summer Bay, but desperately wants to buy a bikini. She wants to fall in love with someone who understands her religion, but she doesn’t want him to be Muslim.

She’s grown up with the snotty boys and primped-up girls who shape her everyday identity but is desperate to conserve some aspect of the modesty, deliciousness and tradition seen on the sweltering streets of Alexandria. There isn’t a straight path to finding herself: El Sayed is often confused, conflicted – muddy.

Like Alice Pung and Benjamin Law before her, El Sayed lifts the migrant experience from conversations over dinner and corner shops into the public domain. Muddy People makes it known that these experiences are as valid as growing up with a Vegemite sandwich in your lunchbox. Her style, flair and brutal honesty are a refreshing take from the “othered”, repressed, eager-to-please migrant character prevalent in Australian popular culture.

The author creates a safe space for migrants to explore, shape and rebel against identity without leaning on stereotypes. And because of this, Muddy People is refreshingly real and raw; it isn’t afraid of getting a little dirty.

Olivia De Zilva is an award-winning writer and arts critic living in Kaurna Land. She received first-class Honours in Creative Writing at the University of Adelaide and was awarded the Deakin Non-Fiction Prize in 2019. She curates the No Wave Poetry reading series each month at the Wheatsheaf hotel.