“When my country collapsed, I was on a swing.
My mother shouted from her window, ‘hold on, hold on’.” (pg 1)

With these spare lines, Dinić opens this collection, immediately transporting us to the exact moment her world disintegrates – and foreshadowing the strength and grit she will need to survive.

Riven by war, Yugoslavia splintered into its constituent republics in the early 1990s and when the smoke cleared, the world of Dinić’s childhood was gone. Migrating to Australia in 1993, she spoke several languages, none of them English. The bookshelves she left behind were crammed with works by the masters of Serbian, Croatian and Russian literature, names she lists with the familiarity of friends.

“Don’t you understand past tense?
You had a house.
You had friends. 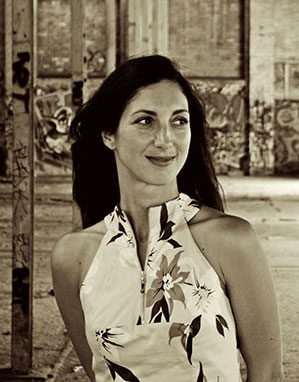 Dinić writes in a succinct, deceptively simple style, calling to mind another great name in the rollcall of Serbian literature – Vasko Popa. Like Popa, Dinić’s work is rich with a mix of allusion to Balkan fairytales and the details of the domestic realm, the mythological and every day in constant interplay. Whether writing of her Yugoslavian childhood, her memories of lost landscapes and family or her new family in the Adelaide Hills, Dinić’s distinctive voice evokes a dream-like world in which grandfathers speak in epigrams, children possess uncanny insight and the ordinary contains the mythic in the way an acorn contains the oak.

With a clarity that belies its depth, Dinić’s writing can evoke an entire landscape and its traditions with a single stanza, each word invested with multiple layers of meaning.

“When I visit my village
only the water in the well
is still alive.” (pg 75)

To read these poems is so much more than a glimpse into the grief, dislocation and struggles of a migrant fleeing war. It is to look through the eyes of a woman for whom language is the key to crafting a new home from the traditions and memories of her past.

Dinić’s facility with wordplay and minutely observed details that speak of grander themes is a hard-won skill that comes from years of standing between languages and cultures, watching, listening and sifting with a fierce intelligence.

Powerful, playful and profound, it is easy to see why this collection won Dinić the 2019 Adelaide Festival Unpublished Manuscript Prize. To read these poems is like looking into a still pond, the longer you look, the greater the depths revealed.

In the Room with the She Wolf is published by Wakefield Press.

Langhorne Creek grapes to make a splash in Victoria