Ianto Ware was once told by his mother, Dimity Ann Ware, that when she married his father she “didn’t know there was an alternative”. The marriage didn’t last, and she spent the next four decades carving a “radical, feminist, socialist, lesbian” life out of that unknown.

“When she came out, that was only a few years after Dr [Ian George] Duncan had been killed, and just after homosexuality had been legalised in South Australia,” Ware explains of his mother’s efforts to kick off the blanket of heteronormativity pulled over 20th-century South Australia. 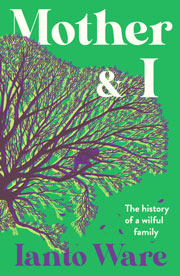 “When I was born there were no other queer families that we really knew at that point because it was so unheard of. If I’d been born 10 years earlier, it’s highly likely that I would have been forcibly adopted.”

Ware’s mother was diagnosed with kidney disease at a young age, underwent a transplant in her 20s, and was routinely confronted with troubling prognoses and reminders of her mortality. This, Ware writes, left her “largely immune to the quasi-medical moralism of the times”, and helped steel her resolve to reject convention for the rest of her life. She divorced her husband shortly after Ware was conceived – against the advice of doctors, who worried a pregnancy might further complicate her condition.

“There’s that expression Reagan and Thatcher used about ‘broken families’; I never considered my family ‘broken’, but there’s a lot of families that live under the weight of external bias or people who feel like they need your family to be a kind of ‘folk devil’ to feel legitimate. I wanted to write back to that, mostly because as a little kid it was quite scary.”

Despite such pressures, Mother & I is often warm, funny and insightful. In one passage, an adolescent Ianto falls in with a group of his male peers and experiences first-hand the way in which boys often socialise themselves through an unhealthy mix of homophobia and misogyny. Noticing a change in his behaviour, Dimity’s response was blunt: “You’re becoming patriarchal.”

“To me, it felt like there was a definite point where it’s like, ‘okay, this is what men do, they act like this’. And it was pretty horrible. My observation is it seems like a lot of men find it horrible – but they don’t grow up with radical feminist, socialist mothers, so it’s harder to see.

“I get the impression that some of the problems a lot of men have now, the aggression issues, a lot of that is [because] they haven’t had access to that way of thinking.”

At the centre of the book is their family home in Flinders Park. Specifically its garden, an unruly tangle of oak trees and vegetables that disrupted the quiet conformity of its suburban setting, troubling neighbours and delighting a young Ianto. Perhaps unsurprisingly, it was uprooted and flattened to make way for townhouses as soon as it was sold – to pay for assisted living that his mother ultimately did not live to see.

“Most of the writing projects I’ve done in the past I’ve enjoyed doing,” Ware says of capturing the garden after it was razed. “This one was pretty horrible, going back and remembering that place. There was nothing like it in the neighbourhood; otherwise a very dull, conservative lower-middle-class, working-class neighbourhood, and then there was this massive impenetrable garden that she had built out of nowhere.

“There were bits of it you couldn’t walk through because the foliage was so dense. It worked quite well; I felt most safe at home. Being at home was lovely and playing in the garden was great – it was just the points when I had to go into the outside world that were scary.”

The family home in Flinders Park had an unruly garden that was a sanctuary for the young Ianto.

Mother & I often draws from diaries and poetry Ware found shortly before his mother’s death in 2018, placing her voice at the centre of their story as he tries to make sense of their life, and his loss.

“I started reading them after she died, and like the book itself, it was pretty full-on – it was an emotional experience. I think she would have wanted to publish and write more if she could have, but it’s really hard to do when you’re a working-class single parent with a major health problem.”

One passage, written before Ware’s first birthday, describes their private jungle in its infancy:

Today I planted eggplant.
Next to the capsicum
The garden grows homely
As I settle down here alone.
There’s geranium, lavender
Sage, thyme and nasturtium.
Slowly I’m building a life of my own.

There’s an old proverb, ostensibly Greek, that says: “Society grows great when old men plant trees whose shade they know they shall never sit in.” There are plenty of books about great old men. Less common are ones about avowedly unconventional women, the ones who grow a garden just for themselves and their family – and in the process, contribute to a world in which alternatives to the norm aren’t quite so hard to picture.

Mother & I – The fable of a wilful family, by Ianto Ware, is published by Hunter Publishers Australia.

Timing is right for smartwatch launch into Europe, US