Persimmons are ripening in orange globules against the grey Colorbond fence over which they hang. This is in our small carpark, out the front, in our historically Greek area.

Some say the persimmon is the lotus, the “fruit of oblivion” so seductive that Odysseus had to drag his sailors from the Lotus Eaters’ island and tie them weeping to their oars. 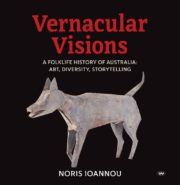 I guess the Odyssey is a kind of folk tale, I’m thinking as I see Dr Noris Ioannou off the premises. Noris’s new book, Vernacular Visions, is subtitled A Folklife History of Australia: Art, Diversity, Storytelling. He didn’t want to leave by the front door, having entered at the side where Maddy Sexton rules our “front” desk and small retail shop.

“I’m not particularly superstitious, but as I write books about (usually material) traditions, and as I am Greek Cypriot by birth, I have always made an effort to honour my mother’s Cypriot customs – especially the same door entrance and exit!”

Noris Ioannou left Cyprus for Australia as a boy with his family. I’m wondering, but forget to ask, if they departed on a big ship like the one in Crete-born Anastasia Bekos’s painting (Pier Day) reproduced in his book. The image is both poignant and hopeful, you can’t be sure which.

Not Greek, but German-Australian folk culture and artists, especially Barossa Valley potters, have threaded their way through a number of Noris’s previous books. In Vernacular Visions he tells the delicious story of “Tepper” Hoffman, still famous in local lore for maintaining a secret source of  special clay.

“To make a shiny pot he walked past Kaiserstuhl toward Eden Valley, to Flaxman Valley, where he stayed there for the night and came back with a bag of clay carried on his back.”

Hoffman made at least 18 types of wares at his farm pottery in Rowland Flat, Noris tells us – and shows us this photo of six examples, made between the early 1850s and early 1880s. Have a guess which was used for pickling and storing, which for baking, which in making quark cheese. 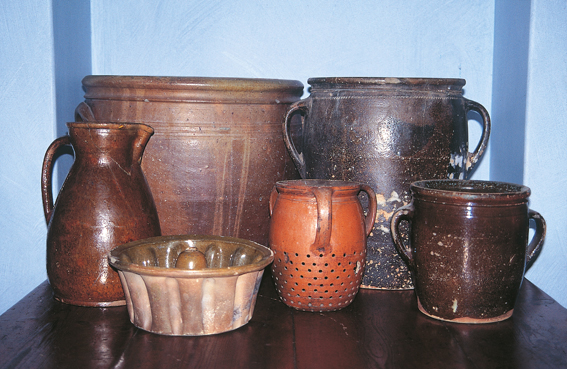 “Australian folk or naïve artists,” Noris writes, “are the unofficial documenters of local histories – of ordinary people, specific places and the events that fill out the substance of everyday life.” This ennobling of the everyday, and of what people manage to create with their days, is one of the aspects I most like about his many-faceted book.

Maude Baillie of Wedge Island (10sqkm in the Spencer Gulf) carved this chiffonier, we learn, from wattle timber using just a pocket knife and a chisel. The piece is from the early 1900s. I saw it recently in the Art Gallery of SA. The detail is hypnotising.

I wonder how they transported it to the mainland. Certainly not in a “Tarakalanijantu” (“Turtle boat”). Tiwi potters Mark Puatjimi and Cyril James Kerinauia created this earthenware sculpture in 1999 on Bathurst Island, Northern Territory – a long way, in space, time and cultural influence, from Maude Baillie and Wedge Island, but the sculpture and chiffonier figure together in Vernacular Visions as Australian folk art. The “vigorous sculptures” from Tiwi Pottery (founded in 1972), Noris tells us, are “linked to traditional forms and stories… simulating the painted wooden sculptures of the region”.

It’s not always smooth sailing in the folk world, of course. Dipping in, I’m struck by Alan Tucker’s 1994 painting, Racism in Football, which tells of a famous victory. It celebrates a  story of reconciliation, but racism in footy is still everyday news 27 years later.

Gnomes also inhabit Vernacular Visions. Thomas Bosley, Adelaide-born son and nephew of Staffordshire migrant potters, when aged 65 and thrown out of work during the Great Depression, commenced at his bungalow to create “Bosleyware”, which became almost a household name, thanks to figurines such as this curious little fellow.

“No other pottery in all of Australia produced articles quite like Bosleyware,” writes Norris. “The range of articles – the birds, animals and reptile figures, the breadcrocks with their mottled sponged glazes, the crisp lines of the Art Deco vases and other art wares – are instantly recognisable as Bosleyware: naïve, colourful, impressionable and, seemingly against all odds, cheery.”

Not a bad way to be in this world.

This wooden pulley toy, made in the 1790s by a Sydney convict to keep rich kids – moguls John and Elizabeth Macarthur’s brood – cheery, “may be the earliest documented item of folk art created in Australia”. I’d like to touch it, feel the smooth cedar wood, pull it along to the shop with me.

I’m forever peering into gardens as I wander, thinking, “One day, one day, I must try learning some domestic artistry”. I won’t, and sadly couldn’t, manage to make a mosaic or shell garden inspired by the “Celtic decorative tradition of embellishing everything”. See how proudly, in the 1890s, James and Caroline Warwick stand in front of their Old Curiosity Shop in Ballarat.

Meanwhile, debate rages about the persimmons here at Wakefield Press. I say it’s best to pick them, leave them till they’re squishy and almost rotting in the fruit bowl, then stew them with other fruit, preferably quinces. Editor Julia Beaven, world’s best cake-maker, says nup, you can use them when they’re hard and smooth. Different strokes for different folks.

Labor guarantees country health funding - but not a surplus