The books investigate the riddle of familial duty and the cost of patriarchy; Australia’s racist colonial history; species-ism and humanity as it exists within the natural world; the devastating impact of sexual violence for victims as well as criminal justice professionals; and the trauma associated with physical violence inflicted upon women.

Collectively, the books are testament to the minds of thinking, writing women mapping the architecture of social and cultural change.

Fathoms: The World in the Whale by Rebecca Giggs

Many of us enjoy venturing a few metres out into the sea to swim, surf or just cool off. Rebecca Giggs’ enthralling Fathoms: The World in the Whale presents whales as immense, enigmatic, intelligent and majestic sea creatures, but also vividly describes the intricate ecosystem of the vast oceans in which they live and die.

Drawing from science, history, literature, art and mythology, Fathoms is both epic in scale and rich in detail about the life cycle of whales, their behaviours and sociality.

This sweeping research is interspersed with Giggs’ own quest for understanding, which begins at a whale stranding and continues through experiences of eating whale meat and closely observing these mammals on a whale-watching tour.

This makes Fathoms filled with information but also personal, as Giggs weaves her own insights and feelings about whales and the natural world into the narrative.

Arguing passionately for whales’ right to survive, many of her stories of our treatment of these creatures are heartbreaking and haunting. Whether it is humans hunting and killing whales and overfishing their food sources, or our polluting the oceans and destroying their habitats, whales remain highly vulnerable.

This could make for profoundly depressing reading. Instead, Fathoms is optimistic. We can address over-fishing, stop polluting the seas and start working seriously on restorative remediation. This message is especially important in a year in which concern for the environment has fallen behind the issues raised by the COVID-19 pandemic.

Fathoms calls for a new “Save the Whales” campaign. Public activism has stopped most whaling and we can rise to this new challenge, in the process also safeguarding countless numbers of no less important sea creatures.

Revenge: Murder in Three Parts has a vortex-like rhythm, with its gut-wrenching tale about the cost of fortitude and self-sufficiency.

If you break between sittings, you are likely to dream in the way narrative wires us to dream: circling stand-alone memories that never stand alone in the mind’s eye, turning time inside out.

Yannie lives in Malaysia, her life largely devoted to caring for her parents. Despite her intellectual feats, which exceed her brother’s exponentially, her parents tell her they can’t afford to send her to university. They have agreed to provide additional support for Yannie’s brother to undertake further study. He, too, betrays her.

The reader falls for Yannie, wanting to know and unknow her in the way we want to unknow all of those things we know innately and immediately yet incompletely.

Yannie is highly emotionally intelligent, artistic and thoughtful. Her everyday practice is self-denial. The word “entropy” emerges literally and metaphorically throughout the novel. Lim invites us to consider the ramifications of the slow seep of unused energy, the cost of duty and sacrifice, deep inequity, unrequited longing.

Revenge is an unflinching investigation of how a life cultivates a mind. Lim pushes us to consider the enduring and sometimes devastating impact of missed moments and our thinking upon them.

Books that do not end, and will never end, leave us with questions. At the heart of this book is the following question: “What does it take, to see and not see […] at the same time?”

The Animals in that Country by Laura Jean McKay

The Animals in that Country is that rare thing: an intellectually ambitious, formally innovative Australian novel that is accessible to a broad readership. It’s also wonderfully macabre.

The central character is Jean, a mature-aged alcoholic working her way up at a remote wildlife park. She used to clean the dunnies, now she drives the little tourist train. 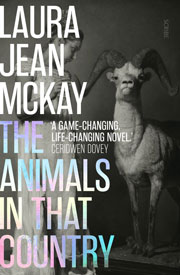 Jean’s ambition is to become a ranger, but anyone can see she’s incapable of completing the required certificate. Her boss changes the subject whenever it comes up.

Jean has one sober day per week: it’s a massive effort, but it’s a service in aid of maintaining her primary human relationship with her six-year-old granddaughter, Kimberly.

Kimberly and Jean love animals. They work tirelessly together on a scrapbook filled with plans for their own animal park. The relationship between these two is precious, refreshingly full and beautifully rendered by McKay: cementing Jean, despite all her faults, as a heroine with true heart.

I was surprised at how bloody funny this book is. The first 50 pages move a little slowly, and at times the Aussie vernacular is too over-cooked, even for comic effect, but once Jean hits the road in pursuit of Kimberly, who has been stolen by her mother’s ex, the narrative takes a sophisticated turn and the book’s extraordinary, slightly surreal central project, takes off. Down the highway, we’re in the realm of horror.

This is a work of fiction utterly capable of swaying the cultural imaginary.

McKay completed this novel as part of a creative writing PhD at the University of Melbourne, and it is a testament to the quality of writing coming out of Australia’s higher-degree writing programs: well-researched, impeccably crafted, and, above all, intelligent.

Sexual assault and murder carry high maximum sentences for good reason. They cause damage, havoc and lifelong pain and can rip society apart. None of us want perpetrators to stay hidden and unjudged. We want the criminal justice system to do its work. 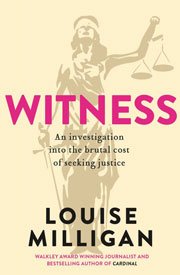 And so, when victims of sexual assault envy murder victims “because they don’t have to relive being killed, over and over”, when what finally breaks them is not the crime but what happens next, we all have a stake in making justice work better.

In Witness, Louise Milligan asks where is the balance to be struck between the rights of defendants and the rights of witnesses – and of complainants in particular.

Can we presume an accused person to be innocent – as she agrees we should – without irreparably damaging the lives of those who report sexual crimes and give evidence?

Milligan has the credentials: court reporter; investigative journalist; witness in the trial of Cardinal George Pell; and the victim of the crime committed by an invisible stranger who repeatedly threatened to kill her.

She has clearly earned the trust not only of victims, but also of judges and senior barristers who speak candidly about the impact of vicarious trauma on them and their colleagues, and who know they are working in an imperfect system.

Milligan writes about the “cognitive dissonance” required for a barrister to be able to belittle a child witness, ultimately proved to be telling the truth about sexual abuse, and then go home to their own children.

Witness is a harrowing read. Not because Milligan has sensationalised the experiences described to her: the court transcripts speak for themselves. But because she exposes the damage done, not only to complainants, but to everyone involved in the criminal justice system, and makes it our concern.

Stone Sky Gold Mountain is a bellwether novel, acknowledging Australia’s racist colonial history, suggesting that settlers from many countries were complicit in the worst outrages against Indigenous people, and underlining centuries of attack and control of women by men. 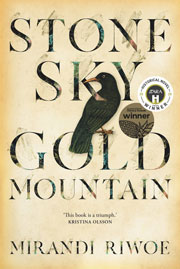 Set in 1877 in Queensland’s Palmer River goldfields, the novel imagines a gap in Australian history, bringing to the foreground young working women, shackled by class, gender and race, seeking freedom and tenderness in a violent shanty town.

The story begins with the exiled Lai Yue and his sister Ying questing for gold to free their siblings, sold into slavery to pay their father’s gambling debts; and with the grieving and myopic Meriem, a single mother keeping house for a whore.

Ying dresses as a boy to survive. Meriem and her employer Sophie ply traditional women’s trades – housekeeping and sex work – and the three defend each other.

We fear for Lai Yue, burdened with filial duty, paying the price of men’s brutality to each other. Chinese speculators outnumber Europeans yet remain vulnerable to racism, their homeland criminal gangs, known as tongs, and starvation. Is Ying’s brother enlivened only by conscience, or is his inner voice darker, more unsettling than that? Who is responsible when an explosion of frontier violence subsumes him?

Taken deep into each character’s consciousness, we absorb their trauma and resilience.

The bush and riverscape seethe with heat and humidity. Riwoe’s language is assured, lyric and lush with vivid imagery of transplanted Chinese culture.

Ghosts and opium memes bring foreboding. How does one tell white men apart when they all look the same? Ever ironic, Riwoe. Read in two sittings. Twice.

At the opening of Evie Wyld’s The Bass Rock, a young girl discovers a suitcase washed up on the beach: a dead woman’s fingers inching out, and between them, an eye that blinks.

At the novel’s closing, a woman is hurriedly packing a suitcase for her and her daughter, intending to leave an abusive marriage. She is waiting for a taxi when the front door quietly closes. 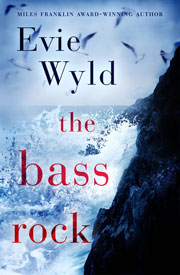 These two short scenes frame a novel that dwells on the violence inflicted on three women by manipulating and aggressive men. Set on the coast of Scotland, the dark volcanic Bass Rock looms over North Berwick as a dark presence around which the stories are fashioned.

In the 21st century, Viviane is living an unpredictable existence in London, when her Uncle Christopher requests she look after the family home in North Berwick until it is sold. Shortly after the second world war, Ruth is living in the same North Berwick house with new husband Peter and his two sons.

In the 18th century, Joseph recounts how Sarah, accused of being a witch and brutally raped by village boys, is saved from being burned by his father. But when the thugs rally support, the girl and family must run, or they could all burn.

The Bass Rock has seven sections, each containing five chapters that move from the present through to the past and back again. Themes of mental illness and grief are braided into the novel, and the young children in Ruth’s story, become the older characters in Viviane’s.

At the end of each section a short tale is recounted about a nameless woman; each woman suffering maltreatment.

This is a deeply disturbing novel, yet one also revelling in grace and the small wonders of life: new and fragile friendships, tender moments of love and unearthly happenings.

UPDATE: Evie Wyld’s The Bass Rock was announced the winner of the 2021 Stella Prize at a ceremony on the evening of April 22. Read more here.

Julia Prendergast is a senior lecturer, Writing and Literature, at Swinburne University of Technology; Catherine McKinnon is discipline leader — English and Creative Writing, at the University of Wollongong; Donna Lee Brien is Emeritus Professor, Creative Industries, at CQUniversity Australia; Gay Lynch is an adjunct academic in Creative Writing and English at Flinders University, and Julienne van Loon is Associate Professor, Writing and Publishing, in at the School of Media & Communication at RMIT University. This article is republished from The Conversation under a Creative Commons licence. Read the original article.

Stealing the show with life hacks for teens