“I was driving in the Lake Gairdner region, north of Eyre Peninsula,” photographic artist Alex Frayne tells me. “Very much 4WD country, with no one around except, on the horizon, a tiny vehicle travelling in the same direction as I was.

“Curious, I pulled in beside the little car at the next roadside stop. The travellers, a pair of young South Koreans, explained they were searching for the place where a famous Korean actor had filmed a car commercial in the 1990s.”

We are part of the world indeed!

Alex Frayne’s new contribution to the world is a big and beautiful book, Landscapes of South Australia. 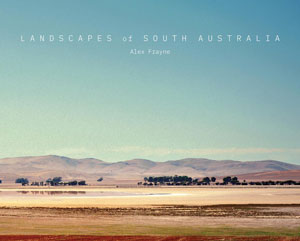 “Frayne’s subject is Adelaide and South Australia,” critic Murray Bramwell writes in a foreword, “but there is nothing parochial or derivative about his work.”

Writing in The Australian, Melbourne critic Simon Caterson called Landscapes of South Australia “a hypnotic visual essay at once serene and sublime”, adding that the book “confirms Frayne … deserves to be thought of alongside Ansel Adams and the other great landscape photographers”.

Ansel Adams is famous for his 20th-century images the American west. We nearly lost Alex Frayne to the US for a while last year. He planned to photograph scenes from the American election campaign. If a book of election images had eventuated, it would have been a fine book, no doubt, but one of many. The virus intervened, and instead we have a unique book for the ages.

Trawling emails, I remember that Alex and I were discussing a potential Landscapes book already in 2014, soon after we published his first book, Adelaide Noir.  Much of Alex’s 2020 was spent enhancing his already vast portfolio of images from across this broad state, heading out yonder when his publisher wondered if we were showing enough of wheat, wine or mines, plotting the layout of paired pages with designer Nick Phillips to create a book structured not by regions but by colour, form, history, light and the eye.

It worked. I’d like to dissolve into this image, Dog in Fog, from the Adelaide Park Lands and an oval I remember mistily but can’t quite place. 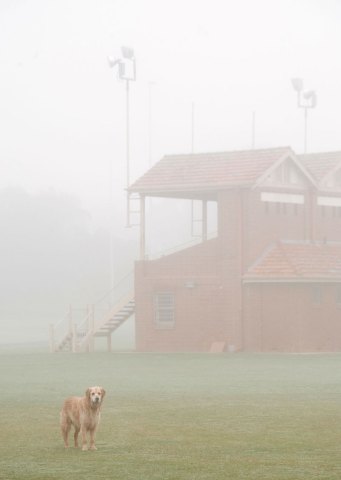 There’s alluring mystery, too, in Dust Bowl, on the facing page, from a place called Borrika (population 42) in mallee country. Romance is tinged with menace in the images. As you look, you wonder what might happen next in these pictures. 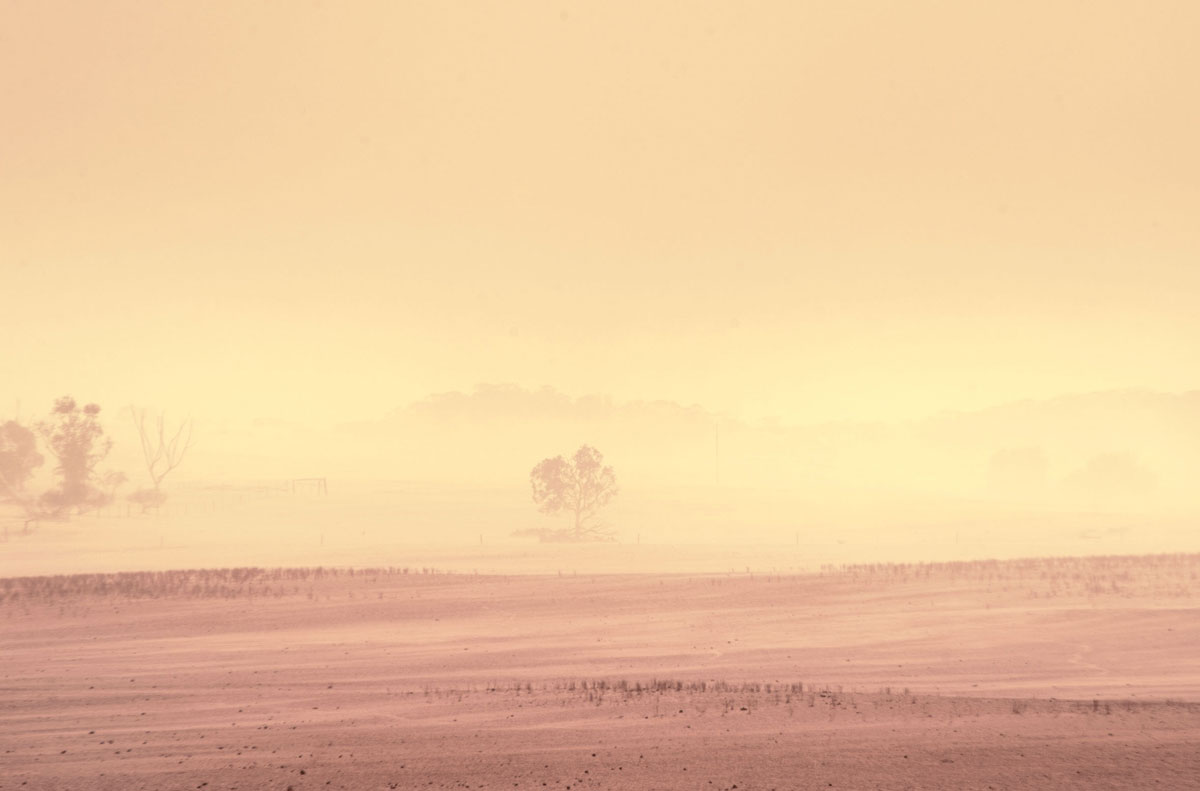 A sense of time, passing but only over centuries or eons, pervades Igneous, from Kings Beach on the Fleurieu, with its ancient dark rocks sunlit and in shadow, bright sea lapping on the craggy shore. Next to it sits silent Salem, from a solitudinous part of the Adelaide Hills, photographed in parched brown and yellow surrounds. 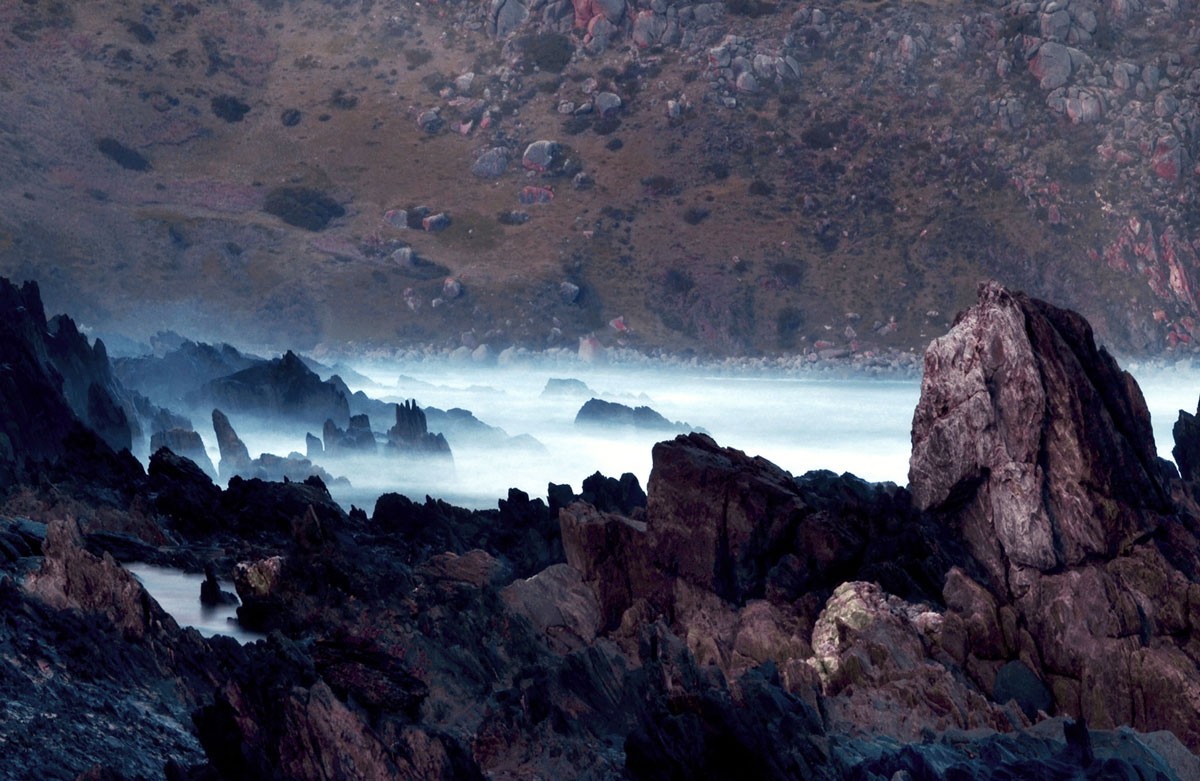 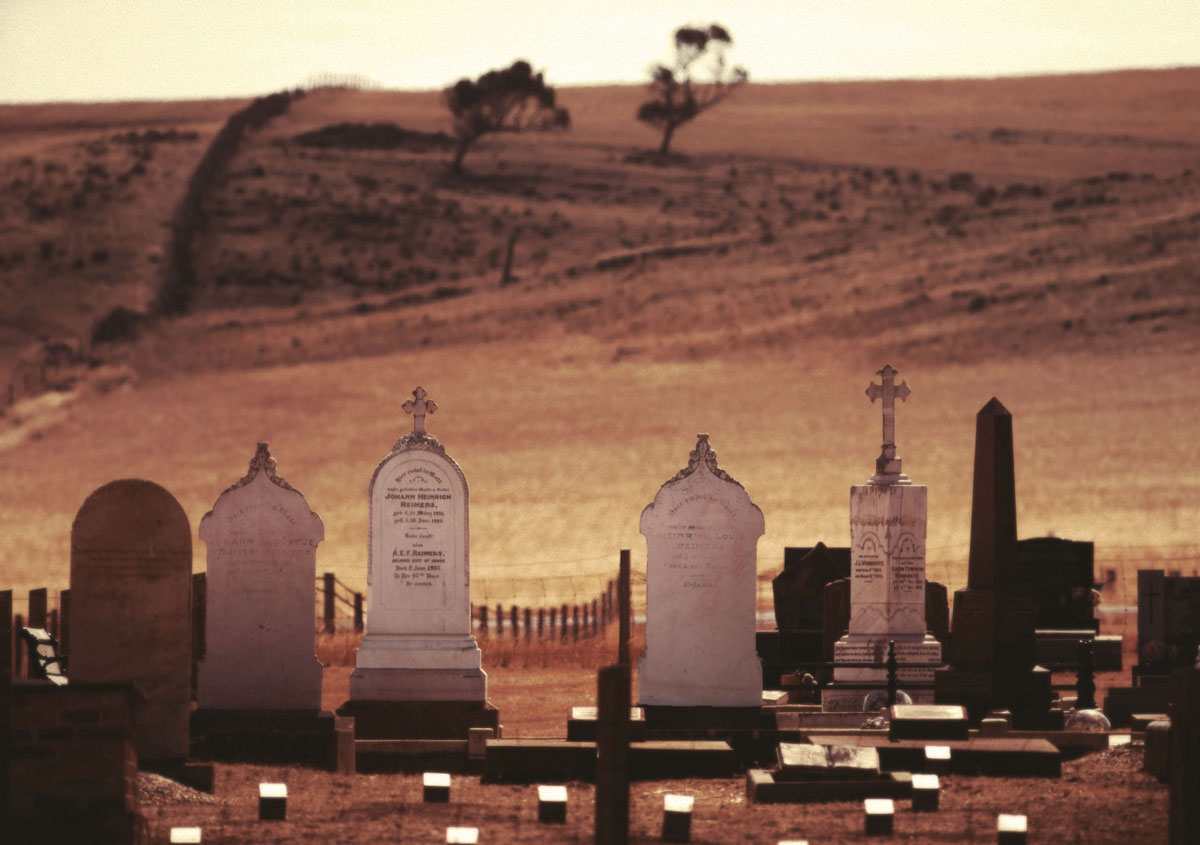 Rail Fought the Road and the Road Won, from up at Burra, explains the beautiful image at the top of this article; it is at once cheerful and sad. On the facing page, a multi-coloured Freighter keeps goods moving across vast expanses via Pimba on the transcontinental railway line. 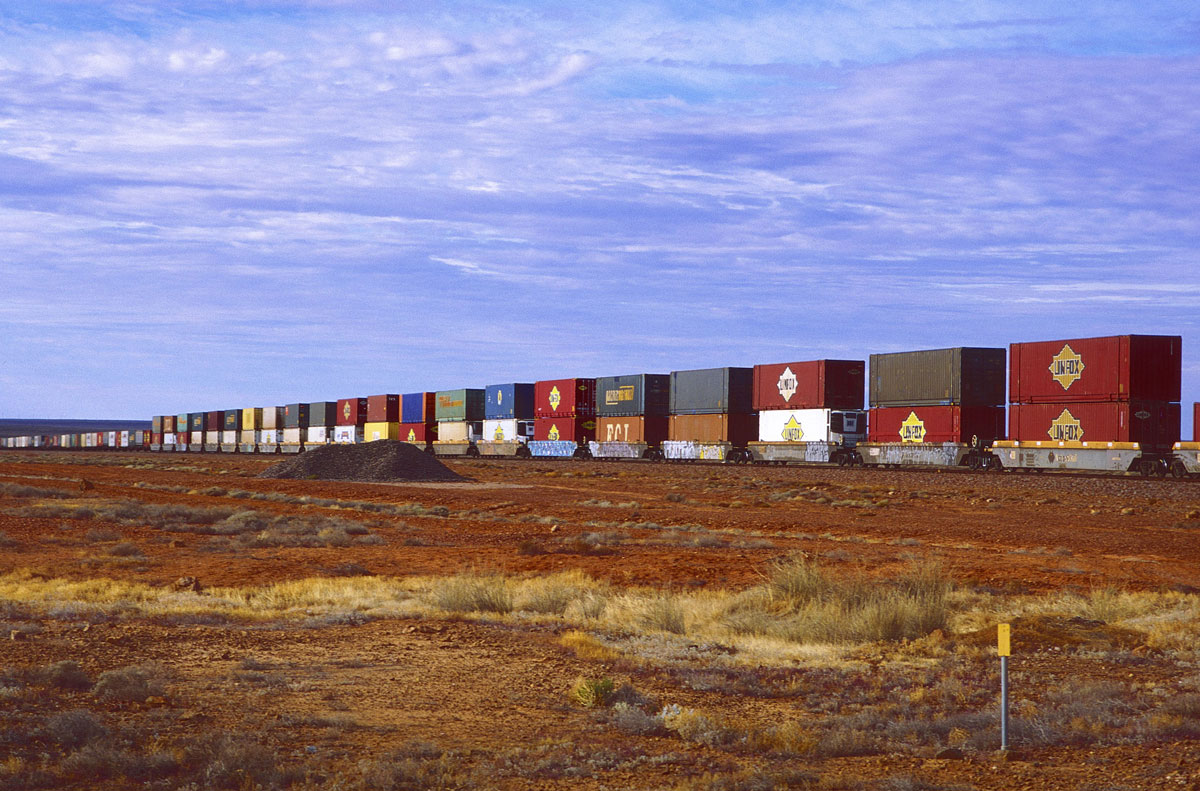 How do our gardens grow?  Alex has a magnificent, brooding-but-hopeful photograph of November Rain at outback Illeroo Station, black clouds forming over green-grey saltbush still lit by sun. Next to it, from Woodchester near Strathalbyn, springs a bright yellow field of Canola with a lone bare tree in its middle under blue sky and wispy cloud. 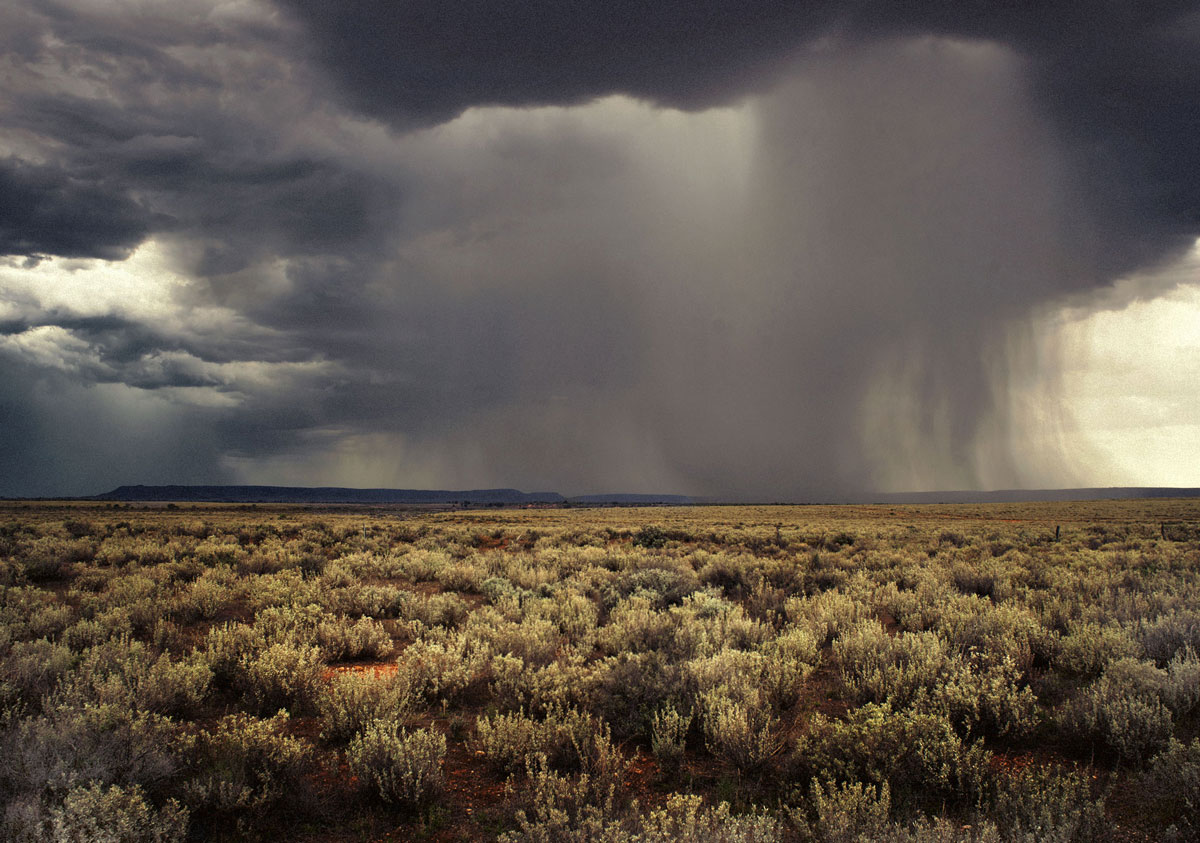 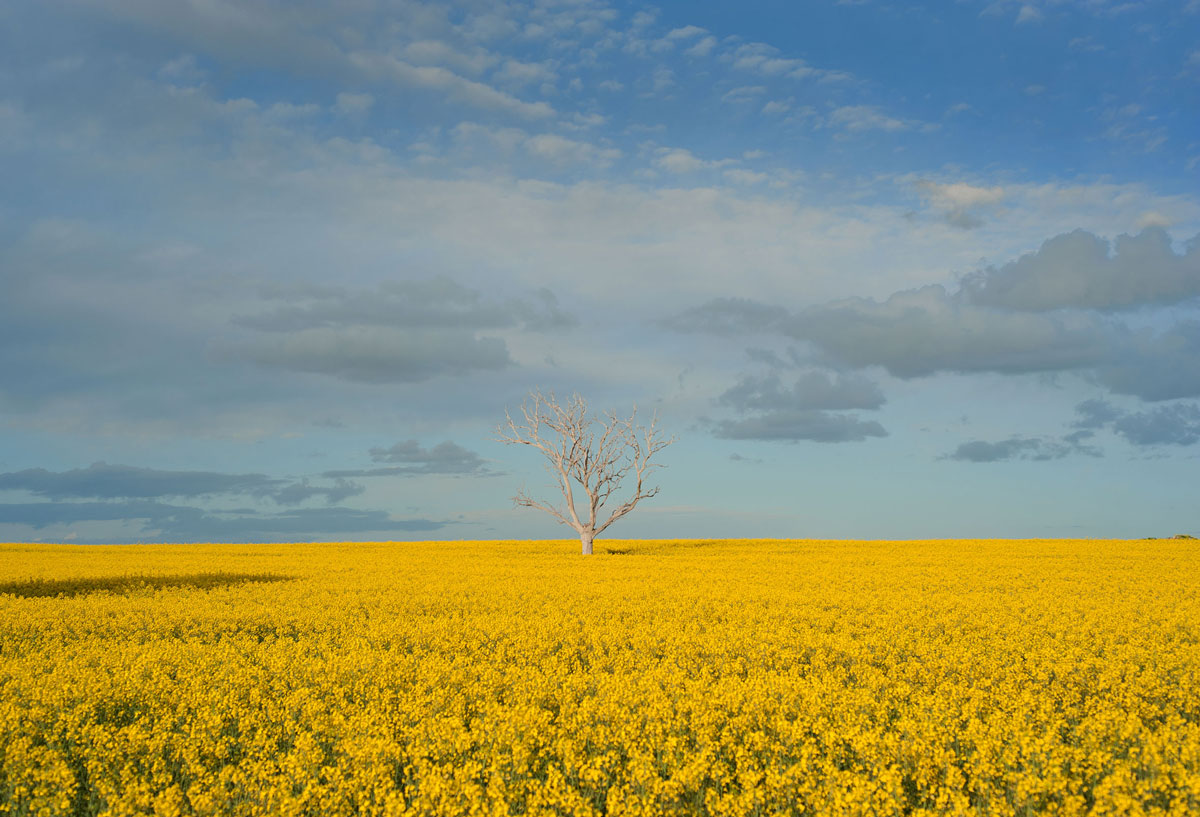 I’m always surprised when I come upon those yellow fields as I drive through the hills. Surprised, too, each time I peer through Landscapes of South Australia. Alex Frayne gets around. As Murray Bramwell writes, he  “uses light, and flair, and a great deal of patience, to shape and contour, create and record what is there to be seen but rarely found”.

Sadly I wasn’t there when it snowed at Mount Lofty in November. Alex was, and I’m happy he brought back this enchanting photograph to show it. 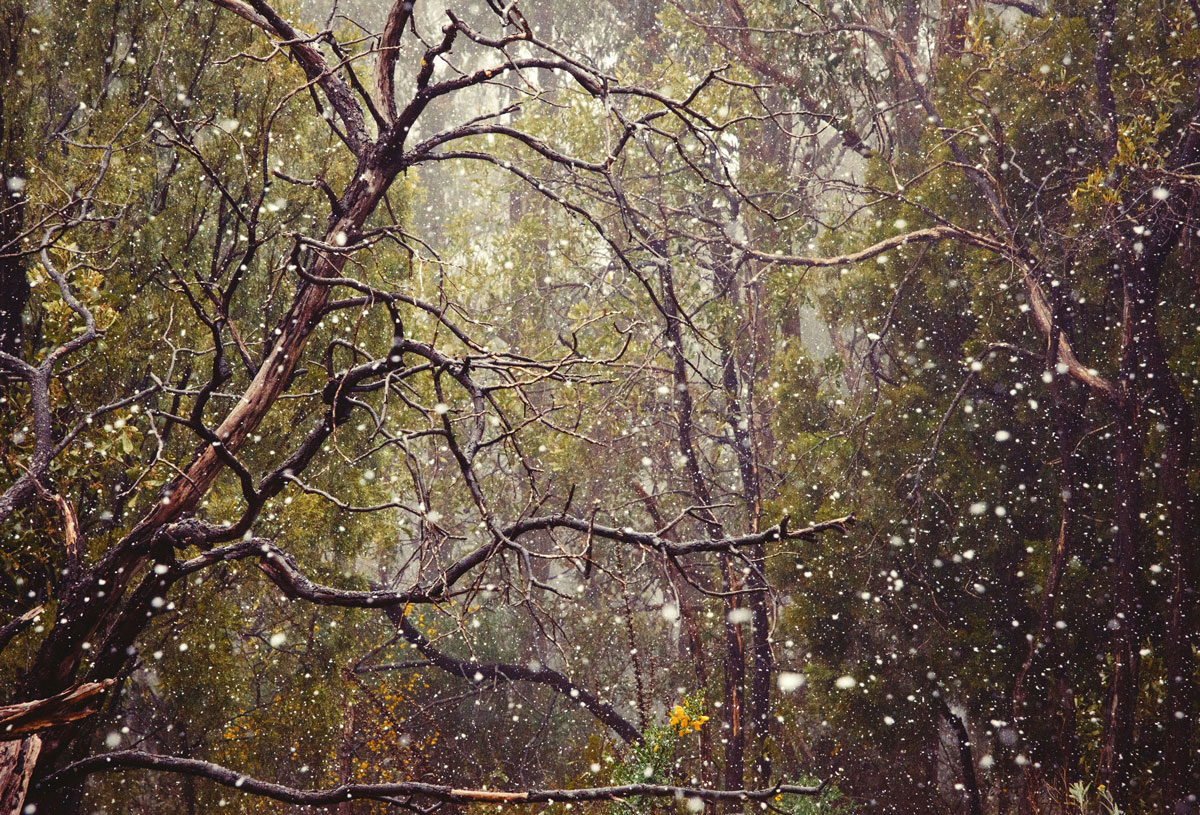 Mustn’t leave in summer without a beach view. Here’s Pram, as in a Dream, from Semaphore. 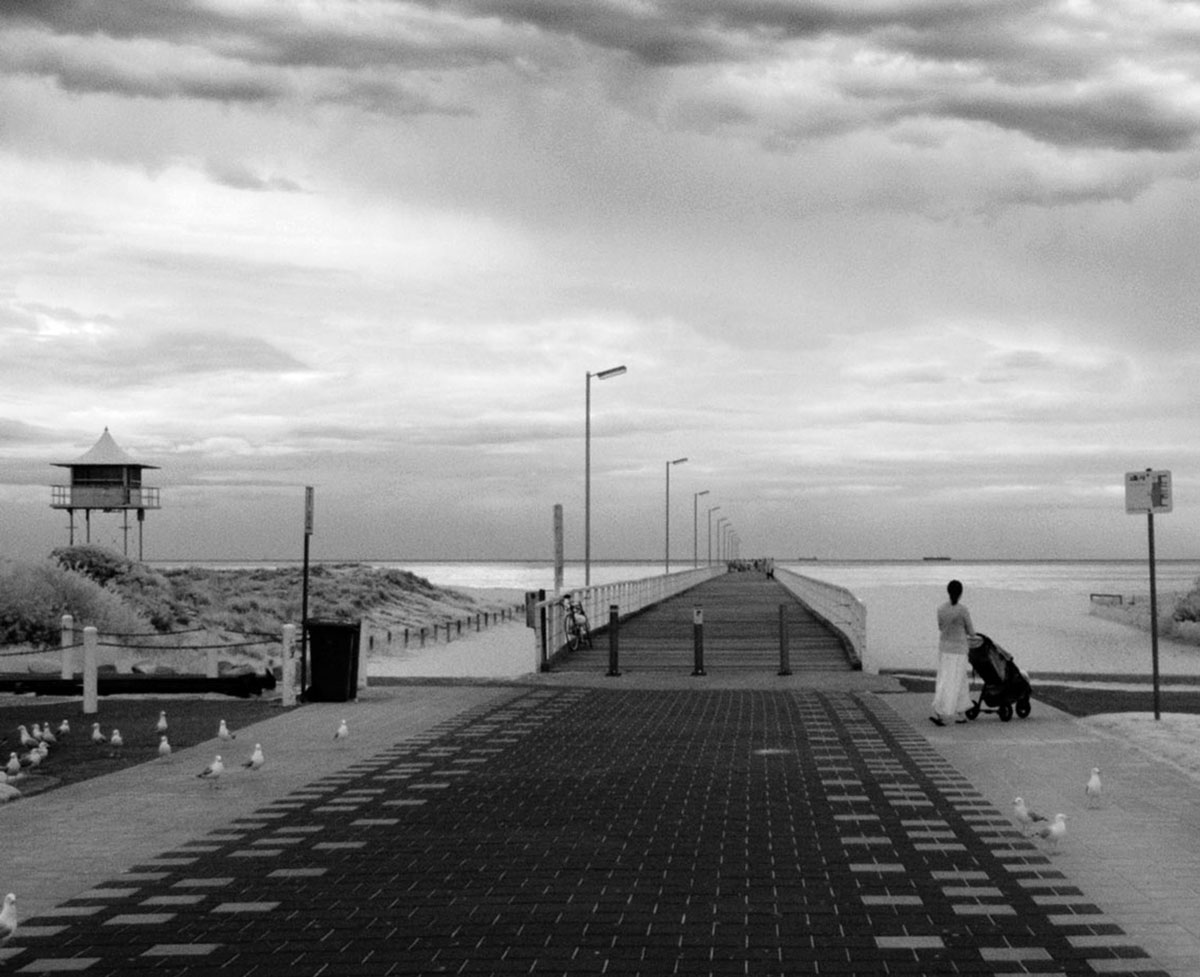 Pram, as in a Dream, Semaphore, by Alex Frayne.