It’s Halloween, and I thought about dressing as Holly Golightly in Breakfast at Tiffany’s for work in the bookshop today. But I thought it might be a bit impractical to shelve books dressed in an evening gown and pearls, brandishing a croissant, so I went for the subtle approach, and wore a shirt printed with Frankenstein and his bride, and a cardigan embroidered with a ghost.

By halfway through my shift, when no one had noticed my nod to the season, I thought to myself, If only Max was here today, he’d notice. Max is one of our regulars, and his impeccable taste in books and propensity for bringing us literary gossip is complemented by an eye for clothes (and some natty wardrobe items). 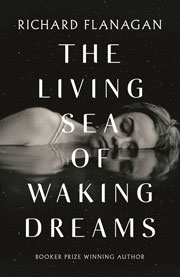 I was here a few days ago, taking photographs for our Instagram account, but I’m still amazed today by all the new books I’ve never seen before. It’s that time of year: Katherine told me during the week that they’ve been unpacking boxes all day, every day. And then there are the books I’ve been promising myself I’ll read.

Jason says the new Richard Flanagan novel, The Living Sea of Waking Dreams (Knopf, HB, $29.99), is wonderful – and it seems to take Flanagan’s fierce political edge and channel it into a dark, haunting and ultimately hopeful novel about love and loss in a world on the edge of collapse. In a world of perennial fire and growing extinctions, Anna’s aged mother is dying – if her three children would just allow it. Increasingly, she escapes thorough the hospital window into visions of horror and delight. When Anna’s finger vanishes and a few months later, her knee disappears, Anna too feels the pull of the window. And all around her, others are similarly vanishing… though no one notices. 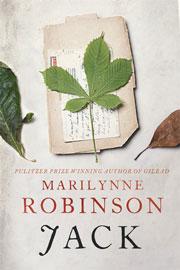 Elizabeth, a regular customer I haven’t seen in ages, comes in to give advance notice of needing a book recommendation: she’s parked her car outside and is on her way to the art gallery. She wants a Jason pick to take home when she gets back. “Just one,” she says. “And please don’t let me look at any of these other books.”

Jason calls after her, “Jack!” I’m not sure what he’s talking about, but when she returns an hour or two later, and he repeats, “Jack. Just get Jack”, I realise he’s talking about Marilynne Robinson’s fourth novel in the Gilead series.

Jack (Virago, PB, $29.99) tells the story of John Ames Boughton, the loved and grieved-over prodigal son of a Presbyterian minister in Gilead, Iowa. A drunkard and ne’er-do-well, he falls in love with Della Miles, an African-American high school teacher (also a preacher’s child) in segregated St Louis in the aftermath of World War II. 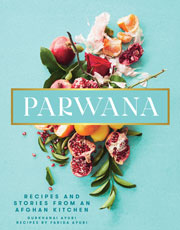 Marilynne Robinson is, of course, one of Barack Obama’s favourite writers, as well as Jason’s.

The phone rings and a programmed name flashes as I pick up the handset. It’s another regular, asking if we have the new Africola cookbook in stock yet. It’s quite the year for local Adelaide cookbooks. Parwana: Recipes and Stories from an Afghan Kitchen (by Ayubi Durkhanai, Murdoch Books, HB, RRP $45; our special price $39.99), the story and recipes of the iconic Henley Beach Road restaurant, has been flying off the shelves. 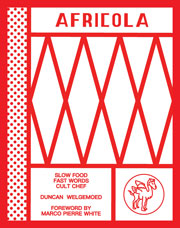 And now comes Africola: Slow Food, Fast Words, Cult Chef (Murdoch, HB, $49.99), based on the world-famous, African-inspired Adelaide restaurant, run by South African chef Duncan Welgemoed – and featuring sustainably sourced, low-impact-on-the-earth food with big, bold flavours. The book is described as, “Ottolenghi on steroids, with a sense of humour and a bit of a Kitchen Confidential vibe”. 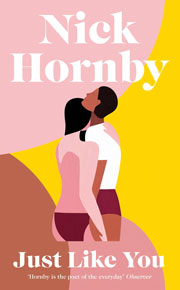 The tide of customers ebbs and flows today, as I unpack and price new books, and talk life, books and music. Maybe it’s because Jason and I swap stories about our International Record Store Day buys last weekend, or maybe it’s because I binge-watched High Fidelity (the 2019 TV version, with Zoe Kravitz replacing John Cusack as record-store owner Rob) on ABC iView the week before, but as I watch Jason move among the customers during a busy period, the store humming with recommendations and banter, I think about a similar scene from that series/film/book. A Saturday afternoon buzz of perfect harmony and great conversations, all centred on a shared love – in High Fidelity, of records; here today at Imprints on this 2020 Halloween afternoon, as customers dutifully apply hand sanitiser, of books.

There’s a new Nick Hornby novel, too. Just Like You (Viking, PB, $32.99) reverses the infamous High Fidelity quote: “What really matters is what you like, not what you are like”.

In this novel, two seemingly mismatched polar opposites – a working-class black man in his 20s who coaches football and dreams of becoming a DJ and a 42-year-old white single mother, a Head of English – improbably fall in love. And the novel, while exploring issues of race and class through its central romance, gets to the heart of what it means to fall surprisingly and headlong in love with someone who is not just like you at all. 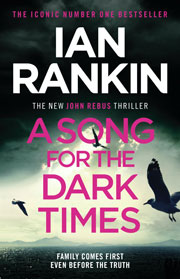 The phone rings again, and after we exchange hellos, the voice says, “Do you know who this is?” and I pause, wondering, before it clicks. “Oui,” I say. “Hello, Monsieur.”

And then my high school French teacher laughs… kind of… wearily. “If you don’t watch out, I’ll actually start speaking French to you,” he says, and I promise to stop. He’s just read a new Inspector Rebus novel by Ian Rankin, which he thought Rankin had stopped writing ages ago, and he’s wondering if we have other Rebus novels he hasn’t read on the shelves. He tells me that this one is terrific.

If you’re a Rankin or Rebus fan (or both), you should probably know that A Song For the Dark Times (Ian Rankin, Orion, $32.99) was published last month. When his daughter Samantha calls in the dead of night, John Rebus knows it’s not good news. Her husband has been missing for two days. Rebus fears the worst – and knows from his lifetime in the police that his daughter will be the prime suspect. I would give this one to my grandmother for her birthday this week… but I think Mum already got it for her. 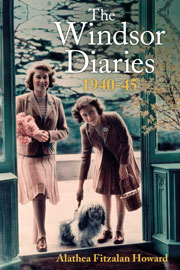 Instead, I think I will gift Nana The Windsor Diaries 1940­–45 (Hodder, $34.95), the never-before-seen diaries of Alathea Fitzalan Howard, who lived alongside the young Princesses Elizabeth and Margaret at Windsor Castle during World War II. Just in time to be a perfect companion read to the new series of The Crown!

And then, towards the end of my shift, Max comes in. He’s looking for a pair of hardback second-hand classics from our Instagram stories. Though I run our main Instagram account, most days Jason pops up a plum second-hand find on our Instagram stories. And most of the time, someone buys whatever it is as a result. We talk for a while, between customers and book pricing, about what Max is reading and the books he’s collected, and where to buy good second-hand bookshelves. And then he says, “I like your Halloween clothes”, and I practically leap over the counter. “I KNEW IT!” I yell, and then explain my morning’s prediction. “Oh, sorry, I didn’t notice,” says Jason, looking at my shirt.

And then, with Halloween on my mind again, I finish my day by making a themed Instagram post, featuring a stack of spooky books, including the Richard Flanagan. And there’s a fat new hardcover called The History of Magic (Chris Gosden, $49.99) that explores the role of magic in human societies, from the Ice Age to now. The Haunting of Alma Fielding (Kate Summerscale, Bloomsbury, $29.99), a literary true ghost story set in 1938, involving real-world trauma manifested as a supernatural haunting, lovingly endorsed by Sarah Waters. The latest Ottessa Moshfegh, Death in Her Hands (Jonathan Cape $29.99), a metaphysical suspense that follows a woman who finds a note about a dead body in the woods, and falls into obsession. And Bob Woodward’s intimate, revelatory, headline-making, possibly election-influencing book on Trump: Rage (Simon & Schuster, HB, $49.99). Even though it’s not really funny, it makes me laugh to see it in the pile.