Affirm has described The Dictionary of Lost Words, which was first published in April and has been reprinted numerous times since, as “a lockdown sensation”.

The 58,000 sales so far are almost entirely in Australia, and novel currently occupies sixth spot in the list of top 10 fiction books in Australia compiled by Nielsen Book. 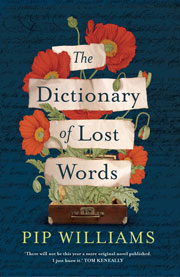 Williams was inspired by the “women’s words” which were neglected or discarded by the men who created the first Oxford English Dictionary in the late 19th and early 20th century, with her engaging story centred on a curious girl called Esme who grows up in the Scriptorium where the dictionary words are being defined.

According to Nielsen Book and publisher HarperCollins, Boy Swallows Universe sold more than 200,000 print copies in Australia in 72 weeks.

Despite being released in the middle of the pandemic, Williams’ book is on track to sell just as well, according to Affirm. It will be published in a second format in Australia this Christmas before having its major US and UK release in April 2021, with rights sold to eight international territories.

Hughes said Affirm Press was “immensely excited” to be working with the Adelaide author again on her second novel, The Bookbinder of Jericho.

The new novel will be set in early 20th-century Oxford, where “cracks appear in the normal order of things” when World War I is declared. Exploring censorship and access to knowledge and opportunity, The Bookbinder of Jericho tells the story of that change from the perspective of a young woman, Peggy, who works in the bindery of the Oxford University Press.

“The Bookbinder of Jericho was born in the archives of the Oxford University Press while I was doing research for The Dictionary of Lost Words,” Williams said in a statement.

“It has waited patiently to be written, but now the characters are my constant companions. I’m enjoying their journey as much as I enjoyed Esme’s.”

Read InDaily’s interview with Pip Williams about The Dictionary of Lost Words here.