As a bookseller, my job is generally to find books that will mean something to someone else.

A perfect book for someone to unwind with on holiday, the just-right gift for a dad who’s politics mad, a novel for a teen daughter who loved Harry Potter … but last week, I was asked to think about the books that have meant something to me, as a guest on Peter Goers’ Shelfie segment on ABC Adelaide.

And once I started thinking about it, I couldn’t stop. I won’t bore you with the enormous stack of books I assembled, but here are just a few.

Janette Turner Hospital’s dark, dreamy literary mystery novel The Last Magician (UQP, 1991) was assigned reading for the Australian Literature elective that was the one subject I really enjoyed during my short-lived primary teaching degree. 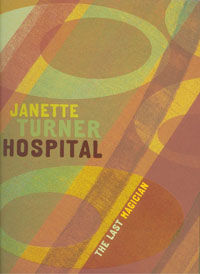 At the time, I was paying the rent on my first share-house by working for SA Book Place, a long-defunct bookshop chain that was the John Martin’s book department, and had its own shops in Rundle Mall, the Myer Centre and Tea Tree Plaza. I thought of us as a downmarket Angus & Robertson – a place where it was unusual for staff members to read from the “Quality Fiction” shelf, which stocked books like the Turner Hospital and Tim Winton (the Fiction shelf was packed with Bryce Courtenay and Colleen McCullough).

I was drawn to Quality Fiction, but didn’t really know where to start, beyond the cheap Wordsworth Classics I started collecting, and the gothic horror novels of Poppy Z Brite, which I thought very sophisticated. The Last Magician is the first literary novel I felt like I discovered for myself (even though it was assigned for uni). I don’t think I ever finished the essay I was assigned to write on it, but I read the book over and over, discovering new clues to its contents each time.

It’s narrated by clever, wry Lucy, who glimpses a messier, more authentic world than the one she inhabits after a confrontation at a train station sparks an unlikely affinity with fringe dwellers. As a barmaid, she acts as a bridge between the polite surface world she was bred to inhabit and the underclass. She falls in love with Gabriel, an angelic-looking law dropout researching the dark side of the law, making corrupt Queenslanders (and his father, a judge) very nervous.

In Sydney, Lucy befriends fellow Queenslander Charlie, manager of the restaurant/brothel she works at. An art photographer in his spare time, Charlie uses his work to interrogate a childhood tragedy that also involves Gabriel’s estranged father, where four children witnessed the death of a fifth.

Charlie’s photographs, he says, are a way to “see what he has seen”. Out of them, he makes intricate collages and short films: rich thematic mosaics. As with Siri Hustvedt’s masterpiece What I Loved, these imaginary works of art are part of the fabric of the book and encode clues as to its central mystery.

Reading this novel is an exercise in actively piecing a story together, in recognising patterns and making sense of them, in a kind of partnership with the protagonists. It was my introduction to this kind of reading and I loved it. I just re-read The Last Magician on the heels of re-watching Twin Peaks, which I discovered at the same age, and they share an immersive, psychologically rich enchantment. 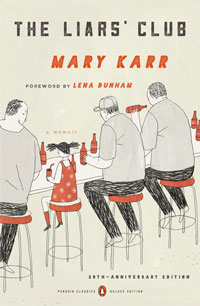 I’m not sure when I discovered Mary Karr’s brilliant memoir of her dysfunctional childhood, The Liar’s Club (Penguin, 1995) – my gold-standard for memoir writing – or her second and third memoirs, Cherry (about her adolescent years) and Lit (about becoming a writer, overcoming alcoholism and trauma, and finding faith). I think it might have been around the time I started writing my own memoir (since published) and went looking for examples.

I do know that when I teach memoir, I always cite Mary’s books, and her advice. For instance, she advises against writing what she calls an “ass-whipping memoir” (better known as the “misery memoir”) and in favour of nuance, including attempting to consider the perspectives and circumstances of other players in your personal drama, and being fiercely faithful to the truth of your story.

In The Liar’s Club, Mary writes about growing up in a dysfunctional family in a polluted, swampy Texas oil town. She calls it “a love letter to my less-than-perfect family”.

Her father was a staunchly union oil worker who grew up poor and was a natural storyteller – the title comes from the nickname given to his group of friends, who’d regularly drink and exchange stories. Her mother was an eccentric artist, clever and bookish, who had married seven times (twice to Mary’s father), shot at two of her husbands, and was officially designated “nervous”.

The Liar’s Club opens with a dreamlike memory of an incident, later remembered in more clarity, when Karr’s mother had burned all kinds of household items in a bonfire in the backyard, brandished a knife, then called the police and told them she’d stabbed her daughters to death (she hadn’t touched them). And yet, despite the dramatic content, the book is equally concerned with ordinary domestic detail, and it’s often wryly funny.

“When fortune hands you such characters, why would you bother to make things up?” she writes. Indeed.

Helen Garner is another gold-standard writer for me – and I found it hard to nail down one book as most meaningful. 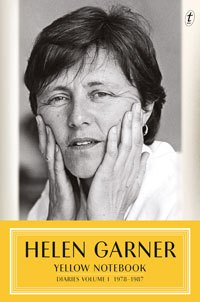 If I had to choose her best book, in my opinion, it would probably be Joe Cinque’s Consolation, her second exercise in true crime, in which she immerses herself in the story of a mentally unstable Canberra university student, Anu Singh, who killed her boyfriend Joe Cinque by injecting him with a lethal heroin overdose as he slept – and the friend who enabled her, by helping her source the heroin and to organise the dinner party at which all the guests except Joe knew it was meant to be a farewell party, and that Singh planned to kill him and herself afterwards.

Garner tries to remain objective, as she attends the court case and reaches out to the involved parties, but finds herself drawn into a deep friendship with Maria Cinque, Joe’s mother, which of course influences the narrative.

In Garner’s courtroom books (also This House of Grief, her devastating and excellent book on the investigation into Robert Farquharson, who killed his children by driving them into a dam on Father’s Day), she pays forensic attention to the human and psychological detail of the cases, and how the law and justice (two separate and often contrasting concepts) are served in the courtroom, in ways that illuminate truths about what it is to be human, here and now.

In my conversation with Peter Goers, he agreed that Garner’s a fine writer of non-fiction, but was unimpressed by her publication of her diaries – he scoffed at the ordinary domestic detail in them. But I was moved and inspired by Yellow Notebook, the first volume of Garner’s diaries, published last year – and eagerly look forward to the next instalment, promised this November. When I read them over the summer, I recorded quotes that especially resonated with me: some of them because they felt familiar, others because I liked the observations, or wanted to think about them further.

About a month ago, scrolling through the mass of untitled fragments on my phone’s Notes application, I came across one that started: If I write what I want to, about the people I know at home, I’ll never be able to live in Melbourne again. And I thought, “When did I write that?” It wasn’t until I read a few fragments down that I realised it wasn’t my own thought, but one of the quotes I identified with from Yellow Notebook. And here’s one I just liked to think about: Sentimentality keeps looking over its shoulder to see how you’re taking it. Emotion doesn’t give a shit whether anyone’s looking or not.

As a bookseller, reader, writer and editor, of course my list of books that have meant something to me is ridiculously long. So here are a few more, quickly:

Easy Riders, Raging Bulls: How the Sex, Drugs and Rock’n’Roll Generation Saved Hollywood, by Peter Biskind: This deliciously gossipy, film-literate insider’s look at the 1970s Hollywood film scene, by former Vanity Fair journalist Biskind, gave me a lifelong taste for great entertainment writing (building on a childhood fascination with golden-age Hollywood biographies) and inspired me to watch the films in it. It’s one of the most FUN books I ever read, though a summer re-read reminded me of the endemic misogyny revealed in it, including one director (William Friedkin) who savagely psychologically tortured his fiancée and another (Dennis Hopper) who had a propensity for beating his wives half to death.

All I Ever Wanted by Vikki Wakefield: Vikki Wakefield’s debut novel, set in outer-suburban Adelaide and starring a protagonist who badly wants to escape her environment, but gets embroiled in a plan that might instead draw her further in, reads like a cross between Hating Alison Ashley and Underbelly. It is sardonically funny, heartbreaking and engrossing. After a long time of not reading YA – seeing it as writing for kids – this book made me realise the riches I was ignoring, and I’ve made many more welcome discoveries since.

Diary of a Bookseller: Writers, readers and lovers

Random Family by Adrian Nicole LeBlanc: I’m sorry, I think this is out of print – but I can’t not include it. This addictively immersive work of narrative journalism follows an extended family in the Bronx over a decade, and charts the experience of poverty on an intimate, everyday level through brilliantly drawn characters, showing how generational cycles are perpetuated. If you were a fan of The Wire, this book would be for you. It got me hooked on narrative journalism, and led to other books like Katherine Boo’s Behind the Beautiful Forevers (on slums in Mumbai) and Matthew Desmond’s Pulitzer prize-winning Evicted: Poverty and Profit in the American City.