There is a genre of novel that I have relied upon for many years. Some people call it “airport fiction”, or “beach reading”. The name implies a reassuring effort-to-pleasure ratio. It includes young adult novels about teenage girls kicking arse in post-apocalyptic dystopias, low-stakes relationship dramas and action-thrillers full of weapon specifications.

These are the books I turn to when my emotional capacity is near nil. When I am exhausted by life, by working and parenting and waiting on hold and all the other activities that make me feel as wilted as a wet sock.

It’s a pleasure to curl up with a cup of tea and a novel of escapist silliness. For a few hours I’m distracted and entertained. But lately I have been worse than wilted. Fear and uncertainty have become a constant background sensation. Grief and despair flow in and out of my consciousness like a grim tide.

I don’t need mere distraction. I need real, potent pleasure to offset the horrible news of the day. I lack the resilience to cope with the minor irritants of poor prose style and shoddy plot holes that so often come with the “light read” genre.

What I need is something that will demand nothing of me, but which is, in every other respect, absolutely perfect. And so I pick up PG Wodehouse.

Contrived plots, two-dimensional characters, ridiculous resolutions: check. Yet the master of comic novels takes all of those elements and spins them into shining gold. Wodehouse is what to read when anything less than the utterly sublime is too much to bear.

Wodehouse wrote 71 novels. For those new to him, I recommend you start with Right Ho, Jeeves. It is a delight.

His contrived plots are contrived so artfully that they seem as natural as birdsong. Misplaced antiques and mistaken betrothals weave around one another like Bach’s counterpoints, complex yet perfectly balanced, resolving harmoniously into a neat final chord that makes you sigh with satisfaction.

Characters that in lesser hands would be caricatures become some of the sharpest and funniest fictional persons ever created. Aunt Dahlia, Bobbie Wickham, Psmith (“the P is silent”), Jeeves and Wooster, and Lord Emsworth are my favourites.

A way with words

It is customary, when praising Wodehouse, to include some quotes that illustrate his unparalleled deftness with the English language.

Anyone who loves Wodehouse knows the impossibility of choosing, but this one seems appropriate for those finding solace in small things today: 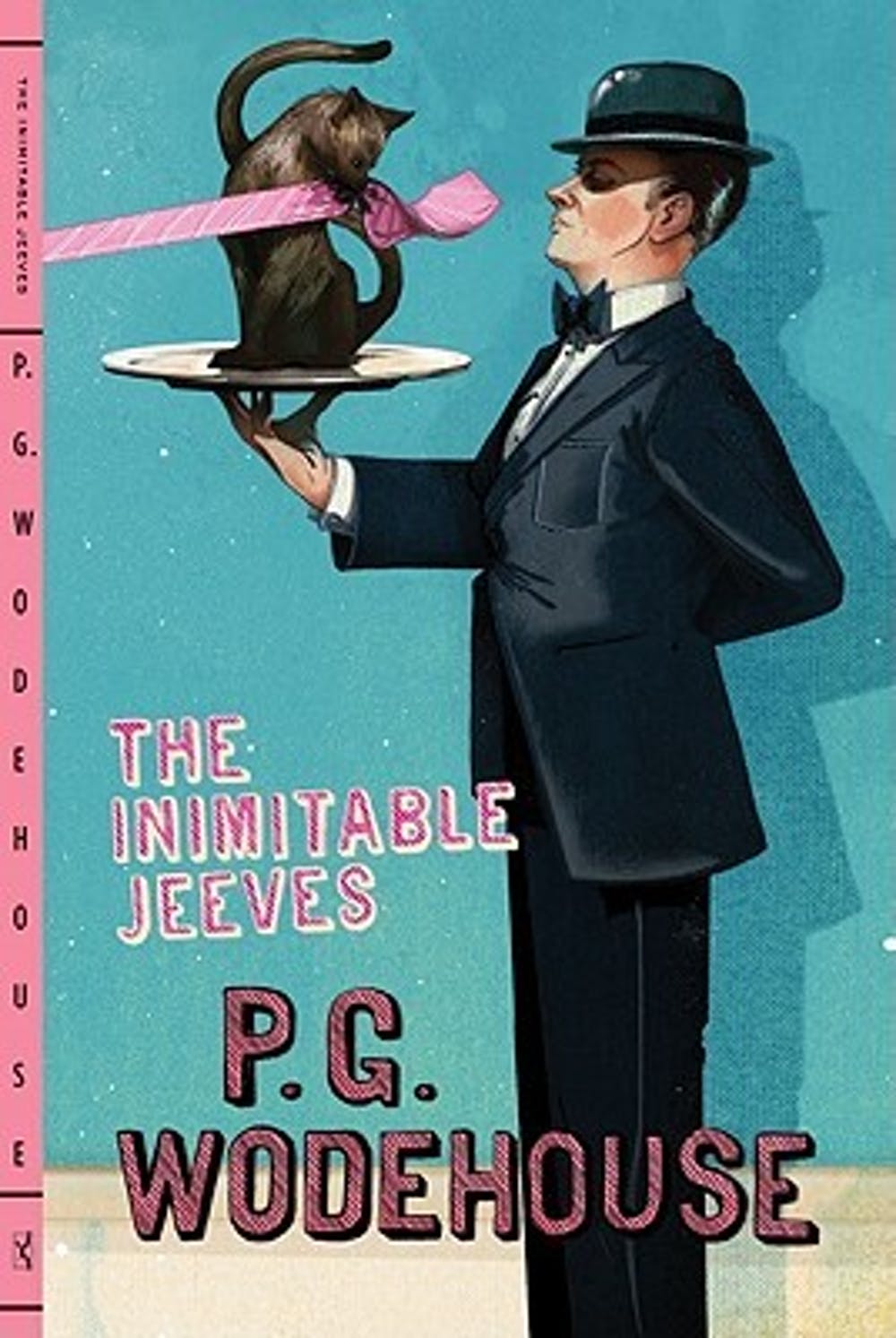 The discovery of a toy duck in the soap dish, presumably the property of some former juvenile visitor, contributed not a little to this new and happier frame of mind. What with one thing and another, I hadn’t played with toy ducks in my bath for years, and I found the novel experience most invigorating. For the benefit of those interested, I may mention that if you shove the thing under the surface with the sponge and then let it go, it shoots out of the water in a manner calculated to divert the most careworn. Ten minutes of this and I was enabled to return to the bedchamber much more the old merry Bertram.

Wodehouse’s words are as pristine as poetry. His similes delight me:

She looked like an aunt who had just bitten into a bad oyster.

He sprung round with a sort of guilty bound, like an adagio dancer surprised while watering the cat’s milk.

He looked like a sheep with a secret sorrow.

Wodehouse and Jane Austen are my go-to writers when I need the balm of perfect prose style. But while few have accused Austen’s novels of being too grim, the stakes are often real: enough money to live on, a happy marriage. Even the trials of Marianne Dashwood are enough to send me into a slump these days. By contrast, the stakes in Wodehouse couldn’t even make my four-year-old cry, and she cries when Sean the Sheep loses his farmer.

Bertie’s millionaire Uncle has lost his favourite milk jug. A houseguest at Blandings Castle has been throwing eggs at the gardener. These are high dramas I can invest in, safe in the knowledge that the milk jug will be found, the errant houseguest thwarted—and none of it really matters anyway.

An Illustration from Jeeves in the Springtime. Photo: Wikimedia Commons

‘A musical comedy without music’

This was quite intentional on Wodehouse’s part, as he famously said:

I believe there are only two ways of writing a novel… one is mine, making the thing a sort of musical comedy without music and ignoring real life altogether; the other is going right down deep into life, and not caring a damn.

Wodehouse wrote at a time when his contemporaries —James Joyce, Virginia Woolf, DH Lawrence, Aldous Huxley — were forging Great Works of Literature. I love those books, and the ways they go “right down deep into life”.

I suspect Wodehouse could have written such novels with the best of them. But I’m so grateful he knew that the human soul also needs simple joy. His books lead me beside quiet waters, and restore my soul.

And I will never not giggle when Bertie Wooster, offended to the core, takes his leave of his cousin Angela:

‘Very good,’ I said coldly. ‘In that case, tinkerty tonk.’

And I meant it to sting.

Carly Osborn is a Visiting Research Fellow at the University of Adelaide. This article is republished from The Conversation under a Creative Commons licence. It is part from an Art for Trying Times series in which authors nominate a work they turn to for solace or perspective during this pandemic.