As a child, archaeologist Susan Arthure climbed castles as playgrounds ­– “because there were no playgrounds”.  Her childhood town of Trim, in County Meath, 50 kilometres from Dublin, was a very small place then, but rich in ruins and history.

Each summer American tourists, in search of their ancestors, would come looking among the gravestones where Susan and her friends were playing. Family names persisted, and the youngsters were happy to suggest connections and clues. Sometimes, though, a name rang no bells. If the Americans looked sad, just occasionally the children made up a family story to cheer the visitors on their way.

These days, of course, people in vast numbers do their searchings online. Trove, that extraordinary free repository that “brings together billions of pieces of information”, must be overloaded these stay-at-home nights. Keyboards tinkling across this wide land, with the odd sigh of despair when that precious nugget of news turns out to be fool’s gold.

Susan Arthure’s recent tale of discovery commenced not at a computer but in the open country air. “The story,” she writes, “began in November 2012 when I walked for the first time on Baker’s Flat near Kapunda, about an hour’s drive north of Adelaide. I was an Irish-Australian archaeologist in search of an Irish colonial settlement.”

Since then, digging at Baker’s Flat for facts and artefacts, Susan and team have unearthed the vestiges of a “clachan”, a form of traditional Irish settlement that was already dying out in Ireland when the community’s first inhabitants arrived in South Australia. “Significantly,” she writes, “the only other clachan outside of Ireland to be hinted at so far is a cluster of houses built by 19th-century Irish migrants on Beaver Island, Lake Michigan”.

Susan’s work has attracted publicity along the way, for instance in this recent article for The Conversation shared by InDaily. She is still putting the clachan jigsaw pieces together – literally, as shown in this post on her blog Don’t forget your shovel. 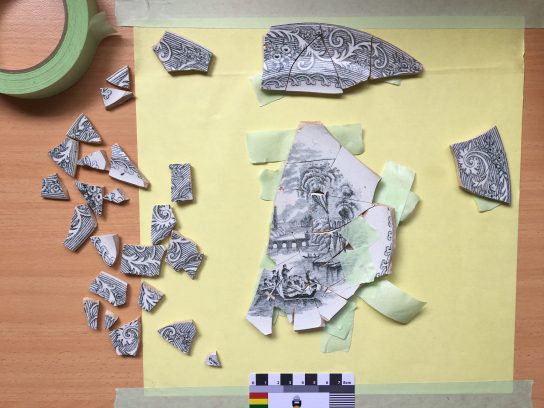 Jigsaw of the ceramic variety: a photo from Susan Arthure’s blog, showing her efforts to reassemble fragments found during excavations at Baker’s Flat.

The Irish presence in South Australia has long been an overlooked piece in the state’s puzzling history. That’s partly why Susan Arthure and three co-editors decided to put together our recent book of essays Irish South Australia: New histories and insights. As one of the editors, Stephanie James, never forgets to remind me, our Wakefield Companion to South Australian History has no separate entry under “Irish” (promise there will be in a new, revised edition, when we can afford a new edition!).

Irish South Australia has succeeded well beyond expectation, as did the massive happy launching at the Irish Club in Carrington Street, which I see has just reopened its doors.

The book launch was last year on St Brigid’s Day. Ignorant I had thought the editors said St Patrick’s Day, which is six weeks later. There was, hmm, a hell of a rush to ensure the book arrived on time. 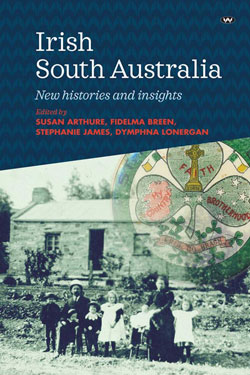 Susan Arthure’s essay in the book, “Kapunda’s Irish Connections”, tells a nuanced history demonstrating that Irishness in SA’s colonial times was complex, with class and religious barriers between “the elite Protestant Anglo-Irish, the middle-class Irish Catholics, and the poorest of Ireland’s emigrants” at times overcome by tacit ethnic solidarity.

Just last week, Susan’s piece was awarded the annual best history essay prize given by the History Council of South Australia, a non-government “peak body, providing a representative voice on historical issues, celebrating and raising the profile of history in the state” (their newsletter is a must). We help sponsor the council’s various awards with book vouchers but, swear to the gods, we had no part in judging the essay award.

Anyway, we hosted at Wakefield Press a small, COVID-dictated ceremony to celebrate Susan’s win. Keith Conlon, chair of the South Australian Heritage Council, among his many guises, and History Council president Dr Skye Krichauff – both sometime Wakefield authors – did the talking honours, while digital history maestro Dr Kristy Kokegei, of both the History Council and the State Government’s History Trust, did the phone-filming for Facebook Live and the photo-snapping. Susan’s passion for her subject shone brilliantly as she responded to Keith’s interview questions and took over the stage.

Afterward we did what we’ve all been missing for a while – sat round a table and chewed the fat. We learnt that, yes, Keith Conlon does have Irish South Australian heritage. We relished Susan’s stories of how, when landowners sought to claim Baker’s Flat (which was occupied for nearly a century by the Irish), the women would come out to fight, greeting the invaders with “threats loud and strong, armed with sticks and stones”.

I called Susan later with a few questions. For her, she said, “It’s all about finding things. It’s all about people.” Her brief biography shows what seems the logical, orderly progression of a curious, compassionate, purposeful soul to her work and passion now.

She qualified and worked in social welfare, “helping people learn how to negotiate with landlords, or electricity suppliers”, for instance. She graduated next in library studies (aka information management). ”I’m a very good organiser. Good at processes.”

So good, in fact, that earlier this century SA Health tasked her with “developing the information architecture, metadata requirements and search requirements for the new all-of-Health internet and intranet sites”.  Then, less than a decade ago, Susan was internet strategy manager for the state’s Department of Environment, Water and Natural Resources, providing strategic leadership for the development of the department’s websites in ever-changing times.

Then, still putting pieces and people together, archaeology, history and Baker’s Flat enraptured her. 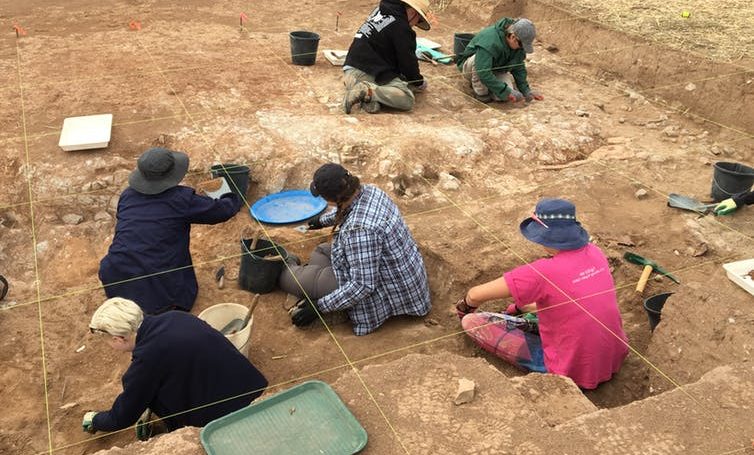 Uncovering the past at Baker’s Flat. Photo: Susan Arthure

Having grown up as a boy vaguely aware of “Ireland”, figuring it was part of “Britain” (like it was legally in the 19th and early 20th centuries), I risked a dumb question. “Did you learn Irish when you were a child?”

“Yes, until the last hour of the last day at school.” But earlier generations hadn’t been allowed the language.

And how did you feel, how did people feel, toward England?

“Ah, now that’s a very complicated question,” she says. “Ireland was England’s first colony. England was the colonising power. There was never, in say the 19th century, the sort of reciprocity between landholder and tenant as there was in England. But people went to England to get work.  They survived because of England. Even now, Irish people know a lot about English history and English politics, but it’s not reciprocated.”

So, the South Australian newspapers, aping their English models, reported the Irish poor in the Baker’s Flat clachan almost as savages, and as stupid figures of fun They didn’t recognise the communal, well-ordered ways of life with different rituals and pleasures.

Susan Arthure’s tales of non-reciprocal relations, power imbalances and wilful or plain misunderstandings makes me think inevitably of writings on “European”-Aboriginal history that authors including the aforementioned Skye Krichauff have contributed to essay collections we have published recently, such as Peggy Brock’s and Tom Gara’s Colonialism and its Aftermath and Gillian Dooley’s and Danielle Clode’s The First Wave.

At our small soiree for Susan’s award, some chat had been about how Germans, before Irish most likely, had been among Kapunda’s early mineworkers. “Always the Germans – they were the respectable ones,” Susan muttered with a smile. If Skye Krichauff heard, I’m sure she wasn’t offended, even though she still dwells on the Bugle Ranges property her ancestor Friedrich Edouard Heinrich Wulf Krichauff acquired in 1849 weeks after he came to South Australia from tumultuous Germany.

Skye’s research – and social-political – interests include investigating “the absence of Aboriginal people in the historical consciousness of settler descendants”. I hear whispers there may be big projects afoot in our state soon on that score, involving many people and organisations. But I won’t repeat rumours. No furphies.