You’d like to think we’re coming in out of the cold, but it’s hardly the appropriate expression, with this freezing weather that’s come too soon.

Still, things are warming up in the book trade, locally at least, with outlets reopening to browsers and cautiously placing new orders.

But there’s the rest of the world. You can hardly talk about a normal book industry when (for instance), in the US, the print-on-demand giant we use to supply outlets there advised publishers in early May to now expect 22 days’ turnaround printing time for paperback single copies. A week before it was 10–12 days, and a week before that five to seven days (up from the normal three).

Still, it’s difficult to call this situation a “new normal”, given it was only a few short years ago that it became affordable for publishers to print and swiftly supply outlets world-over with paperbacks “on demand”.

It hasn’t been a great time for book sales

The book industry is a huge protean beast, forever snapping back when its demise is proclaimed. (Privately I’m convinced that the regular “Death of the Book” rumours are started by wishful-thinking accountants and liquidators who as boys — yep, generally boys — were forced to read books at school and hated it. Not sure that I’m a fan of the forced-reading brigade.)

It’s pleasing to think that even we at little Wakefield Press — in sometimes sunny, almost COVID-free Adelaide, city in a desert — supply locked-down readers in New York and London with books they stumble across on the net or get told about by distant friends. 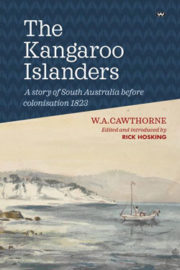 By the way, what will the words “Adelaide” and “South Australia” come to signify in the “new normal” book market, given how lucky and/or well-governed we’ve been in the pandemic (touch wood, don’t say it out loud, remember pride comes before a fall).

Secretly and shamefully, but from bitter experience, I have often advised authors and editors to keep those words off the cover or blurb for their books, if they think the book has a wider market beyond our borders. You know the reasons why — but maybe there’s a change coming.

Orders have been coming thick and fast from all over for Rick Hosking’s edited, introduced and informatively annotated edition of WA Cawthorne’s c19 (that’s 19th-century, not the virus) novel The Kangaroo Islanders. We printed short because the trade was so quiet. Now we’re reprinting in a big hurry.

Anyway, in case you’re asking, or assuming from what you’ve read somewhere (never believe what you read, though I guess I shouldn’t say that), it hasn’t been a great time for book sales, in the main.

Sure, people have been reading more, but mainly whatever they have beside their bed and have always meant to read one day. You’ll know people who’ve found the whole isolating, home-working gig enervating, so they are unable to focus when they try to read books.

But hope springs eternal, and correctly so. I’m assuming it won’t be winter forever, despite its head-start.