It seems somehow appropriate, in this hyper-local moment, that 2020 is a bumper year for adult fiction by Adelaide authors.

In March, we had Anna Goldsworthy’s gorgeous Melting Moments (Black Inc), set in Adelaide from 1941 to the cusp of the 21st century, told through the dry-witted, socially observant perspective of Ruby, a country girl turned city typist, turned wife and mother, as she lives through a rapidly modernising world.

And Annette Marner’s A New Name for the Colour Blue (Wakefield Press), a literary mystery that dives deep into how a woman might find herself entangled with a violent man, family rifts that echo through the decades, and black-white relations in country towns, with exquisite descriptions of the Flinders Ranges.

Last month, Adelaide Hills author Pip Williams burst onto the national bestseller lists with the delightfully absorbing The Dictionary of Lost Words (Affirm Press): plucky, unconventional heroine Esme works on the Oxford English Dictionary with her father, but assembles her own rogue dictionary on the side, including words that reflect the intimate lives of women and the working-class. 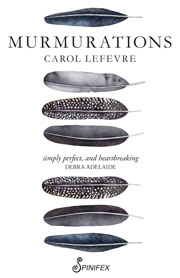 Carol Lefevre is a beautiful writer with a dedicated following. Her novella Murmurations (Spinifex, April) – also on my to-read pile – comes with rave endorsements from Debra Adelaide and Michelle De Kretser, who writes: “With beautiful, clear-eyed insight, Murmurations charts lives edging towards revelation or despair. The women at the heart of these stories have the poise and mystery of figures in paintings. We’re drawn into intimacy with them through the grace of Carol Lefevre’s benevolent vision and quietly assured prose.” Erris Cleary’s absence haunts the pages of this exquisite novella; she is a woman who complicates other lives yet confers unexpected blessings.

And there was Sonya Bates’ debut mystery set between the present and a family’s wartime past, Inheritance of Secrets (HarperCollins), exploring the secrets of a German soldier who emigrated to Australia to start a new life, and how, decades later, they will endanger the lives of his grandchildren.

I should also mention Thrill Me (Glimmer Press, April), an anthology edited by Adelaide publisher-editor Lynette Washington that includes several fine Adelaide authors, including the Miles Franklin-longlisted Stephen Orr, Imprints’ own writer and critic Ben Brooker and Rachael Mead. The stories in here are thrillers of all kinds, chosen to provoke, shock and move the reader. 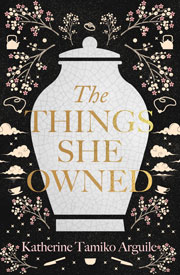 Katherine Tamiko Arguile’s The Things She Owned (Affirm Press, May), another debut novel, is the latest book by an Adelaide author to hit the shelves at Imprints – and it’s a book we’ve been recommending far and wide. I’m reading it now, and fascinated by the world of Erika, a London chef who lives surrounded by the things once owned by her cruel and complicated long-dead mother, Michiko, who grew up in wartime Tokyo amid starvation and avid want. The two lives – Erika’s in the present and Michiko’s in the past – unfurl side by side, as we learn about what shaped them both, through the stories told by Michiko’s possessions.

My colleagues Katherine and Megan both adored The Things She Owned, which is richly woven with historical details of Tokyo and the island of Okinawa, where Michiko’s mother was from – and with detailed descriptions of Japanese food. Megan says: “Anyone with an interest in Japan will find this book a delight. And despite the pain that runs through Erika and Michiko’s stories, it is uplifting to see characters learn to work through difficult relationships with patience and open, curious minds.”

Next week comes the third work of Adelaide fiction this year from Affirm Press, which started its Adelaide streak in 2017 when it published Rebekah Clarkson’s affecting, sharply observed, often humorous linked story collection set in Mount Barker, Barking Dogs (compared in reviews to Tim Winton and Josephine Rowe). It’s worth noting that Clarkson has mentored or worked with all three of the writers published by Affirm this year. 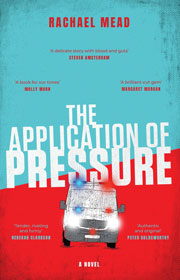 Rachael Mead’s The Application of Pressure (Affirm Press, May) is a blackly funny, surprisingly moving novel in stories that follows the lives and careers of Adelaide paramedics Tash and Joel, from their early training days, to decades later, when they’re close enough to retirement to start dreaming about it. With the rare exception (including a memorable story at an Adelaide Zoo trivia night), every story centres on an accident or emergency. The incidents range from the disgusting (warning – don’t read this while you’re eating) and the macabre to the deeply affecting, and each illuminates the human lives behind it as much as the (fascinating) mechanics of working as a paramedic, and the mental and physical toll the job can take. As we move through the decades, we watch Tash and Joel and their relationships evolve, and grow to love them as characters, and empathise with their ups and downs. This book will appeal to those who are fascinated with the realities of hospitals and ER, as well as readers who want a good story to settle down with. 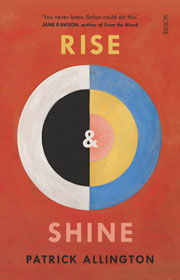 I’ve long been a fan of Patrick Allington, whose very fine first novel, Figurehead (Black Inc), whose characters included an Australian journalist in Cambodia and Pol Pot, was longlisted for the Miles Franklin (and had him compared to Milan Kundera). And so I am impatient to read his long-awaited second novel, Rise and Shine (Scribe, June), which has just landed on my doorstep. A dystopian tale for our troubled times, it’s set in a world perpetually at war, where the war itself is what sustains those who remain. Eight billion have perished, and the survivors live in the city-states of Rise and Shine. Far from representing their doom, this war is their means of survival. For their leaders have found a key to life when crops, livestock and the very future have been blighted – a key that turns on every citizen being moved by human suffering. This book has been called “a Kafkaesque fable of hope”, and has received raves from Robbie Arnott, Bram Presser and Jane Rawson.

Spine-tingling stories that reimagine the idea of a thriller

And I’d be remiss not to tell you to look out, later this year, for Emma Ashmere’s elegant, enquiring and fiercely intelligent short-story collection Dreams They Forgot (Wakefield Press, September). The stories are set all over the world, but each engage with a place, time and its inherent politics from an outsider’s perspective, from waiting for a predicted tidal wave in 1970s Adelaide as Don Dunstan decriminalises homosexuality, to an ex-soldier’s attempt to expose Maralinga during a game show.

Scheduled, too, for late 2020, is Stephen Orr’s Ern Malley novel, Yours Sincerely, Ethel Malley (Wakefield Press). It’s an inventive, inquiring shadowboxing with Australia’s most notorious literary hoax, in a novel that explores questions of authenticity, truth, faith … and storytelling itself – by an author who’s twice been longlisted for the Miles Franklin.

Jo Case is a bookseller at Imprints (107 Hindley Street) and a publisher at Wakefield Press.

Jo will talk to Adelaide authors Katherine Tamiko Arguile and Rachael Mead about their new novels in a free Zoom event for Imprints on Thursday, May 28, at 6.30pm. Booking is essential (click here to book).