“Have you ventured outside this week?” I asked Jo Case, my self-isolating colleague.

Perhaps Jo should don apiary PPE:  helmet, suit and gloves, all taped and tied. Angela Heuzenroeder did when she visited Moculta’s Rosenzweig honey farm to peer at swarming bees through the windows of their historic “Upper Silesian-designed Berlepsch-Dzierzon hives”. Angela tells the tale in her much-loved book of recipes, history and stories, Barossa Food, which to meet the times we are now releasing in a new ebook format. 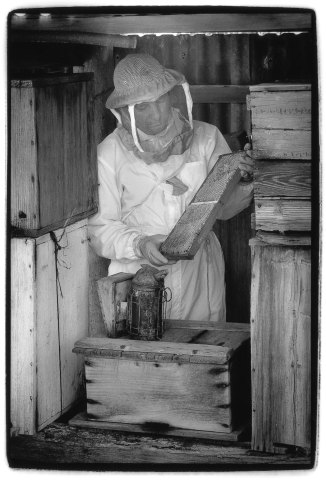 The original Lutheran congregations in the Barossa, she tells us, remained remote from “English” and secular influences, with any stray German newcomers choosing to join a congregation’s fold “rather than face social isolation”. Things changed with the generations, of course, and by the start of the 20th century “English brides” often saw to it that roast poultry and plum pudding was on the Christmas table rather than fish and poppy-seed dishes.

Then came World War I, and the British–Australian fear of an invisible, dissembling “Prussian virus” in their midst. Berliner Pfannkuchen survived as Kitchener buns, and people likewise changed their German names, lest they suffer the isolation of internment on Torrens Island, a former quarantine station.  Fortunately for history, if not for the man himself, one of the internees was a German-born photographer named Paul Dubotzki, whose captivating images form the core of Interned: Torrens Island 1914–1915, by Peter Monteath, Mandy Paul and Rebecca Martin. 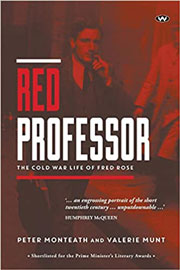 Peter Monteath and Valerie Munt have written the biography of another somewhat isolated individual in Red Professor: The Cold War Life of Fred Rose. Rose was a British-born Australian anthropologist who, disgusted by abuse of Aboriginal people, joined the Communist Party in 1942, then a decade or so later disappeared behind the Iron Curtain to East Germany, his research travels back to Australia often thwarted by the Australian government.

Closer to home, and sitting next in our shop’s shelf, is Red Silk: The Life of Elliott Johnston QC, Penelope Debelle’s biography of a fondly remembered Adelaidean who also joined the Communist Party during World War II, and later was the only open Communist to become an Australian judge. 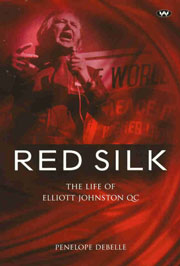 I remember sitting at the football with my small-l Liberal father and Elliott Johnston, the two legal eagles chatting and joking, he barracking for Sturt, Dad and I for Port Adelaide. I think he bought me an ice-cream, the chocolate-coated sort you unwrapped. Can’t recall its name. I remember, too, a couple of decades later selling books to his magnificent wife and fellow-Communist Elizabeth Johnston. She managed The People’s Bookshop in Angas Street, near the cop shop.

That was in the old days, when we mixed and mingled at the footy and book events. But I’ll pluck one more story on the (vaguely) isolation theme. We’ve just published a new edition of a little-known book by a well-known historian, SA-raised Jill Roe, who died a couple of years ago. The book – originally titled Beyond Belief, but we already had a book by that name – is Searching for the Spirit: Theosophy in Australia, 1879—1939. Among the many larger-than-life characters in Jill Roe’s account of this rather hidden-from-history spiritual movement is a SA- born and wed woman named Bessie Rischbieth (nee Earle: she married Henry Rischbieth of SA-German descent).

The couple moved to Perth, where Bessie through the early 20th century became a highly visible leader in child welfare, social reform and women’s movements – and, says Roe, “the most significant theosophic feminist in Australia, one who believed ‘women possess qualities that could rescue the world from chaos’.”

Bessie once stayed in Gandhi’s ashram. However, “she did not choose to lift the veil of Isis”, so that “a certain reticence” surrounds her memory, “a reflection no doubt of a formidable personal style and social distance”. She was naturally reserved but also thought of the Theosophical Society as “very much a secret society”.

I went looking in the book for a cure for Jo Case’s bee-sting-swollen foot, but found none. So I suggested ice, which along with Dettol and Panadol, is all the cures I know. She was well ahead of me already, applying cortisone cream and awaiting antihistamines – “THEY are magic” – to arrive with the next home-delivered groceries.

Jo and her team of Maddy Sexton and Poppy Nwosu are leading the way in our forays into virtual events, of which suddenly we have many. I’m getting used to Zoom, though faces on the screen do look somewhat alien, or like aliens dissembling as humans in a crappy old sci-fi movie. Rather like Max Headroom’s day has come at last. Bet A/V communications quality will improve a hundred-fold before all this is over. 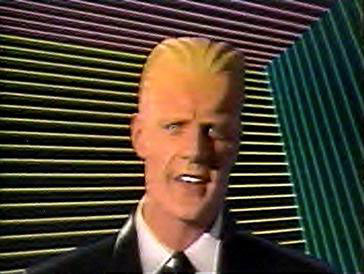