One hundred and eighty years ago today, a pair of budgerigars were taken from their native Australian shores and sailed into history.

Those little parrots became the first of their species landed live on English soil and would ignite a worldwide budgie boom.

Within decades of their introduction to the highest echelons of society by the great birdman John Gould, the little Aussie birds would become the most popular pet birds on the planet, passing from the hands of bluebloods to everyman. 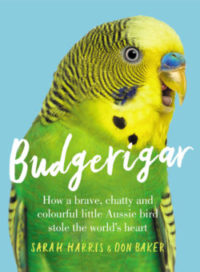 The budgie has been painted by masters, reared by royals, rendered in the finest porcelain, modelled in plastic, dipped in batter, baked in pies, bred artificially in test tubes and depicted on the postage stamps of more than 30 nations from Antigua and Barbuda to Zambia.

The pocket-size parrots were so prized the British bestowed them upon the fourteenth Dalai Lama when he was enthroned in Lhasa, Tibet, in 1940. Two pairs of budgerigars, bounced across the Himalayas in below-zero temperatures on the back of pack mules, proved far more interesting to the then four-year-old Tenzin Gyatso than the freshly minted gold bar, 10 bags of silver and other gifts that accompanied them.

The word budgerigar is one of 400 words borrowed from Aboriginal languages in the first 100 years of colonisation and became embedded in the vernacular here and abroad. A “dunny budgie” is a giant blowfly, while “budgie balls” reflects quite the opposite view of testicles, particularly those belonging to men on steroids. In World War II the word budgerigar was used to describe soldiers who frequently wrote to wives or girlfriends. If a tent had “a number of budgerigars it became an aviary” in army slang.

The birds’ tweety image has been used to sell everything: whisky, waffle syrup, laundry detergent, home loans and even cigarettes. John Player’s collectable cigarette trading cards sets included budgerigars, while a magazine ad for Old Gold features one sitting on the fingers of a hand holding a lit cigarette.

They swiftly became embedded in popular culture, arriving in earnest when a budgie called Joey was written into the BBC radio soap The Archers in 1953 and later finding roles in hit British sitcoms like Porridge, Bless this House and George and Mildred.

In America, where the birds are known as parakeets, they were no less ubiquitous and found themselves perched in the White House as pets of John F Kennedy’s children and also in the homes of such celebrities as Marilyn Monroe and Clint Eastwood. Even the Unabomber had a pet parakeet as a child.

But the pièce de résistance of marketing mojo reflected the explosion of products in the sanitary category. The tiny cotton-knit parakeet diaper or budgie nappy didn’t exactly fly out the door when it was first offered for sale in the late 1950s. It took a couple of bird-loving naval officers from Virginia, in the US, to really establish this market almost 40 years later by selling them as FlightSuits, complete with little disposable “flight liners”.

Their company, Avian Fashions, now dominates this niche, which allows birds to fly free “without sacrificing the furniture”. It has since expanded its range to include leashes, hoodies, cable-knit jumpers, bandanas, hats and dress-up costumes (including pirate, naturally) in 15 sizes, from “Petite” for budgies to “Colossal” for the largest macaws.

Whether or not you think fashion is strictly for the birds, the budgies’ lot has improved somewhat since the 19th century. Rather than giving their lives to adorn hats, as they did during the murderous millinery period, they are now being repurposed post-mortem with a rather pointed message about the expendability of wildlife in the 21st century.

Emily Valentine is a highly awarded artist who has mastered the dead budgie as a medium since winning the World of WearableArt (WOW) design competition “bizarre bra” category in 2002.

“I used to do fashion jewellery and I had been doing a lot using feathers, but the bra was my first piece of taxidermied wearable art,” Valentine recalls. The budgerigar brassiere came about as a result of a small domestic tragedy and became a means to celebrate Valentine’s dead pets Rocky and Rolly.

“It was the classic story. I went away on holiday and left my birds with my friend and my friend forgot to bring them inside one afternoon, so they were both dead in the morning. When my friend rang up and told me the sorry story, I said, ‘Well, put them in the freezer’. So, I had two dead budgies and I was aware of the competition so the two just came together like that. And it won.”

The world’s best-known budgie, Sparkie Williams, had a vocabulary of 583 words, including eight complete nursery rhymes. He came to attention after beating out 2768 other entrants in a competition for talking birds organised by the BBC in 1958.

He went on to front a birdseed campaign and make a record that sold 20,000 copies. On the B side of the Parlophone record Sparkie plays a gangster — “Sparkie the Fiddle” — and Australian actress Lorrae Desmond plays his moll.

Lorrae recalls she was at studios in London’s famous Abbey Road to record her own LP when she was asked if she could put down a few words in a Brooklyn accent for the budgie’s record. “He was on the run from gaol and had just been shot and I had to say, ‘Oi Sparkie, they got ya real bad’,” Lorrae recalls with a laugh. The great bird wasn’t in the studio at the time, but Lorrae later got to meet him when she was performing in his neighbourhood at the Newcastle Empire Theatre. “He said, ‘Hello beautiful, give me a kiss’.”

Sparkie toured the country with his owner Mattie Williams until he died, aged eight, in 1962. Acclaimed in the Guinness Book of Records as the world’s most outstanding talking bird, Sparkie can still be seen today, stuffed, at the Great North Museum (Hancock) in his native Newcastle-upon-Tyne. In 2009 he provided inspiration for the Michael Nyman opera Sparkie: Cage and Beyond. When the opera was performed in Berlin, Sparkie was given leave to appear, and flew to Berlin accompanied by an archivist from the Natural History Society of Northumbria to ensure his safety.

This is an edited extract from Budgerigar: How a brave, chatty and colourful little Aussie bird stole the world’s heart, by Sarah Harris and Don Baker, published by Allen and Unwin, $29.99.

Sarah Harris and Don Baker are both veteran journalists who now live on the Fleurieu Peninsula with their flying dog Smudge.