These last few months all emails from government departments have arrived with a bold heading: For Official Use Only.

What does that mean? It induces mild paranoia. What say I printed out an email, made a paper plane, and pinged it at a colleague’s nose. That doesn’t sound very official. But what’s the penalty? And who will enforce it?

Indeed, I’m wondering what in fact is my official use, if any.

I’m a book publisher. According to the dictionaries, publishing means to “make known”. Often, in a book, that involves the author drawing together threads, peeking into cracks and crevices, to tell a story that may be true or fictional, official or unofficial, or so often an amalgam of both.

I was pondering this recently as I listened to author Lainie Anderson talk at an Independent Arts Foundation literary dinner. Lainie’s novel Long Flight Home takes a kind of sideways venture into a topic she knows much about, the 1919 Great Air Race, in which a mainly South Australian four-man crew in a tiny converted wooden bomber became the first to fly from England to Australia.

There’s a thrilling moment as Lainie tells us the poignant little yarn of how her narrator-hero Wally Shiers, having left his fiancée Helena Alford in their Riverina town for a couple of days while he buys them orange trees in Sydney, gets tapped on the shoulder by a recruiter bearing a Kitchener postcard. And so, off to war, while Helena waits and waits, and then, war over at last, waits some more while Wally joins the Great Air Race flight as air mechanic.

“Is the orange trees story true?” someone asks Lainie. Yep, she replies. She found it fossicking among the scrap-heaps of history. In a taped oral interview at the National Library, no less.

It’s a joy, in this centenary year of the Great Air Race (officially known as the Epic Flight Centenary), to be “making public” again these tremendous events, not only in Lainie Anderson’s novel, but with our anniversary edition of pilot (Sir) Ross Smith’s own account of the hair-raising adventure, Flight to Fame, introduced and with notes by historian Peter Monteath. 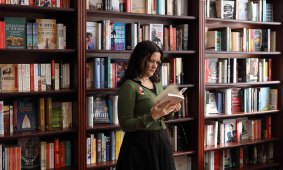 Diary of a Bookseller: crime, sex and political intrigue

Smith’s words, I suppose, might be taken as official ones, though they are clearly aimed at a boys’-own-adventure readership. I sense the hand of a skilled editor. 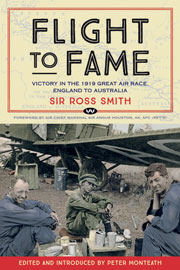 Word is that this century-ago epic flight was as momentous in aviation history as the half-century-ago moon landing. In recent years I’ve come to accept the official account of the latter. Yes, it happened, and Logan’s Run got some facts wrong. Simon Brown, my grade five classmate, was probably fibbing when he told me under oath of secrecy that he could kick a football a mile. Simon also said he had official goss from his dad that on making his first small step, Mr Armstrong would sink into the lunar surface and perish, like the good guys sometimes did in Tarzan movies. When the astronauts didn’t sink, memory tells me we boys got bored watching, and convinced the teacher to let us go fight among ourselves in the cold and hail. (But was it hailing? The issue is controversial among my contemporaries.)

I doubt that a century hence, historians, novelists and publishers will find much of interest in my government For Official Use Only emails. They are routine Q&A exchanges about everyday work. But I dare not delete them. Beware the knock at the door!