Unfettered and Alive tells of journalist, feminist activist and author Anne Summers’ extraordinary life and includes stories about the famous people she has encountered along the way, as well as her own family story, personal anxieties and mistakes.

To launch the book, Matilda Bookshop is presenting Summers in a conversation with former Australian Prime Minister Julia Gillard this Friday at the University of Adelaide’s Scott Theatre (details here).

This extract comes from Chapter 11 – Peace and War, in which she writes of feeling “sickened with apprehension and fear whenever I contemplated the scale and intensity of the wanton violence that seems endemic in our world and which engulfs so many of us. Even my own family.”

On an overcast day in October 2014, in a far corner of the Catholic section of Adelaide’s West Terrace Cemetery, my family gathered in front of the unmarked grave that for 79 years had held the remains of our grandfather, John Patrick Cooper. We were there for a final act of reconciliation.

When my father’s father died suddenly aged 51 in 1935, his wife and sons bought him a hole in the ground, but that was all. No headstone, no marker of any kind. Not even his name was recorded. He had lain unlamented in the ground ever since. Nor, until my brother Greg Cooper decided in 1988 to search for his grave, had anyone visited him. Greg had been shocked to discover the plot was full of weeds, and that a tree was growing up through it. Now, all these years later, his five surviving grandchildren — my three brothers, Tony, Greg and Paul, my cousin Pam Kelly, and I — had decided to give him a headstone.

My father never spoke about his father. As we were growing up we knew practically nothing about him, apart from a few fragments of family legend. He’d been a stretcher­bearer on the Western Front during World War I, my mother had told us. He was the only survivor when the four men carrying a loaded stretcher across No Man’s Land had stepped on a land mine. We were given to understand he was a violent man, but we were told no details. And we never asked. It was only as they approached their own deaths — my father in 1988 and his brother Arthur in 1997 — that they started to open up to their children about the brutality of their upbringing. My father visited Greg at his home one night early in 1988, when his wife and kids were out, and spoke for hours about the horrors of his childhood.

There were stories of smashed toys and holes in walls.

My cousin Pam Kelly also had a conversation with her father Arthur as he lay close to death, and learnt that in 1928 our grandfather had put him, then aged seven, in hospital with a broken arm and jaw, injuries so severe the medical staff refused to believe that a father could have inflicted them.

There are no records of any of this beyond our fathers’ late-­in-­life disclosures. We have tried to find more, but while official records have yielded details of his work as a clerk for the tramways, and that he played the banjo in a small band that entertained prison inmates and performed at weddings, there is nothing that tells us what kind of man he was. We will never know how much the brutal experience of the trenches contributed to the way our grandfather was. We know war has a brutalising effect, and that his generation of returned soldiers often made their families bear the brunt of how the war had changed them. That was what had happened to our fathers. We grew up living with what World War II did to them with their ‘surly moods and intermittent brutalities’, as George Johnston put it in My Brother Jack, his brilliant novel about young men of our fathers’ generation. We had not, until now, really confronted what World War I had done to their fathers, and how that had shaped them as well.

Richard Flanagan begins The Narrow Road to the Deep North, his powerful novel that won the 2014 Man Booker Prize, with a scene about the impact of those who returned from the First War on the men who went to the Second. Flanagan’s central character is Dorrigo Evans, who endures the murderous conditions of the Japanese forced­-labour camps. As a young boy Dorrigo had watched, astonished, when his older brother Tom returned from France: ‘He had swung his kitbag onto the hot dust of the siding and abruptly burst into tears.’ In 1918, men did not cry. It was so rare that it was frightening: ‘It was a sound like something breaking.’

Thousands of Australian families have lived for almost a century with the consequences of that breaking. John Cooper was 32 when he enlisted and his wife, our beloved Nana, tried to leave him then but was forced back to the marriage by her own father. This suggests he may already have been a violent man. We know he hit his wife so hard, she fell backwards against a door and knocked it off its hinges. We can speculate that his elder son’s relationships with his own children may have been affected by the cruelty of his childhood. We do know that he, his mother and brother wanted nothing to do with his memory once he was gone. Over the years, both sons accumulated enough money to buy their father a headstone. They chose not to.

They buried their mother in another cemetery altogether, many kilometres away from her husband, with a handsome headstone that, inexplicably to us grandkids, mentioned her ‘loving husband’.

I’d written some of this in The Lost Mother in 2009 and it had prompted Patricia Smith, a woman in her 80s, the daughter of a World War I soldier, to contact me. She had visited France, she told me, and ‘wept in countless graveyards and read the inscriptions on headstones, and the thousands of those whose names were not known and read down the lists of those who have no known burial place’.

‘You do know where your grandfather is buried,’ she wrote, ‘It is too late for forgiveness, but bring him “home”, give him a name and a defined resting place and hope that his story shows the young in the family the utter futility of war.’

I showed the letter to my brothers and my cousin. Greg and Tony reminded me that they had initially talked about placing some kind of marker on the grave when Greg had first found it, back in 1988. Smith’s email gave that idea a new impetus. We were also influenced by Rosie Batty. After her son Luke was murdered at cricket practice in a small Victorian town by his father earlier that year, she had spoken of the need for families to talk about the violence so many of us harbour. We decided we would give our grandfather a headstone.

We talked a lot about what it would mean to do this. Were we forgiving him his violence? One brother was sentimental in that he just wanted to complete our family. Another felt we should respect the inaction of Nana and her two sons: the violence must have been pretty bad for them to have done this, was his thinking. I was insistent that our action not be seen as condoning this man’s behaviour. Then there was the question of what should be written on the headstone. We concluded that it was not for us to counter­ mand the decision of Nana and her sons by now including their names. We did eventually agree that his war service should be acknowledged. He was the only member of our family to serve in World War I (Mum’s father, a good Melbourne Irish Catholic, had obeyed Archbishop Mannix’s stric­ ture about not getting involved in what he saw as primarily a British war). Greg obtained permission from the War Graves Commission to use the AIF emblem. The headstone we erected on the dismal patch of ground that had been his resting place for so long listed his name, and gave his dates of birth and death. ‘Served in WWI on the Western Front,’ it read. ‘Remembered by his grandchildren Anne, Pam, David, Tony, Greg & Paul.’ Greg had checked with David’s widow, Annie, about including his name as we were sure that David would have wanted to be part of this.

Joining Pam, my cousin, and her husband Steve, and my brothers and me at the graveside that day was Greg’s older son Matthew, Tony’s son Jake and Paul’s older son Richard, as well as David’s daughter-­in-­law Linda and her three children, Jasmine, Josh and Chelsea. Three generations of Coopers confronting our grandfather’s violence, the younger ones listening as we, the grandchildren, made clear that while we were bringing him ‘home’, we condemned the way he had treated his wife and children. We understand more these days about the ongoing trauma inflicted on those who go to war — how it damages people, often permanently (especially if left unacknowledged) — but we have talked less about the lethal impact on their families and the cycle of violence it perpetuates across generations. My family hoped that by acknowledging the person while repudiating his behaviour, we might help start to break these cycles, so men can learn to deal differently with buried pain and raging emotions. I was grateful that my brothers were the kind of men who could talk about these things. I hoped the cycle of violence in our family was now spent. As it needs to be in so many other families.

Looking around that unkempt corner of the cemetery, at the plots up and down the rows where our grandfather now lay acknowledged, it was chilling to see just how many unmarked graves there were.

Extract from Unfettered and Alive, by Anne Summers (Allen and Unwin), published October 24. Details of the Anne Summers in Conversation with Julia Gillard event in Adelaide this Friday can be found here. 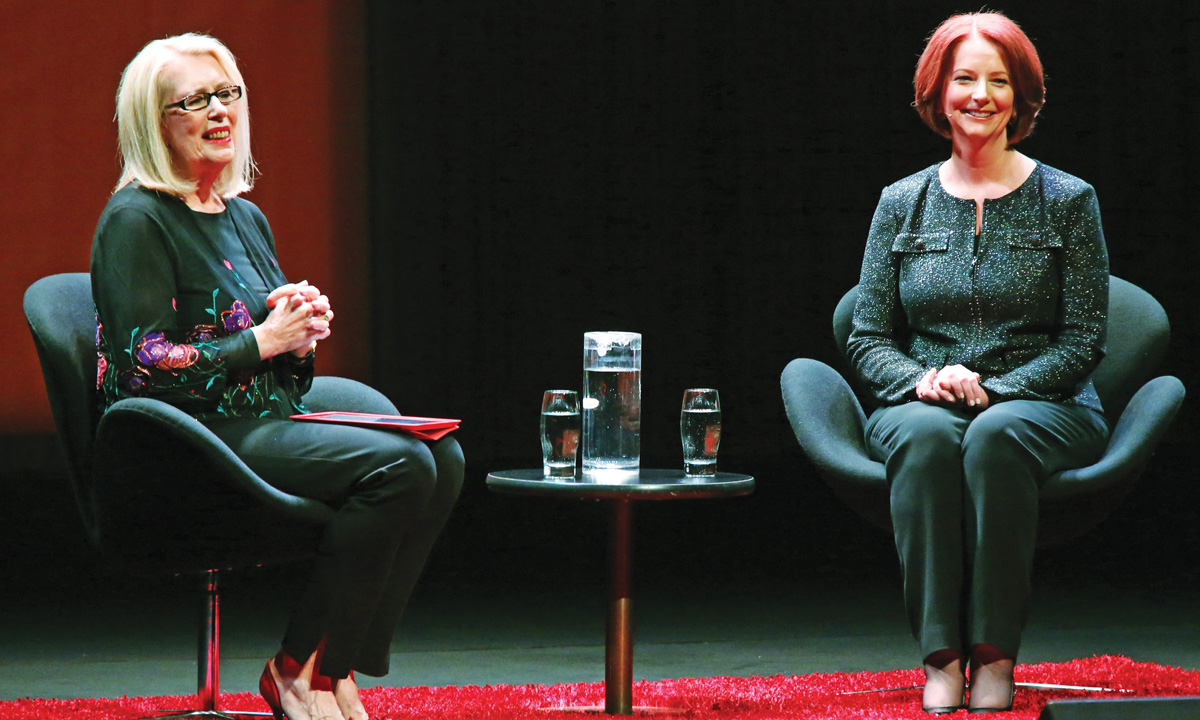 Anne Summers’ interview with Julia Gillard at the Sydney Opera House on September 30, 2013, was her first public appearance after she was dumped as Prime Minister. Photo: Unfettered and Alive