“I’m sorry to see it go but for me, at 67, it’s more than a blessing in disguise,” Treloar says of the second-hand shop, part of the Grote Street Antique Market which shuts its doors tomorrow after 36 years of trading.

“I would never have made the decision to close it down because that means automatically I’ve brought myself a very large load of work to dispose of all the books … but now that it’s been made for me I’m disposing of every one of those 30,000 books.

“Effectively, I’m dismantling that end of the business.”

Treloar has been selling the Book Room books at bargain prices in the lead-up to the closure, but his flagship North Terrace outlet, Michael Treloar Antiquarian Booksellers, is still very much in business.

The Antiquarian Booksellers shop specialises in exceptionally rare books, photographs and manuscripts. Its shelves are crammed with all manner of treasures while display tables highlight the esoteric range, with smaller publications protected by plastic sleeves.

The shop is really only the tip of the iceberg – Treloar has another 250,000 or so books in storage elsewhere.

Offering a potted history of his more than 40 years in the book business, he reels off a list of dates: March 1976 was when he opened his first bookshop in the Central Market; in June 1977, he opened a second shop in College Park; in 1979, he sold the market outlet, only to open the second-hand bookstore at the Antique Market a few months later after belatedly realising the benefit of the area’s foot traffic.

October 1997 was when the North Terrace shop opened, and in 2004 he made the decision that it would stock only the rarer and therefore more valuable books, while the Grote Street store would remain a traditional second-hand bookshop. The books there could be sold more cheaply, and he would save time and money by not cataloguing them or putting them online.

“I could see clearly that the rot had set in with general second-hand book selling and I made a business decision to not have here at this shop anything that wasn’t a very competitive $40.

“You might wonder why I have such recall for these dates but they are red-letter days in my life – singular events.”

He adds: “I love numbers, I love statistics, I love dates – as a little boy I used to read encyclopedias.” 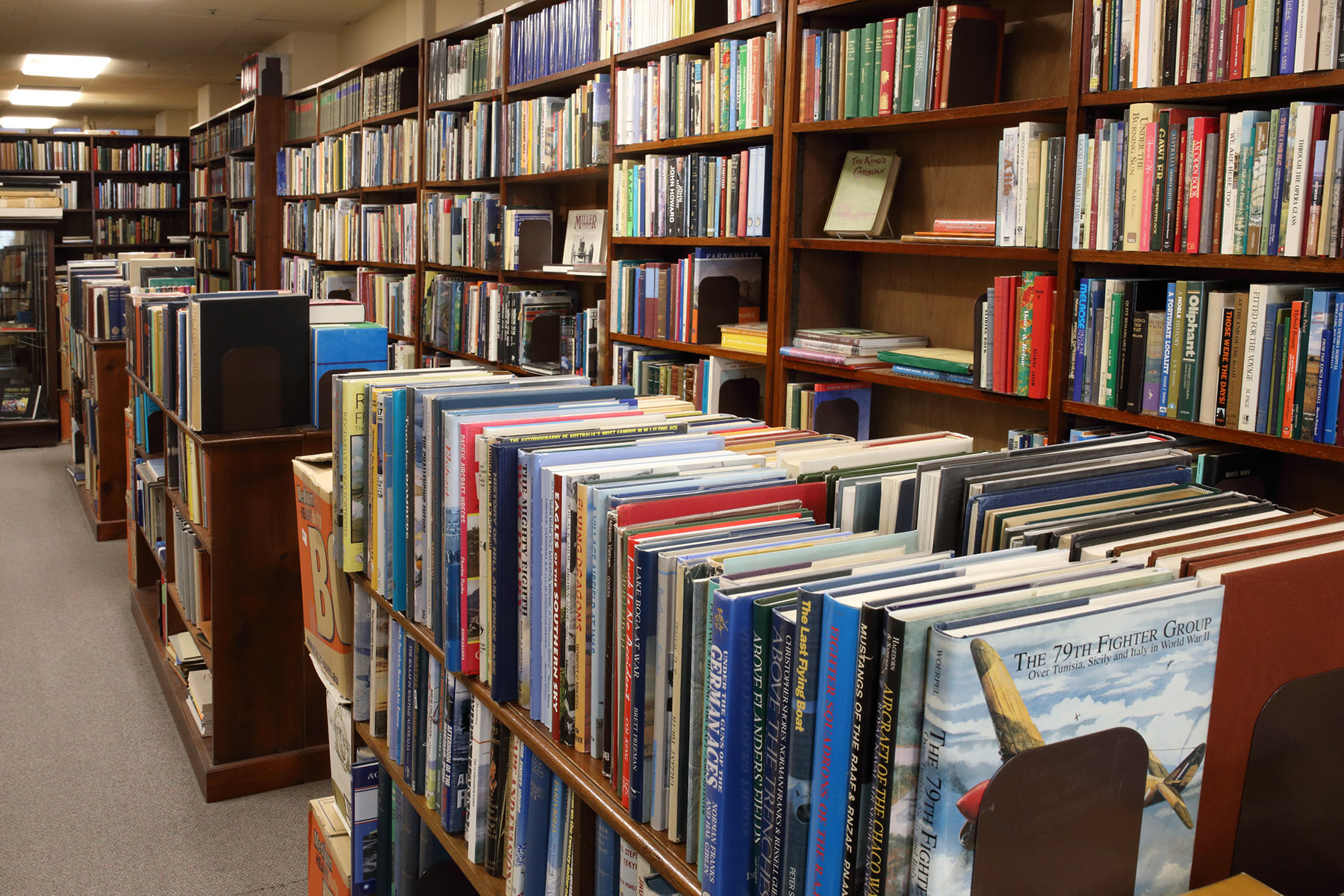 Throwing out another date, Treloar says it was in 1990 that he decided to embark on a concentrated study of two allied branches of bookselling – vintage photography and manuscripts – alongside out-of-print and antiquarian books

Although he couldn’t have predicted then the impact that the internet would have on the price of what he describes as “standard books”, he did anticipate that the bookselling landscape would change. And even if it didn’t, he might not still have the same “fire in the belly”.

Most of the items he buys now are unique – which means he can’t be undercut on price – and they’re sold through the shop, catalogues, auctions and direct approaches to institutions such as libraries and museum.

Seeking to illustrate just how unusual some of the items are, Treloar extracts from his office shelves a brown, well-worn, nondescript-looking book and starts leafing through it, reading from the hand-written entries.

The early pages, dating from 1817 until the mid-1880s, contain standard ledger notes about items bought and sold by a David Mack Jnr from Connecticut. Then, from 1869 until 1877, it transforms into a diary recording what the author describes as “Reminiscences of an Old Man” (he notes that he turned 84 in 1876).

Astonishingly, it includes a section on “Peter the Slave”, “an old blind negro who lived with a family within a hundred rods of my father’s house”. Mack Jnr writes:

“He was kidnapped or stolen away from Africa when he was a small boy supposed to be about seven, and as he said the grandson of an African chief… he was seized by a band of kidnappers, carried on board their ship, brought to Hartford and sold as a slave.”

Treloar says, incredulous: “So then this is the biography of Peter the Slave. About the [time of the] revolutionary wars in 1775 … this guy was kidnapped in the first decade of the 18th century.”

He discovered the ledger at a booksellers’ fair in Boston last year and purchased it for just $US60 from a seller who was – surprisingly, given the price – aware of diary entries.

The “ledger” is listed for sale in Treloar’s current catalogue for $A15,000.

“If this doesn’t go back to America in two weeks’ time, I’d be amazed …

“There would have been 150 of those [ledgers] that I picked up and looked at… the other 149 were just ledgers.”

From Buckskin Brigades to lumpy jaw

Describing himself as essentially “a missionary for the book”, Treloar says that this month he travelled to Canberra to offer “significant items of Australian military history” to The Australian War Memorial and archival material to the National Library.

Other items he is currently offering for sale include a memoir about the Third Australian Light Horse Regiment, published in 1950 in Adelaide; a first-edition copy of Scientology founder L Ron Hubbard’s first novel, Buckskin Brigades; three original “facsimile illustrations” by Hal Gye of his artwork in the 1915 CJ Dennis book of verse The Songs of a Sentimental Bloke; and a Depression-era copy of The Children’s Hour hand-bound in a recycled flaked oats linen bag.

Also featured in his June catalogue is an Agricultural Department report on contagious diseases in animals, which has been extracted from 20 years’ worth of British Parliamentary papers from 1870s to the 1890s that Treloar has in storage. This particular report contains what are described as 23 “highly detailed and impressive” plates illustrating a range of diseases.

“This is an example of lumpy jaw,” Treloar exclaims, pointing to a large and rather too detailed illustration of a cow’s diseased tongue.

“You don’t have to like it, but you’ve gotta love it.”

It has been catalogued with a price tag of $750 and a note commenting: “Reading these reports suggests that the rise in vegetarianism in Victorian England was not without good cause.”

“That’s not the same as sitting there reading every bestseller that comes over the counter … my approach is I just love to engage with the stuff that is coming across my desk or that I go out and seek to have.”

I can’t play golf, I don’t like bridge … … really, when I was 25, I discovered something that was never-ending

The two different sides of Treloar’s business have worked well together, but he had no interest in moving the traditional bookshop in the Antique Market to alternative premises after the market’s closure.

His main passion and source of income is the rare and antiquarian book trade, and he admits he has found general bookselling less pleasurable – and profitable – since the advent of the internet.

So what of those 250,000 books in storage? He’s in no hurry to sort through them, but some might turn up in his Town Hall book sales which are generally held a few times a year.

“I don’t spurn it,” Treloar says of the traditional second-hand book market.

“In fact, I think that’s what bookselling is fundamentally all about and I’m pleased to think that that’s not going to go away.

“But it’s changed and there’s no room for me in the changed landscape at that level, which suits me because I’ve got so much experience and I know how to make money out of valuable bits of paper.”

He’s confident that there will still be a future for bookselling and booksellers, and that he’ll be “gainfully employed” for the rest of his working life.

“Twenty-four hours a day, seven days a week, that’s what you’ve got – how you fill them in is the measure of how agreeable a life you have.

“I can’t play golf, I don’t like bridge … really, when I was 25, I discovered something that was never-ending, it was guaranteed to be engaging and, to me, it’s a better use of my time than anything else.”