Those familiar with the series will know the action takes place in Northern Ireland, where McKinty was born, during “the troubles” of the early and mid ’80s. If you’ve not read the first four books in the series, fear not, Rain Dogs can be read as a stand-alone novel without any difficulty.

In this mystery, Detective Inspector Sean Duffy is called to Carrickfergus Castle, where a young journalist, Lily Bigelow, has apparently committed suicide. The problem is, some of the details just don’t add up.

Duffy met and hit on her the previous day and she didn’t seem at all suicidal; there wasn’t much blood around her body, considering the height from which she fell, and on top of all that, her shoes were on the wrong feet. Could she have been murdered? And if so, how did the murderer penetrate the locked gates and thick, 800-year-old castle walls?

As Duffy and his team investigate, evidence of high-level corruption involving British politicians and celebrities begins to emerge. If Bigelow had been pulling on those same strings, she threatened to bring down the whole establishment.

While this is a tightly written and plotted crime novel, it’s not one of the best on the market right now. It does touch on the times and setting (Duffy constantly checks under his car for bombs, and the opening scene features Muhammad Ali’s 1987 trip to Belfast), but these aspects are disappointingly sparse. Given the interest many readers would likely have in this period, McKinty might have made more of it.

Additionally, the writing is extremely plot-driven. It’s all about the puzzle – who did it and why. Most good crime novels these days include some character development and a decent subplot or two, and these are lacking in Rain Dogs. The result us a rather slow-moving read, which at times verges on boring.

The positive parts included the characterisation captured through dialogue and Duffy’s sharp wit and continual bad jokes. Notorious paedophile Jimmy Savile makes an appearance, and McKinty does a wonderful job of portraying him on the page. But again, the novel is so dialogue-heavy that it could almost be a screenplay.

Rain Dogs will appeal to readers who enjoyed the other books in the series, and those drawn to crime novels that are all about solving the puzzle. If, however, you enjoy your crime with a bit more depth, this probably isn’t for you. 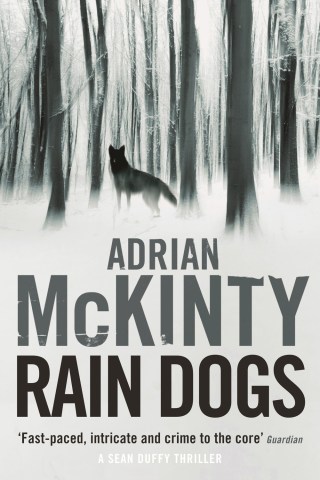