Australian author Geraldine Brooks has a special talent for making history sing, from life in a 17th-century English village infected by the plague (Year of Wonders) to a love story set against the backdrop of the American Civil War (the Pulitzer Prize-winning March).

With her latest book, the Australian author – who will speak at an out-of-season Adelaide Writers’ Week event on Friday – reaches much further back in time with a compelling retelling of the biblical story of King David in Second Iron Age Israel, circa 1000BC.

Told through the eyes of the king’s prophet, Natan* (Nathan), it traces his life from his early years as a shepherd boy, through his anointing by the prophet Shmuel (Samuel), his service for King Shaul (Saul), his years as an outcast warrior, and his eventual claiming of the throne and establishment of his own kingdom.

The Secret Chord is not, however, simply the tale of one man and his quest for power. It is also the story of the characters who surround him – including Natan, the winemaker’s son whose first vision of David’s future is the only thing that saves him from the sword of the man who slayed his father in cold blood.

Brooks offers an insight into the lives of the King’s many wives and his only daughter, Tamar, whose rape by one of her brothers is one of the most harrowing of many brutal scenes in the book. There’s also an intimate depiction of his fiercely intense affair with Shaul’s warrior son, Yonatan (Jonathan).

The King is presented, especially in the early part of the book, as courageous and magnetic, a man with the heart of a harpist and poet. But it is his flaws – his arrogance, the thirst for battle, his lust for both flesh and power, and his blind loyalty to his own sons – which underpin much of the drama in The Secret Chord.

Natan’s main role is to offer him guidance. Yet the oracle’s most powerful visions – received while he wanders the desert, distraught after his King’s most blatant abuse of power – is more of a curse which he himself can do nothing to forestall:

… as I had told him, Yah did demand a sacrifice of him. Bloodguilt demanded a blood price.

It is this sacrifice – or, rather, sacrifices – that pave the way for the rise of David’s youngest son, Shlomo (Solomon).

Brooks has said she set out to look beyond the “ubiquitous David”, to investigate “who was this warrior-poet-musician, this lover and killer, who experiences every human joy and every human heartbreak?” 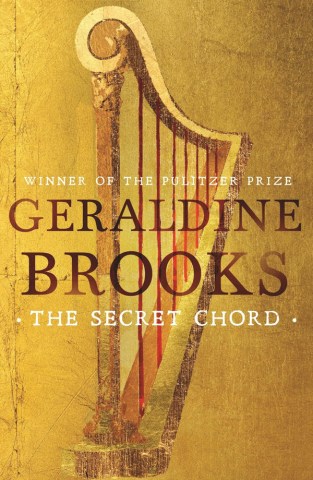 The Secret Chord, by Geraldine Brooks, Published by Hachette Australia, $39.99

In this she succeeds, presenting a very human drama despite the fact it is imbued with myth and mysticism. She also paints a vivid and evocative picture of life in 1000BC Israel.

Some readers may be deterred by The Secret Chord’s biblical backbone; they shouldn’t be. It a ripper read, far more absorbing then most contemporary dramas.

* Brooks uses Hebrew name spellings throughout the book, rather than there more familiar alternatives.