Adelaide author Stephen Orr’s latest novel opens with what appears to be the abduction of a young boy in a small town called Guilderton. One minute the pyjama-clad child is running down a laneway and hiding behind some rubbish bins, the next a butcher having a cigarette break sees a car stop and a man grab the “scared shitless” boy and throw him in the boot.

It seems like an obvious and frightening case of kidnapping, yet the local police don’t immediately rule out the idea that there could be a less sinister explanation – especially since no one has actually reported a boy missing.

Leading the investigation is Detective Bart Moy, a former Guilderton lad who has returned home to look after his elderly dad and now heads up the town’s small police force. His initial inquiries lead nowhere, although they do give the reader an insight into the insular nature of the wheatbelt town and its residents.

When the missing lad does turn up, apparently traumatised and not speaking, the mystery only deepens. 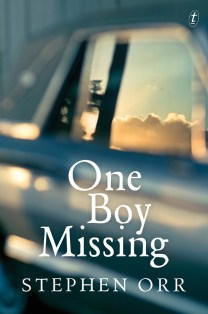 The bulk of the novel revolves around Moy’s patient efforts to gain the boy’s trust so he can learn who he is and what has happened to him, with the discovery of a burnt-out house at the edge of town adding to the pressure for answers. The detective’s progress with his young charge runs parallel with the unfolding story behind his own personal tragedy and his attempts to improve his strained relationship with his grumpy father.

Orr – whose previous books include the Miles Franklin long-listed novel Time’s Long Ruin – portrays the pain underlying Moy’s search for redemption in a manner that is both sensitive and subtle. This is one of the great strengths of the book, alongside the warts-and-all depiction of Guilderton, which will ring true to anyone who has grown up or lived in a small country town.

If there’s a weakness in One Boy Missing, it’s in the lack of urgency which seems to surround the investigation into the missing boy. When a child disappears in circumstances such as this, it usually creates panic, national headlines and extreme pressure on authorities to solve the case – which would be expected to intensify when there is also concern for others in the family. It’s hard to imagine a small-town police chief being left largely to his own devices when little progress is being made.

Nonetheless, it is the tension created by Detective Moy’s frustratingly slow-moving investigation, along with the quiet intensity of his increasingly close relationship with the once-missing boy, which keeps the reader engrossed in the story and ultimately makes the novel so rewarding.

What really happened to the boy and where is his family? And what happened to Moy to bring him to this point in his life. You’ll have to read to the end of One Boy Missing to find out.