What we call coffee-table books are often not intended for close reading or a lingering focus, but rather a glossing over with momentary oohs and aahs.  The Green Desert is a clear exception. Peter Elfes’ photography captures astonishing views of Australia’s interior, beautifully complemented by Peter Timms’ informative and complementary text.

The paradox inherent in the book’s title is intentional, reflecting the effect of the rare flooding of the Lake Eyre Basin (Kati Thanda) that produces burgeoning wildlife for a relatively short time.

Elfes’ pictures offer quite recognisable views one moment and beautifully abstract ones the next.  The arresting cover shot is one striking example of the latter.  That image folds out in four directions, so that it does the original justice – and this alone says something about the attention to quality of this volume.

The basin normally takes up a sixth of Australia’s land surface and, remarkably, it flooded in three successive years recently: 2009, 2010, and 2011. Timms refers to such events as producing “a kind of mass longing” in the public consciousness, and it is that which The Green Desert taps into. 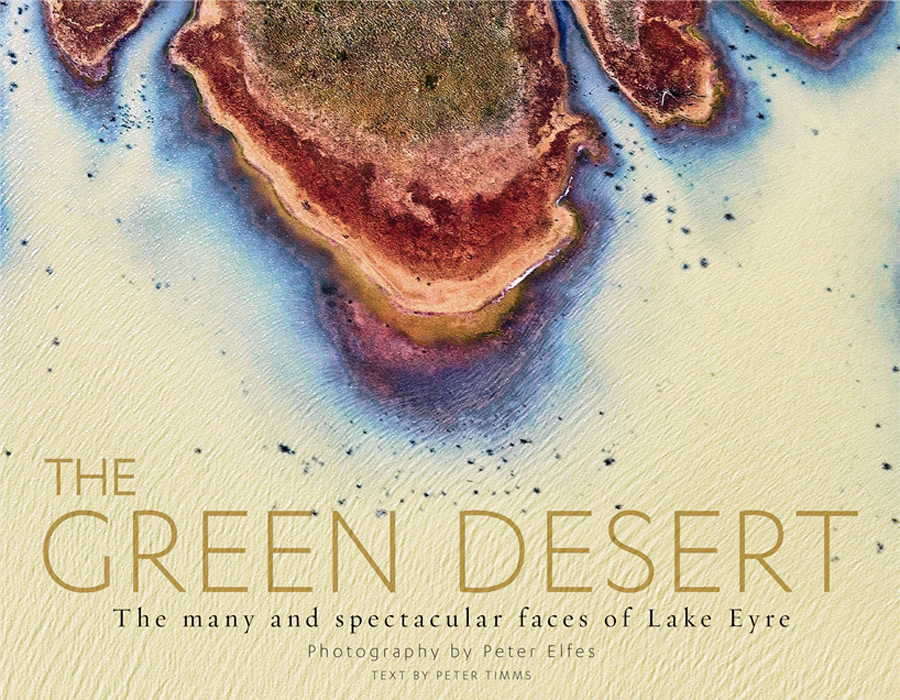 After describing something of his own family’s migrant photography business (and that, too, is interesting), Timms uses these flood years to frame successive individual chapters with Elfes’ corresponding pictures. He explains how his interest was initially boosted by the late Paul Lockyer’s ABC documentary of the basin in 2009.  Readers may well recall both it and the matching book, Great Southern Land, which had a wider geographic focus than this volume.

The final chapter addresses Timms’ own growing and life-altering connection with the Adnyamathanha people, who are the traditional owners of the country.

The text never overwhelms the pictures, nor vice versa.  Both emphasise the relative insignificance of humankind in this environment, evoking a sense of spiritual wonder rather than pointlessness.  You understand how one can lose the ability to situate oneself when there is no clear point of reference in the landscape, how the place presents the idea of the unframeable just as it is being photographed.

Elfes says that he had to confront the notion that the lake was “a much more complicated place” than he had expected.  He says that “one of Australia’s great attractions is that there are still vast spaces to get lost in”, and that we carry a great responsibility to care for it.

When you see this book, you’ll be bound to agree – and to want your own copy.