Jack Reacher is back for his 18th gripping adventure in Lee Child’s latest novel, Never Go Back. Forget the Tom Cruise movie, in the novels Reacher has “an extreme mesomorph physique, with a six-pack like a cobbled city street, and a chest like a suit of NFL armour, and biceps like basketballs, and subcutaneous fat like a Kleenex tissue”.

Moreover, the writer has produced another genuine page-turner that the reader never wants to end.

Child is brilliant at conveying mood and atmosphere, while wrapping the reader in the tense drama every step of the way. By the time we reach the stylish conclusion of this finely tuned non-stop thrill ride, we’re already impatient for the next in series. 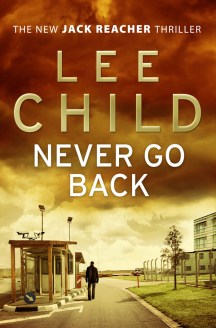 The story begins when Reacher arrives at the headquarters of his old unit, the elite 110th Military Police, looking to meet new commanding officer Major Susan Turner, who he has been obsessed with since he first heard her voice on the telephone in 61 Hours (Child’s 14th story). When he arrives in Washington, he’s warned to leave, and as usual his fists talk for him. But even he’s thrown the next morning when he discovers Turner is incarcerated and he’s been re-enlisted back into the army.

To complicate matters, he’s facing a murder charge and a paternity suit. There’s only one thing he can do: rescue Susan Turner and go on the run.

The chase that follows is an exciting mission in the pursuit of truth, justice and freedom; it has lots of twists and turns, without losing any footing. As usual, Reacher is ahead of the game, daring everyone to guess his next move. Sometimes not even he can keep up.

Never Go Back is a neatly structured and absorbing thriller – an exhilarating tale brought to life by incisive characterisation and potent dynamics.