In an ancient land stands The City, a vast empire which has risen from the ashes time and time again. Rebuilt over centuries, The City has spread into neighbouring kingdoms and its people have been at war for generations.

Hidden deep within its walls lives the emperor; few have seen him in person and many believe that he is no longer human, but his relentless quest for power has seen countless men, women and children perish in a never-ending battle for territory.

Faced with a lifetime of pointless slaughter, a handful of rebel fighters devise a desperate plan to kill the emperor and finally end the war. The success of this treacherous plan rests on the shoulders of a man who was once a trusted general in the emperor’s army, but who was betrayed and tortured by those he served; a soldier many believe to be dead. 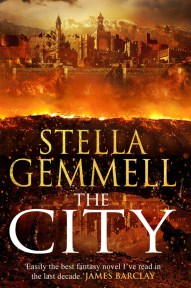 Spanning several years, Stella Gemmell’s epic story begins deep within the rotting sewers of The City, where young orphans Elija and Emly have sought sanctuary from the war raging above. For four years they were safe in the darkness until a flash flood separated them, sweeping Elija into the hands of foreign fighters while Emly finds safety with Bartellus, whose painful history eventually forces them to return to the world above. Meanwhile, in the bloody battlefields surrounding The City, a soldier named Indaro struggles to overcome her family’s shameful history under the increasingly watchful eye of her commander Fell Aron Lee, a mysterious man whose past could shake the very foundations of The City.

As the story unfolds, Gemmell subtly weaves together the lives of these characters, uniting them in their mission and creating a sense of intrigue that stays with the reader until the final confronting chapters.

At well over 500 pages, The City is not exactly light reading and the first half of the book moves at an irritatingly slow pace as Gemmell switches from one character to another, exploring their complex histories and emotions in great detail. While this approach may be frustrating, it is also necessary, as each character has a rich backstory full of tragedy, pain and loss, and these events play a pivotal role in shaping their personalities and determining their actions.

Gemmell’s gift for descriptive writing paints a vivid picture of a harsh, unforgiving landscape and characters who have been emotionally and physically broken by years of combat. Graphic battle scenes bring the conflict to life in stunning detail.

With myriad masterfully constructed plot twists and intelligent, well-crafted characters, The City is an intriguing fantasy story – once you get past the first dozen chapters.