“I put a lot of energy into my work, especially with the newer stuff I’ve been working on, and there’s so much more joy and strength.”

Wright’s artistic identity is rooted linocuts, where sheets of linoleum are carved with an etching tool to make a design, before being rolled-over in ink and pressed into paper or fabric like a stamp.

For this interview, InDaily visited her printmaking studio, which doubles as her bedroom.

As we sit on her bed, Pentagram’s 1985 album Relentless plays through a laptop. Pentagram helped pioneer the doom metal sub-genre – think slow tempos, low-tuned guitars and despair. Next to the laptop sits a cushion with a crucifix sewn on it. Around the room hang different flags from metal bands.

“I’ve been in and out of studios for the last few years, but it’s not sustainable for me,” says the artist, who originally operated out of the East End’s Tooth and Nail studio as one of the seven founding members of Print Cult.

Wright was one of the pioneers of the contemporary printmaking scene in Adelaide nine years ago, along with Joshua Searson, Jake Holmes, Jake Bresanello, Jayson Fox, “Ankles” and Tommaso Pascale.

The “crew”, as Wright calls it, formed during her third year at TAFE where she was studying a degree in visual arts, majoring in 2D subjects with the hope of becoming an illustrator.

Instead, she fell in love with printmaking.

A woodcut Wright completed in 2018 which signalled a new direction in her work. Photo: Angela Skujins

These days, Wright etches, prints and washes her silkscreens from her Norwood share house but says she spends most of her time in her bedroom, which she calls her “little safe zone”.

“Everything I need to inspire me is here.”

Next to where she sleeps is a mountain of stacked books; on the other side of the room is an open wardrobe filled with metal T-shirts. A hammer hidden underneath the bedside table was a gift from her dad because the window wouldn’t lock.

A flag celebrating one of the bands that started Wright’s love for heavier music, Slayer, opposite her bed. Photo: Angela Skujins

Wright finds it difficult to define her work – which, as well as prints, spans ceramics, journals and graphic design.

“My work is really personal to me, and I don’t do it for monetary value. Essentially I do it because it’s my way of figuring my shit out, through storytelling and mythology.

“I definitely look to cool ’80s thrash metal artwork, and then hectic black metal for inspiration, but more so mythology and stories.”

There are religious themes to her work – devils, angels and mythical beasts are common – which she puts down to her Croatian Catholic upbringing.

When she was younger, Wright’s older brother made her mixtapes of classic punk bands, such as Misfits and Bad Religion. He also took her to “straightedge” – alcohol and drug-free – punk gigs.

One night the siblings saw thrash metal band Slayer on Rage, and something clicked in Wright.

“Then for my next birthday I think he bought me some kind of CD, and it was either Slayer or Cannibal Corpse,” she says.

Wright believes these metal sub-genres – thrash metal and death metal – resonate with her because of their ability to tell elaborate stories, use theatre and employ controversial cover art that can “transform” the listener.

A love of story-telling is present in her work, which often features a cast of ghoulish or angelic characters moving through fire, mountains or clouds.

Wright’s work is more than just fantasy, however, as she has also been crafting some of her own narratives through her art, which she says often elicits joy and catharsis. And she is exploring greater use of colour and new materials, such as cotton. 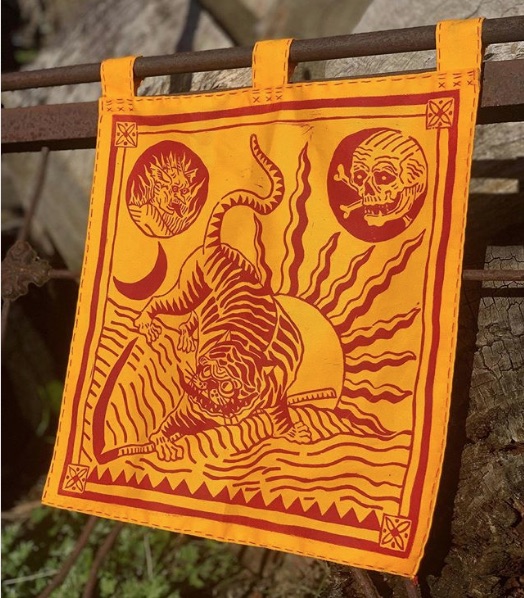 In every piece of artwork she creates, there is a character or a symbol that represents herself.

“Whatever’s going on in my life or in my mind at that point, that’s what’s going to come out in the artwork,” she says.

“It’s like a pure form of expression, and it’s probably the reason why I’m quite guarded and don’t always have stuff up for sale.”

One particular print she made during and after a traumatic breakup still stings.

“The block itself took me six months to finish, and it was probably another six months before I printed it.

“I also had to have a friend come over to help me print it because it was a really emotional piece, so much so I gave him a print for helping me out. After a month he had to take it down because there was a miserable energy around it.”

Wright says her work has come a long way in the past decade and she is excited to exhibit it formally in December in a yet-to-be-confirmed location. To cement this growth now in tangible terms she has also set up a website where people can purchase her art.

“I’ve grown a lot in the past couple of years since anyone’s seen my work. I almost have a big story to tell of what’s been going on in my life by what I’ve recently created.”