Registrations for events listed in the printed guide closed on Wednesday.

Fringe told InDaily yesterday that more than 800 print registrations had been received, but the total number of shows is expected to increase over the coming months as online artist registrations will remain open up until the February 19 – March 21 festival.

Although this week’s announcement that the RCC will not be returning to the University of Adelaide’s North Terrace campus in 2021 seems to have put its future in doubt, the Garden of Unearthly Delights and Gluttony are advancing their site plans.

All Fringe spaces are working under the expectation that current COVID-19 social-distancing guidelines and half-capacity rules for venues will still be in place in Mad March.

“Because we have 50 per cent capacity in venues, we will have a couple of venues that are really, really large – like huge tents – just to try and get a reasonable number of people in them,” Gluttony director and owner-operator Daniel Michael said this week.

The Rymill Park hub had a total capacity of 10,000 people this year and will occupy a larger site in 2021. Michael is still in discussions with SA Health, but believes it is unlikely any space or event will be allowed to exceed 5000 people.

Gluttony is adapting in a number of ways, including making use of the space around Rymill Park Lake, introducing a big new outdoor stage, and replacing its small comedy venue The Piglet with an open-air venue.

“People are just going to have to understand that some shows are going to be outdoor… so it’s like going to a concert or sporting event – you do have to prepare for the weather in that instance,” Michael says.

“There’s not really a practical way for us to present all the shows we’re going to present in any other way.

“On a nice sunny day or a nice balmy night, the outdoor venues are actually going to be better… some of the outdoor spaces we’ve come up with are really great, and we’re like, ‘Why didn’t we come up with this before?’.”

With half-capacity, Gluttony will have around half the usual number of venues (about 10, compared with 19 in 2020) and shows. However, Michael says Fringe-goers can still expect a mixture of music, magic, comedy and physical theatre, with “quite a few” interstate artists on the line-up.

Another major change is that there will be four public access points to the hub to avoid bottlenecks and clustering, with tickets advising which gate audience members should use to get to their show. 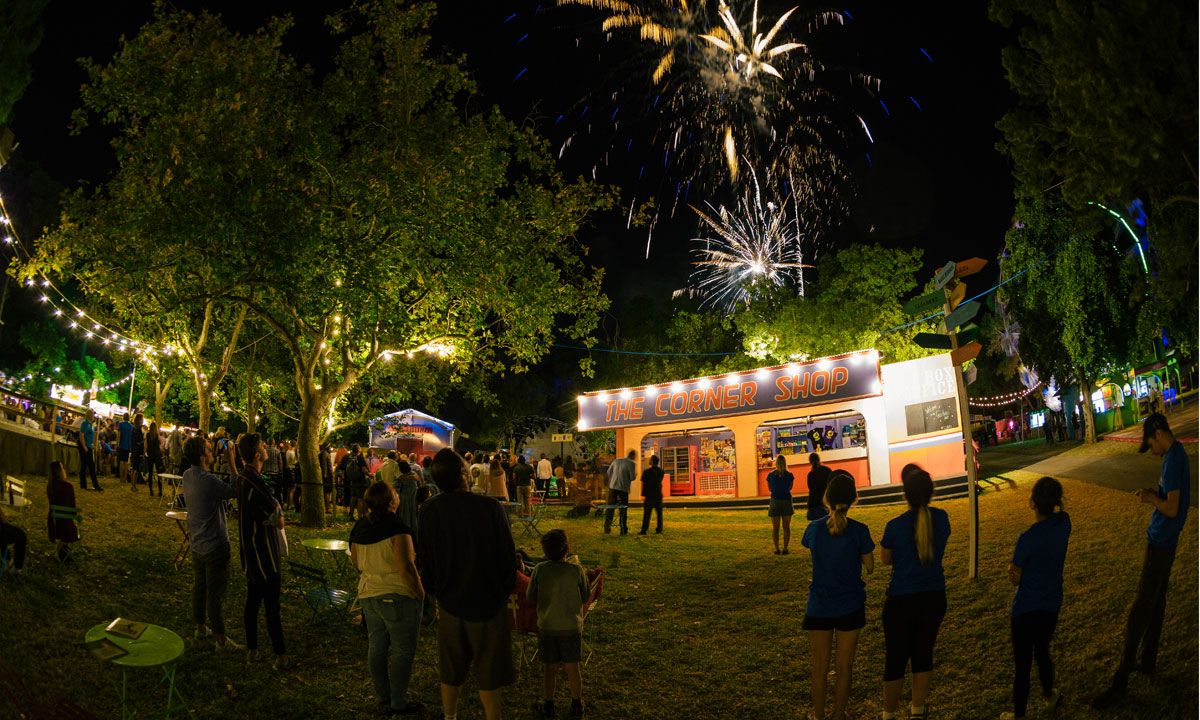 The Garden of Unearthly Delights will inevitably look different at next year’s Fringe. Photo: Andre Castellucci

Across the road in Rundle Park, the Garden of Unearthly Delights usually attracts more than 750,000 visitors each Fringe season and this year hosted around 112 shows across 17 venues.

Although GOUD director Michelle Buxton declined to answer specific questions about the hub’s likely capacity in 2021 and how COVID-19 restrictions would affect  the size of its program, she said the Garden was “working hard to bring Adelaide yet another sensational feast of live performance from the very best artists in the land”.

“We are creating some fabulous new open-air venues and redesigning the site layout to meet all COVID-safe requirements.”

In a recent interview with InDaily, Adelaide Fringe CEO and director Heather Croall said many regular Fringe venues ­– including places such as the Rhino Room, Nexus, Holden Street Theatres, The Governor Hindmarsh and Trinity Sessions – already had COVID-safe plans in place and were presenting shows.

“And yes, they’re at capacity of 50 per cent, but they’re selling out… what’s happening right now is that it’s really showing the audience has the appetite to go out as long as they feel there are safe plans signed off.”

Heather Croall believes audiences may cast their eyes more widely across the Fringe program in 2021.

Ticket sales across all Fringe venues average around 40-42 per cent of total capacity, meaning that while some shows sell out, others only fill venues to around 10 or 15 per cent on certain nights. With reduced overall capacity under COVID-19, and potentially fewer shows to choose from, it’s possible some artists and venues will sell more tickets.

“The tickets that normally sell at 100 per cent will obviously go very quickly but I think it will make audiences cast their eyes wider across the program to shows they may not explore normally, to venues they might not have been too,” Croall says.

“It’s very hard to predict how it will fall. Of course we’re planning for some shavings… but there is optimism to be had.”

Holden Street Theatres was the first South Australian theatre to welcome back live audiences after the pandemic shutdown and has been regularly selling out performances since then. It is preparing to present around 13 shows during the 2021 Fringe, compared with its usual 21-23.

“The program will be smaller but it will still be high quality – that’s the key for us,” says founder and artistic director Martha Lott.

The Hindmarsh theatre hub’s Fringe program usually includes a number of UK shows, with a highlight being the winner of the Holden Street Theatres’ Edinburgh Fringe Award, presented annually to a top show at the Edinburgh Festival Fringe. This is the first time in 13 years it hasn’t been awarded, due to the Edinburgh Fringe being cancelled.

Lott is still hoping to have one UK show on the Holden Street Fringe program, but says the rest of the line-up next year will be Australian.

The three main-stage shows will be: The Twins, a drama from NSW/Victoria performed by Greg Fleet and Ian Darling; new South Australian thriller Dirt, “set against the horrors of the Chechen gay purges” and created by theatre-maker Patrick Livesey (who presented Gone Girls at this year’s Adelaide Fringe); and That Boy, a new work which is being produced in-house and will be directed by Yasmin Gurreeboo and performed by Lott.

“The difference for us is that this year, without as many shows, we can concentrate on creating small-scale touring works to come out of Holden Street using Fringe as a springboard and then going to regional touring, and then hopefully when borders relax, to interstate and international touring,” Lott says.

“It’s a really odd situation because it’s really bad [due to COVID-19], but at the same time it means we’ve got scope to focus on developing the venue and taking a new direction. It’s been really interesting.” 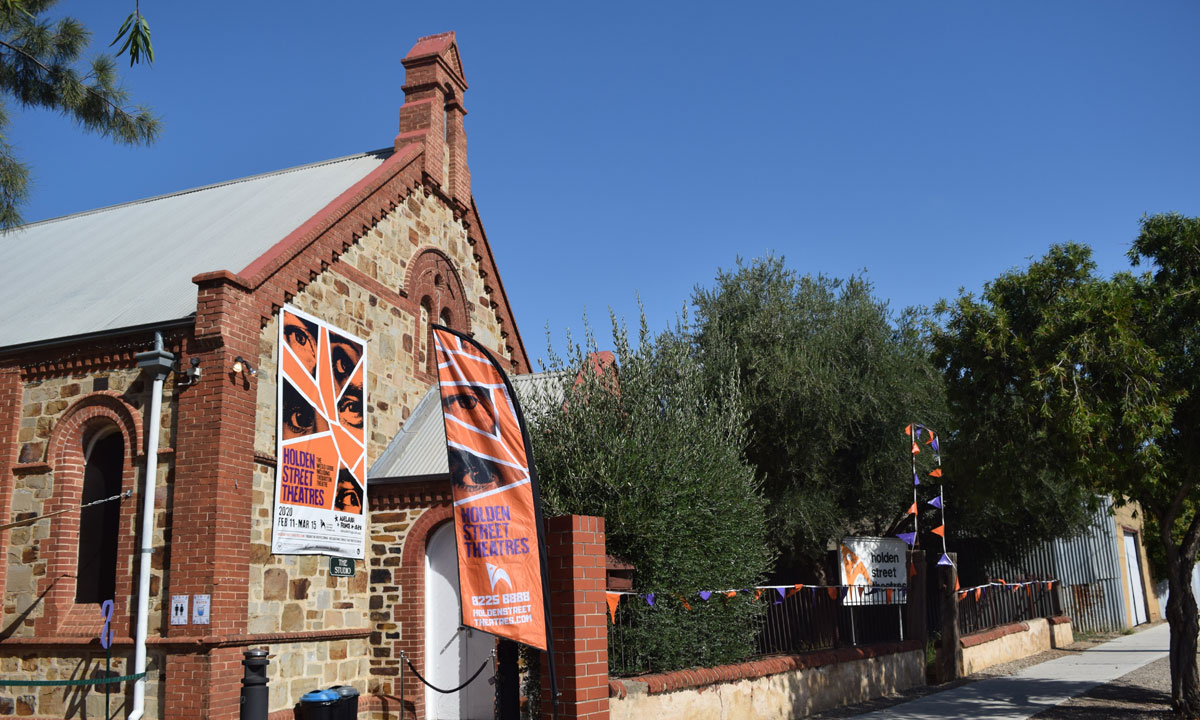 Holden Street Theatres: ‘The program will be smaller but it will still be high quality.’

Local company Hartstone-Kitney Productions has activated pop-up Fringe venues in the Adelaide Botanic Garden for a number of years – specialising in theatre, magic and cabaret – and has announced it will be back in 2021 with three socially distanced performance spaces. They include a new space called AmphiTheatre, described as “a place designed for social gatherings and storytelling under the twinkling canopy of the Milky Way, looking into First Creek and across to the rolling lawns of the Adelaide Botanic Garden”.

While Fringe isn’t yet able to provide a breakdown of the demographics of artists registered so far for 2021, Croall has said previously that around 80 per cent of Fringe acts are usually Australian, with a high proportion of these from South Australia. This means that even with few international artists able to make it to Adelaide in 2021, audiences should still have a smorgasbord of shows from which to choose.

“I think there’s a few myths around – people think all the top-selling shows in the Fringe are international, but when you delve into the facts and data there’s always a strong representation of South Australian shows in the top 20,” Croall says.

This year, thanks to funds from the State Government and donors, Adelaide Fringe has distributed $762,446 worth of grants to help artists present shows at the 2021 event as they rebuild from the impact of COVID-19.

It is also introducing a new ticket price called Double your Applause, which gives people the option of paying double to help artists and venues who can only sell at half capacity: “It’s a way of saying we support you and thanks for coming back to Adelaide Fringe… it’s like putting a tip in the hat for the artist.”

Another innovation is Watch From Home, where venues and artists can choose to livestream shows to paying audience members.

Croall says artists and venues are continuing to come up with different ways of presenting performances safely.

“We might see people doing longer seasons instead of just a few days, and I think there will be more innovative thinking around how to set up the venues… it won’t look the same but it’s exciting to see what it will look like.”

Adelaide Fringe is still accepting event registrations for its online guide for those who want to be part of the 2021 festival. The 2021 program will be launched next month.