When former prime minister Julia Gillard told former leader of the opposition Tony Abbott in 2012 that she would “not be lectured about sexism and misogyny”, the world took notice.

When award-winning Adelaide theatre producer Patrick Livesey takes to the stage as Gillard – sporting signature red bob and pants with built-in hips – and refers to Julie Bishop as her “bish”, the audience cackles. 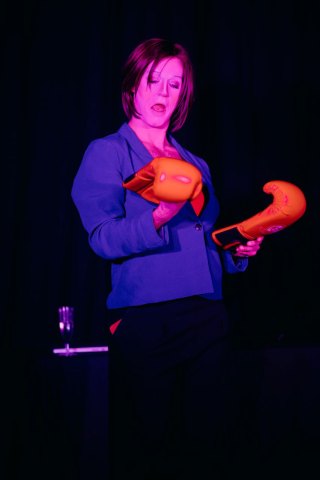 Livesey’s production, Gone Girls, is filled with acerbic wit, careful research and convincing costumes that transform one of the Holden Street Theatres stages into scenes from Parliament House and Canberra’s Lodge.

The satirical script includes back-to-back jokes and dialogue about feminism, but also authentic audio segments and broadcast material from Gillard and Bishop’s careers. By blending fact with fiction, Livesey offers us a glimpse into a suggestible competition and companionship between the pair.

Livesey’s Gillard reminds this reviewer of Kath from TV’s Kath and Kim, portrayed as a ditzy, ambitious but down-to-earth woman who can always call on her girlfriends – like Penny Wong or Tanya Plibersek – for reassurance.

On a set dressed with just two leather chairs and a leather bench, the duo’s acting prowess powers the performance as their characters eventually hatch a scheme to, you guessed it, conquer the patriarchy.

The production is filled with humour, yet it also shows the difficulties faced by Australian female politicians in their quest for recognition and equality. In a video clip depicting the real Julia Gillard speaking at a press conference after stepping down from her duties as prime minister, she said she hoped her career would help pave the way for other future female prime ministers; she hoped the flak she copped wouldn’t be for nothing.

Gone Girls is a show with serious political commentary, but you’ll leave remembering the laughs.

Gone Girls is playing at the Holden Street Theatres from March 5 until until March 15.