Erth’s Dinosaur Zoo, previously seen here five years ago during the Adelaide Festival, provides an opportunity to safely interact with a dinosaur, although for some young audience members the experience is still a little daunting.

Witty presenter Miles begins by introducing three baby dinosaurs and that sets the scene for the next hour. The dinosaur puppets are very life-like and well manipulated by the puppeteers and the show is informative, although it is difficult to convey historical fact while dinosaurs are eating or fighting behind you.

Erth’s Dinosaur Zoo is more like a zoo keeper’s presentation of animals or birds rather than a theatrical performance, feeling on occasions like a lecture or a lesson. It also often relies on the young children interacting with large beasts for the entertainment. 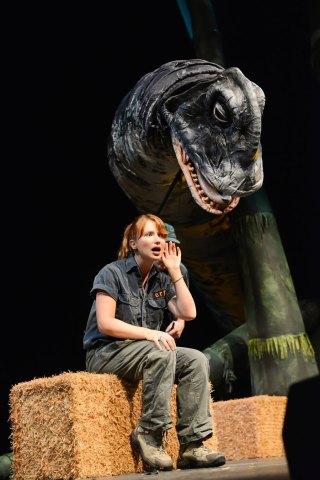 There are exciting moments, such as when the large ancestors of dragonflies fly above and around us, and everyone wants to touch them.

As the show progresses, the dinosaurs increase in size and become more and more impressive; they’ve been created with great skill and look real on stage. The highlight of the experience is when audience members are able to get up close and personal with the prehistoric creatures: to feed them, touch them, be chased by them and play with them.

It’s unlikely the children would retain much specific information about dinosaurs, but Erth’s Dinosaur Zoo gives them a taste of what it would have been like to share the Earth with these extinct creatures.