The story of Circolombia begins around 25 years ago, when co-founders Felicity Simpson and Hector Fabio used a grant from the UK National Lottery to set up Circo Para Todos – a circus school in Colombia that Simpson says was “the first school in the world specifically dedicated to determined youngsters succeeding against the odds”.

In 2005, Circo Para Todos became the country’s National Circus School, with more than 150 graduates completing its four-year circus arts course and going on to enjoy careers as performers.

“It’s extremely hard to get a coveted place and they are terrifyingly good,” says Simpson, who began her own career as a circus performer in the UK and Europe.

In 2006, with the circus school flourishing, she established Circolombia – a professional agency that creates work for the young graduates through touring shows and other productions. It also puts money back into the school.

One of Circolombia’s works, Urban, won an Adelaide Pick of the Fringe award in 2013, and this year Arts Projects Australia is presenting the company’s latest show, Aceleré, in Gluttony from February 14 until March 15.

While the circus school originally worked largely with young people from disadvantaged backgrounds, Simpson says that today it has students from all over Colombia and from many varied backgrounds.

“There’s talent that maybe didn’t have an academic background; people who weren’t able to sit still in their seats and just wanted to bounce and roll and be brilliant – extraordinary youths, you could say.”

Urban highlighted what it is like to be a youth growing up in tough conditions in Colombia, but Aceleré is very different.

After years of internal conflict, the country is in the middle of a fragile peace process and it is clear, Simpson says, that the people want change. There’s a fresh energy in the air.

“This show, I think, represents more what is happening in Colombia [now] … it’s really coming ahead and it’s about providing opportunities and people grabbing those opportunities with two hands and literally throwing themselves into it.

“It’s about how the country is advancing at a really accelerated pace … it’s about [the capital] Bogota as well, which is an amazing, pulsing city that doesn’t stop.”

For the 15 young performers in Aceleré, this will be their first visit to Australia.

Simpson says music, including live singing, is an important ingredient in the show’s appeal, along with the charisma of the acrobats and their interaction with the audience.

“There’s this wildness, energy and incredible dynamism – these talented performers mesmerise audiences with these jaw-dropping circus skills and this energy that is highly infectious.

“It’s a strong individual and collective charisma coupled with their authenticity on the stage – it is very genuine.” 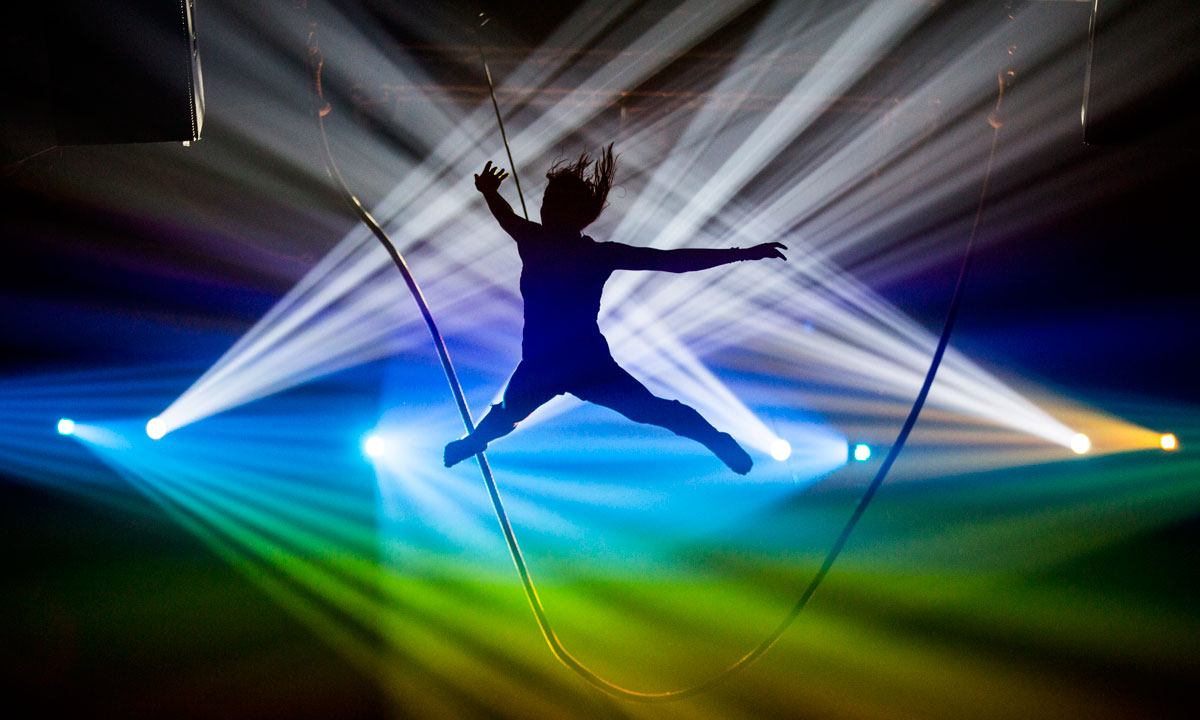 Among the daring feats in Aceleré, one Simpson highlights is the perche routine, which sees a female acrobat perform within a large hoop balanced on another performer’s forehead: “It’s mind-boggling … people stop breathing, they’re so scared.”

Another is the mordaza, performed by two performers named Palomo and Laura, who met through the circus school and perform as Duo Requiem. Aerialist Lara hangs upside down and used her teeth to lift up Paolo, who is also her partner in life.

“And these two, listen to this, they want to get married in Adelaide,” says Simpson. “We actually had the engagement in Helsinki National Theatre, and now we decided as they’re both in Adelaide we can finally organise the marriage.”

Circolombia’s Aceleré will be presented by Arts Projects Australia at Gluttony throughout the full season of Adelaide Fringe, which begins on February 14.