The latest show follows a sell-out 2018 season and opens with a message from the gods before ringmaster Sophia McGrath and her husband Jacob – who created the globetrotting group Dream State Entertainment almost two decades ago – whet the audience’s appetite with some flame-inspired acrobatics. 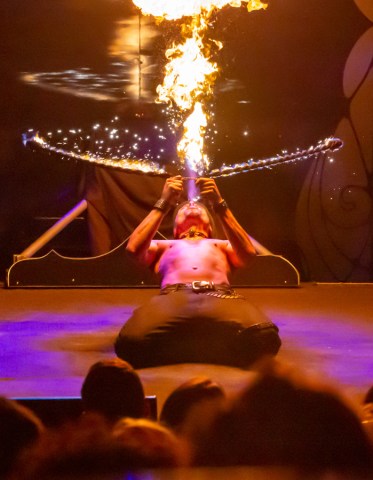 The 60-minute performance then explodes with act after act of extreme circus, including a high-wire acrobat, a fire-eating sword swallower and a nimble archer who fires flaming arrows with her feet while hanging upside-down.

The family-friendly show has some lighter moments, too, such as the introduction of Felina the Great, goddess of passion, who interacts with the audience through a couple of sassy cabaret numbers, and the intermittent return of Sophia to keep the show flowing.

A high-flying bagpiper also makes an appearance with his flame-shooting instrument and a few spins on the highwire that reveal what he has under his kilt.

Just when you think with some relief that nobody has been seriously injured, a knife-thrower takes the stage and flings his blades at the hapless acrobat from the start of the show in an adrenaline-filled finale that has everyone on the edge of their seats.

Tucked in the south-east corner of the ever-sprawling Gluttony, the Empyrean venue takes its name from the highest heavens occupied by the gods of fire and is purpose-built with a giant hole in the roof above the stage to allow flames to leap, high-flying performers to reach for the sky and smoke to escape without choking the audience.

Fuego Carnal reaches into almost every corner of extreme circus and takes several of these ancient dark arts to new levels.

Fuego Carnal is on every day except Mondays until March 17. See more Adelaide Fringe reviews and stories here.