This family-friendly physical theatre show in Gluttony’s Peacock tent starts in a fairly low-key manner, with a couple of dazed-looking guys emerging from a large metal box and proceeding to perform a balancing act on a long plank from the Black Forest (or maybe Bunnings). 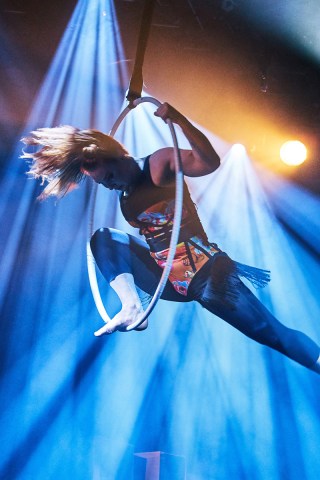 Gradually, more performers enter the stage, dressed mainly in street clothes rather than the glamorous costumes seen in many circus shows.

Adding to the mix is an assortment of curious props, smoke, confetti, coloured lighting, a live drummer and singer, plus – at various times – a ukulele and electric guitar.

The tricks, clowning and music slowly gather pace and by the time a long-haired male acrobat in jeans suddenly jumps backwards onto a chair and then almost casually performs a series of handstands on rickety-looking piles of books, the audience is hooked.

It may be performed under a disco ball, but this is raw, unadulterated entertainment, and that’s precisely the intention of its presenter, Berlin-based Analogue the Company, which was founded with a goal of eliminating artifice from performance.

Its first shows were performed with a small music system, a few simple props and a tent, and Finale – said to pay tribute to the city of Berlin – still has the feel of an impromptu street show.

Without too many extra bells, whistles or sequins, the audience’s attention is fully focused on the artists as they perform routines involving a cyr wheel, aerial acrobatics, dancing, splits, balancing acts and tumbling.

The original soundtrack – with drum beats by the solo percussionist and vocals from sultry-voiced singer Ena Wild – helps drive the performance and give it cohesion, with a highlight among the acts being an innovative juggling routine with sound effects performed to the accompaniment of the drums.

The exuberance of this ensemble of eight is infectious, while the unpretentious nature of their performance makes us feel like we’re all in on the fun. And with friends like these, who wouldn’t want to join the party?

Finale is being presented at The Peacock in Gluttony until March 17. See more Adelaide Fringe reviews and stories here.