Barbu means “bearded” in French. It’s a playful title for a show staged by beautifully bristled Quebecois circus performers, and delivers as a punchline more than once.

The performance charts the evolution of circus in Montreal, from the end of the 19th century up to today – a theme that can at times feel restrictive.

A pair on roller skates spinning and whirling at heart-stopping speed atop a tiny stage is impressive, but in the first half there is often a sense of box-ticking – of watching a history lesson in a ring. And when putting a twist on an old favourite is the default for contemporary circus, this envelope needs more pushing.

It’s not until Barbu embraces cabaret that the show gains momentum and starts to twinkle.

The Cyr wheel solo, a human glitter ball working to a pumping beat, lifts the performance to its climax. While the beards take the title and the publicity shots, the women take the show. The two female performers give mesmerising contributions; particularly impressive is one dancer’s dizzying stunts atop a flying aerial hoop, whizzing high above an astonished audience.

The attempts at comedy are weird and wacky, with a sad-looking guinea pig and an occasional glimpse of “naughty bits”. 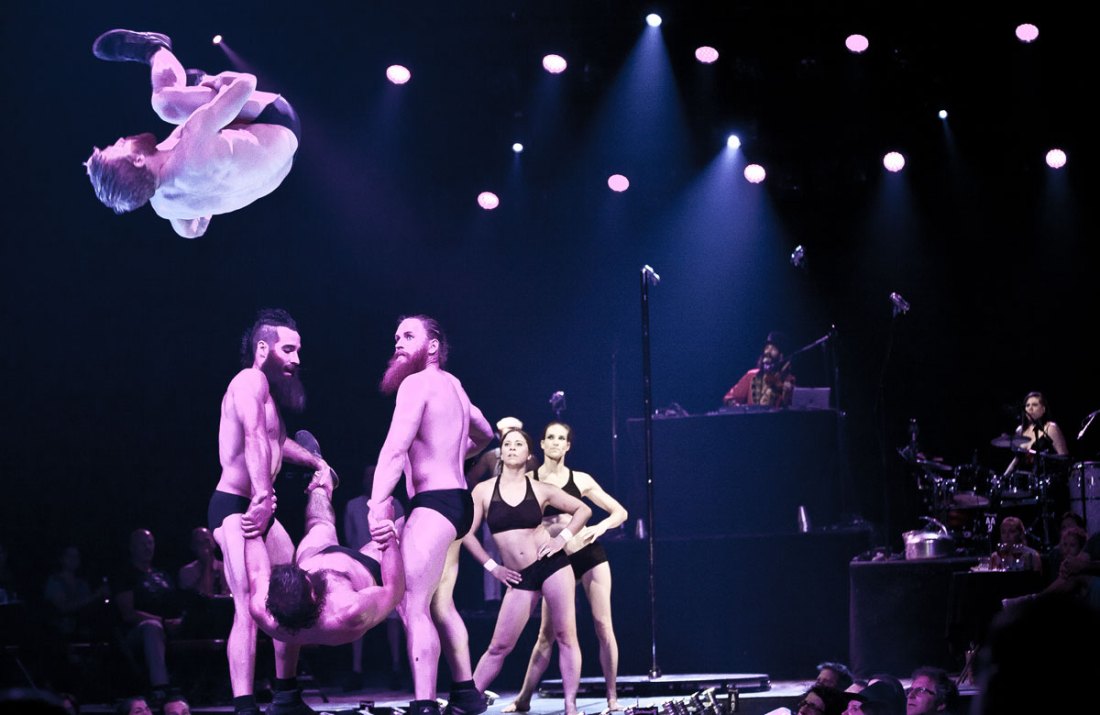 Wednesday’s performance was not as polished as you might expect from a troupe hot off a highly acclaimed season on London’s Southbank. There were dropped juggling batons and hats, a fall into the audience and a scary slip from a seesaw, and the performers seemed to lack energy.

The thundering electro-trad soundtrack of traditional Quebecois music, reimagined with electronic manipulation by the skilful and frenetic trio of live musicians, was the hero of the night.

This style of show is suited to the Peacock venue in Gluttony. While not everyone will have the best view, it allows performers to mingle with the audience. The proximity of the crowd to the action heightens the thrill, as you can see the real risk involved in four men stacking themselves like a totem pole mere feet away.

The freewheeling nature of Barbu can feel careless rather than spirited, but it holds a happy place in the crass fun that Fringe cabaret does so well.

Barbu Electro Trad Cabaret is showing at the Peacock in Gluttony until March 19.