There are plenty of strong men among the acrobats making the trip from Canada to Adelaide for the Royal Croquet Club Fringe show … and they spend much of their time on stage wearing nothing but small undies and big beards.

“It’s a kind of a rave circus show,” says creative director Antoine Carabinier-Lepine, whose biography claims he is from the 12th generation of a family of prestigious wallpaper hangers.

“There’s a lot in the show – a lot of circus but also live music and video. It’s a mix of everything.”

Barbu has a cheeky, humorous and slightly bonkers feel to it, with male and female acrobats performing risky and risqué feats with props including poles, hoops, roller skates and a bed of nails. They’re accompanied by a trio of musicians who play a mixture of electronic music and traditional folk music from Canada’s Quebec province (think violins, banjos and guitars with a Celtic twang).

Carabinier-Lepine says his company, Cirque Alfonse – based in the town of Saint-Alphonse-Rodriguez in Quebec ­– presents intimate cabaret-style circus shows in which there is generally some audience participation.

“The second part is more wild and explores the wild part of circus, so audiences can expect the unexpected.

“We do more weird things; things that are more surprising for the audience. One of the acrobats is juggling with a keg … the big guys are doing pole dancing; there’s magic and human punching bags.”

Production notes claim that political correctness is “deftly brushed aside” during the performance, but Carabinier-Lepine says it is “more funny weird than incorrect … people are not going to be shocked”.

As for the beards, they aren’t a hipster fashion statement. The male members of the troupe originally grew them for another show called Timber, inspired by the exploits of early American lumberjacks, and have never shaved them off.

“We all grew our beards for that show so for five years we have had the beards … it is kind of our brand for now.”

Barbu Electro Trad Cabaret will be presented in The Panama Club at the Royal Croquet Club from February 12 until March 14 during the Adelaide Fringe. 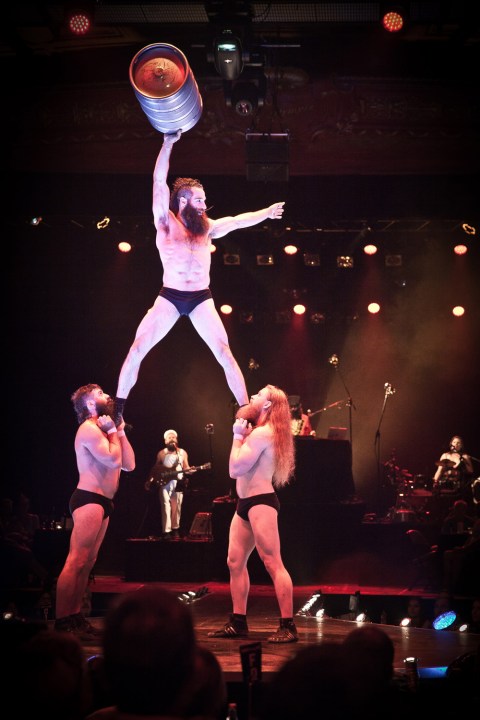